In the middle of the most serious cost of living crisis Ireland has seen for decades, a pay raise is on its way for senior civil servants, judges, and hospital consultants. 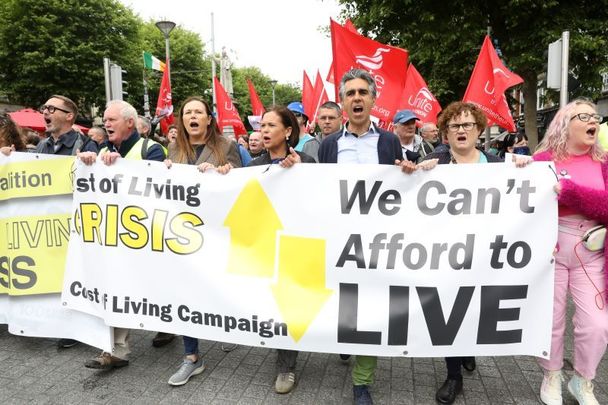 June 18, 2022: Sinn Féin President Mary Lou McDonald with Sinn Féin spokesperson on Enterprise, Trade, Employment and Workers' Rights Louise O'Reilly and protesters with placards during the Cost of Living protests on O'Connel Street Dublin. The demonstration is about a rise in wages and the minimum wage. RollingNews.ie

For Ireland’s top-paid officials, Christmas is coming early this year.

At a cost of $32 million for the remainder of 2022, salary increases ranging up to 15 percent will be added to pay packets from the 1st of July as pay rates that were cut in the wake of the economic collapse following the banking crisis are restored. For those struggling to make ends meet, there will be no additional support while the fat cats get fatter still.

Emergency legislation was used to cut the pay of public servants as part of the austerity measures introduced following the financial crash of 2008, and while most – almost 99% – have had their pay restored, there remains up to 4,000 people on the public payroll all earning over $158,000 a year who will benefit from this decision.

What makes this move unpalatable for the majority of people is that it comes at a time when the government has stated that those struggling to pay their bills will have to wait until October for any assistance. In the face of ever-increasing costs, it’s a tone-deaf decision from those in power.

In common with most European countries the price of energy, fuel, and food have increased, with inflation in Ireland now at its highest rate since the early 1980s. A Eurostat report published last week showed Ireland was the most expensive country, along with Denmark, to live in in 2021.

However, things have just got worse in the past 12 months with headline increases in electricity prices which have jumped by 41 percent in the last year, gas by 61 percent, while home heating oil rose by over 100 percent. Increases in petrol and diesel have hit delivery costs ensuring all essential goods cost a great deal more.

The evidence pointing to increased financial hardship is mounting. The runaway household bills are leading to an increase in callers to Ireland’s largest charity, SVP, which had 78,000 calls for help by the end of May, an increase of 20 percent on last year.

Social Justice Ireland, in a recent report, estimates that there are almost one million people living in poverty at the moment. According to a national poll, 63 percent of people have no disposable income after paying everyday bills, with those who most feel the increased pressure from the rising cost of living being those with less in the first place.

Along with statistical indications, there is also plenty of anecdotal evidence. A woman on national radio talking about unexpected car repairs which prevented her from buying food, a politician talking about a parent needing a loan to pay for childcare, staff in the children’s charity Barnardos witnessing families going without and cutting back, being forced to choose between having the heating on or having food in their cupboards, and children missing social activities because parents are facing financial distress.

In response, the government has taken a number of measures including reduction in VAT rates, increased public transport subsidies, and earlier this year gave a $220 credit towards electricity bills to every household, regardless of income.

However, eaten bread is soon forgotten and opposition spokespersons are seeking more, claiming that ministers are “sitting on their hands” when they should be taking decisive action. Street protests have taken place in the major cities organized by a coalition of political parties, trade unions, and social activists. Their main demand is a mini-budget to increase social welfare payments immediately.

So far, the government has refused to budge from the scheduled October budget date, although there is much speculation that they will not be able to hold the line. Internal disagreements on the best approach to take have led to mixed messaging and threatened the stability of the administration.

Pressure on the public finances is also coming from trade unions which are engaged in negotiations over a pay deal for the public sector. Again, these talks are dominated by the rate of inflation.

Officials from the Department of Public Expenditure have made an offer of five percent over the next 18 months, but this has been rejected with worker representatives who are seeking twice that amount.

Negotiations are currently at a standstill. Having come through a sustained period of industrial relations, harmony indications are not encouraging, and unless the deadlock is broken, a winter of discontent beckons.

This then is the political and economic landscape in which the decision to award the back pay to top earners is taking place. While the minister for public expenditure has said that they took legal advice in an attempt to postpone the pay restoration and was told that wasn’t possible, frankly it is not a good time for the government to be demonstrating largesse to the very well-off.

Truth is public sector bosses in Ireland are very well paid compared to their European counterparts. Most of the pay awards will go to hospital consultants, and here again, we have the different approaches to those who are high earners and those who are not.

While pay restoration will go ahead as planned for one privileged group, those who also valiantly served on the front line during Covid are left waiting for their €1,000 bonus. Many nurses and other medical professionals who were promised the bonus are still waiting either for the money, or in some cases, for agreement that they are eligible to get it in the first place. All grist to the mill for those who accuse those in power of promoting a two-tier approach to the economic well-being of its citizens.

Who said governing was easy? Separate issues of rampant inflation, cost of living increases, public pay negotiations, and pay restoration have coincided to create the proverbial perfect storm for Taoiseach Micheál Martin and his ministers.

Their options are limited. Do they put more money in people’s pockets, essentially chase inflation and by doing so effectively add to it? Or maybe they should have a targeted approach, focusing on those most affected through subsidies and price caps?

How this is handled will have economic repercussions for years ahead. It will also decide the longevity of this government.

*This column first appeared in the June 29 edition of the weekly Irish Voice newspaper, sister publication to IrishCentral. Michael O'Dowd is brothers with Niall O'Dowd, founder of IrishCentral and Irish Voice.