P.J. Harvey reflects on his time volunteering with presidential hopeful Robert F. Kennedy in the 1960s. 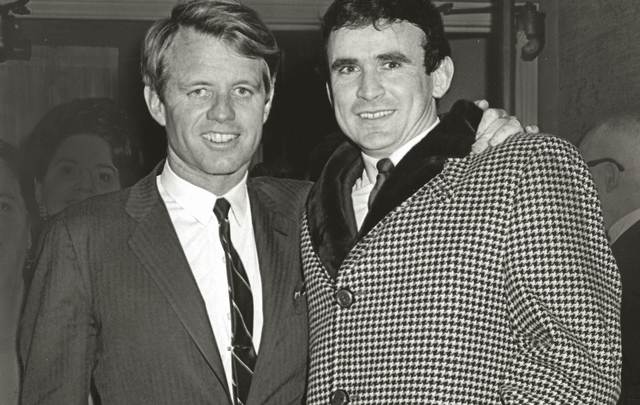 I'm proud to say that I was a volunteer, in my younger days, for the late Robert F. Kennedy when he was campaigning for the United States Senate in 1964 from New York.

There were about 10 of us from different counties in Ireland, all crazy young fellas dancing in the City Center, the Jaeger House, the Tower View Ballroom, and others.  Despite our youth and zest for life, RFK gave us a great interest in politics. We believed in him, and he was a very special person.

He was running against the incumbent, Kenneth Keating, and there was a debate scheduled at 8 p.m. on a Monday evening. But Keating never showed and Kennedy debated an empty chair.

The media gave him a seven percent jump in the polls the next morning. RFK easily won the election despite Governor Nelson Rockefeller and the rescue squad.

We as young fellas had no interest in politics before that, but now we had a person we believed in.

It was just before St. Patrick’s Day 1968 when RFK declared for the presidency of the United States of America.

He went on to win all the primaries except Oregon. The last primary he won was California, which was considered the big prize.

Then it was supposed to be on to Chicago for the Democratic National Convention, but unfortunately that night in Los Angeles at the Ambassador Hotel, RFK was assassinated due to a shocking lack of security.  There was nobody guarding him and as he was exiting the hotel through the kitchen, a man pulled out a gun and shot him.

RFK lived through the night. We all lit candles, hoping against hope, but he passed away the next morning, June 6, 1968. He was only 42 years old.

We missed him terribly and our hearts were broken. Most of us volunteers, including myself, never again took the same interest in politics. And most of the fellas I was friends with at that time have passed on.

My time as a volunteer with RFK is a treasured memory, especially during these dark pandemic days.

(P.J. Harvey is the founder of the annual Co. Clare benefit golf outing in Douglaston, Queens which will take place this year on Thursday, July 29.)