"The treatment of foreigners, of refugees, of immigrants must be seen first and foremost as a moral issue, an ethical challenge for people to decide in terms of what is right and wrong." 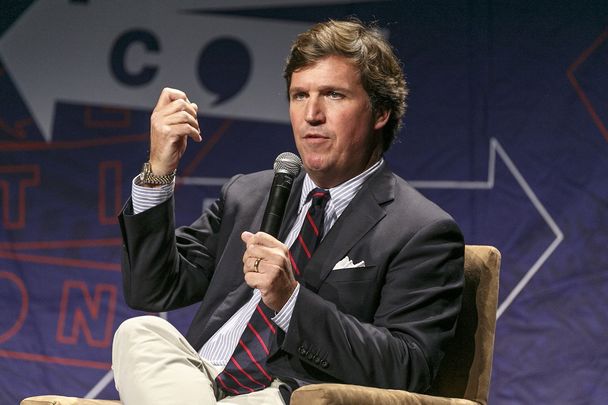 Tucker Carlson, a Fox News pundit and a proponent of the replacement theory. Getty Images

The economic and political impact of immigrants and refugees on American lives has become a lightning rod issue, sparking strong feelings on both sides of a widening political divide.

Many people, nearly all associated with the Republican Party, feel that foreigners, mostly coming from Central and South America, take the jobs of locals and, if allowed to settle, will eventually lead to Democrats stealing political power in Texas and beyond.

Opposition to non-white immigrants is often wrapped up in what is now dubbed the Great Replacement Theory. Americans first became aware of this cockeyed idea when far-right activists organized a rally in 2017 in Charlottesville, Virginia, and they marched through the center of the town chanting menacingly about Black Lives Matter and Identifying Jews as heading up white replacement strategies. One counter-protester, Heather Heyer, was murdered by a neo-Nazi driving his car at full speed into the crowd.

This “replacement” language is part of anti-immigrant, nativist rhetoric that claims that white people are being purposely replaced by black and brown immigrants, some from Muslim countries, primarily damaging the Western European countries and the United States. In their eyes white power is disintegrating fast in the West.

President Trump, commenting on the events in Charlottesville, offered a strong measure of approval to the marchers by proclaiming that there were good people on both sides, effectively declaring his neutrality between white supremacists and legitimate protesters like Heyer opposing those destructive beliefs. This normalization of extremism provided a major boost for these alt right groups.

Voltaire, the brilliant French Enlightenment philosopher in the 18th century, warned that “those who can make you believe absurdities can also make you commit atrocities.” The explosive growth of right-wing militias and racially motivated attacks since the beginning of this century clearly affirms the Frenchman’s insight.

Predictably, Fox News presenters Tucker Carlson and his sidekicks, Laura Ingraham and Sean Hannity, have joined in the chorus accusing Democrats of trying to lure immigrants into America for political advantage. Carlson laid out his absurd rationale for accusing them of enticing non-white immigrants to come to the United States: “This Democratic policy is called the great replacement – the replacement of legacy Americans with more obedient people from faraway countries.”

More than half of Republican supporters believe the Big Lie, that Trump won the last presidential election and, consequently, Joe Biden is seen as an impostor in the White House. Lawyers led by Rudy Giuliani made their case for a fraudulent election without a scintilla of evidence, and dozens of judges rejected their claims out of hand.

The attack on the Capitol on January 6 was an attempted coup that took place at the behest of then-President Trump with the open approval of some top Republicans. Ominously, many of these leaders pledge that they will be better prepared to respond if they lose the official count again in 2024.

Amazingly, the right-wing ludicrous tale of scheming left-wing leaders in Washington operating a serious plan to bring in immigrants from non-white countries so that Democrats in the future can rule with big majorities in the House and Senate is propounded by the big names in Fox News as well as an increasing number of Republicans in Congress and in various state houses.

This preposterous narrative recalls the powerful Know-Nothing party in the 19th century claiming that the waves of Catholic emigrants from Germany and especially from Ireland represented a Vatican strategy to dominate the United States. Then and now, wild stories that point a negative finger at foreigners are gleefully swallowed by nativists who believe any story that confirms their prejudices.

Remember Trump proclaiming as his signature issue in his quest for the presidency that crowds of Mexicans were invading Texas, raping the local white women and selling drugs throughout the southern states and beyond. Ironically, he got more than a quarter of Latino votes in 2016 and increased that percentage by a few points in his second run for the White House in 2020.

Some Republican strategists, reflecting on these numbers, must be wondering how their candidates would do if they actually welcomed Hispanics instead of demonizing them.

Close to 75 percent of Americans believe that immigration is a “good thing” for the country. In fact, America needs more – not fewer – people coming from other countries because the population here is rapidly aging.

In the last half-century, we have moved dramatically from five workers for every retiree to a current ratio of close to three to one. Predictions by economists suggest that in the next quarter-century, at the present rate of change, America will be down to just two workers for every person on Social Security, which the experts say is unsustainable.

New arrivals comprise about 15 percent of the population in the United States, but they are 80 percent more likely than those born locally to become entrepreneurs. First and second-generation immigrants have started businesses from owning the local delicatessen to small construction companies and tech firms. South African native Elon Musk builds his Tesla cars in California, spawning over 50,000 jobs as well as injecting more than $4 billion into the economy.

Talk about immigrants committing more crimes than others is repudiated in an important study by the prestigious Cato Institute completed in 2016. It shows that the homicide conviction rate per 100,000 among the general population is 3.2 while among illegals it registers at 1.8, and half that among the foreign-born who arrive in the country legally.

The Congressional Medal of Honor is the highest distinction awarded by the U.S. government for “intrepidity at the risk of life, above and beyond the call of duty” by members of the U.S. armed forces. About 3,500 have received this prestigious award since its inception in 1861, and over half were earned by Irish-born men or their descendants.

Silicon Valley, a glowing symbol of American ingenuity, is largely populated by Asian American workers. This group was treated particularly harshly in the United States in the past, with Chinese people refused citizenship a hundred or so years ago because they were deemed to have racial characteristics that made them incapable of self-rule! Now they are leading a boom in the world economy.

The treatment of foreigners, of refugees, of immigrants must be seen first and foremost as a moral issue, an ethical challenge for people to decide in terms of what is right and wrong. Certainly, the writers of The Bible repeatedly reminded their audience – 36 times according to scholars – that Judaism was born out of the historical experience of marginalization, so they are instructed again and again about their solemn obligation to welcome and provide hospitality for the foreigner because they must always be cognizant that they were slaves in the land of Egypt.

The various versions of the Jewish and Christian faiths in the United States all accept this core belief but, unfortunately, the inhuman chaos at the southern border and the widespread anti-immigrant rhetoric suggest that the magnanimous biblical teaching is mostly disregarded in America.