Despite what President Donald Trump may say, he lost the election. 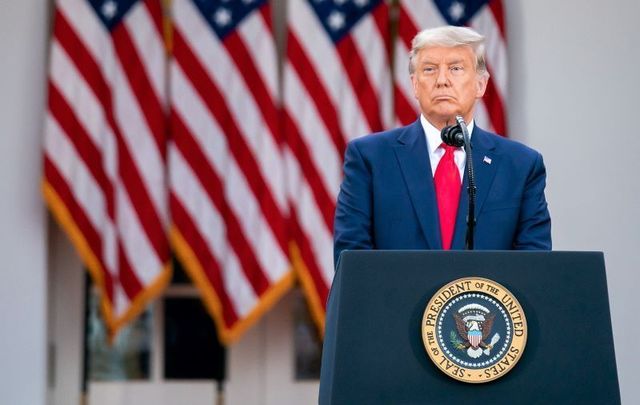 The White House is the people’s house, not the exclusive domain of any politician or potentate no matter what party.

*Editor's Note: This editorial first appeared in the November 18 edition of the Irish Voice newspaper, sister publication to IrishCentral.

Americans fought and died to make the White House the home of the duly elected person who can serve a maximum of eight years there.

Every four years the occupant of that glorious mansion at 1600 Pennsylvania Avenue is tested by the will of the people who give their say so on whether he (and it has been he for 45 presidents) should remain in the exalted place.

This November 3, the people judged that the current occupant, Donald J. Trump, should exit stage left.

It was not even close. With a difference of more than five million votes and 74 Electoral College votes, Joe Biden was the overwhelming pick of the American voting public.

Trump was resoundingly defeated. The American people had seen enough.

But Trump in his wisdom concocted a cock and bull story that the election was stolen, rigged, snatched illegally from him.

For years the Dems have been preaching how unsafe and rigged our elections have been. Now they are saying what a wonderful job the Trump Administration did in making 2020 the most secure election ever. Actually this is true, except for what the Democrats did. Rigged Election!

He so far has refused to concede, even though every court in every state he has contested has tossed out his claims of voter fraud.

He only won in the eyes of the FAKE NEWS MEDIA. I concede NOTHING! We have a long way to go. This was a RIGGED ELECTION!

He has even considered dumping democracy and forcing the electoral board members to change their vote and pick him instead. Incredibly the media has glossed over that act which can only be described as criminal, perhaps treasonous.

Trump’s own Department of Homeland Security announced that the election "was the most secure in American history" and saw no reason to cry fraud of any kind.

The unreality show has continued now for days. Trump has refused to allow his staff to cooperate with the incoming team. He has ignored the Covid crisis, and governs by watching cable television.

Trump has gathered around him the usual cultish figures, most of them leaders of the formerly proud GOP who have once again turned reality on its head and agreed with Trump that there might have been voter fraud and they can’t say for sure what the election result is.

Meanwhile, Trump belts out the latest cuckoo concoction, via his Twitter feed every day. Donald in Wonderland is a rabbit hole he fell into where he is still president, Biden is a loser and impostor and he sees no reason to concede.

If Trump persists it will not end well. Last week, General Mark Milley, the chairman of the Joint Chiefs of Staff made clear his oath was not to the president but to the Constitution.

That Constitution makes clear that the defeated president leaves office and the duly elected president takes his place on January 20, 2021, at noon.

Either way, escorted quietly or dragged kicking and screaming, Donald Trump will vacate office on January 20 and normalcy will return to the American presidency. Finally, the latest and worst chapter in the history of the presidency will be over. We can hardly wait.