With over 100 babies born into emergency accommodation in the past year, Ireland needs to find a solution to its lack of housing and sky-rocketing rents. 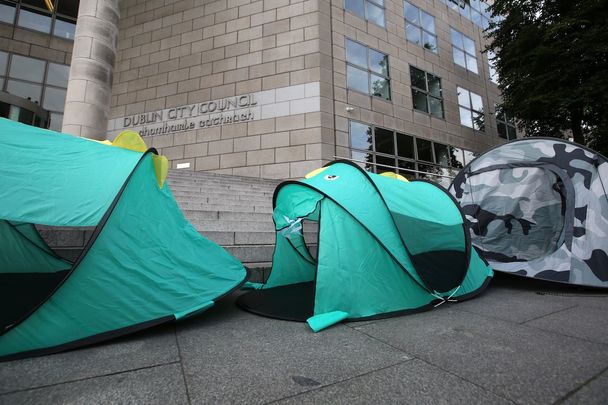 As over 10,000 people in Ireland are now homeless, protests are held outside Dublin City Council over lack of provisions and planning. RollingNews

With over 100 babies born into emergency accommodation in the past year, Ireland needs to find a solution to its lack of housing and sky-rocketing rents.

A few weeks ago all the papers here carried a picture of a little boy sitting on a footpath in Dublin city center eating his dinner off a piece of cardboard. He and his mother are homeless, not on the streets but living in state-funded "emergency accommodation" in a hotel room where there are no cooking facilities.  The food the boy was eating was provided by one of the charities that serve up wholesome, hot meals on the street to the homeless several days a week.

No doubt the little boy was enjoying his dinner—and as his mother said it was healthier for him than the fast food and takeaways they survive on most of the time in their hotel room.  But it was a bitterly cold night and it made a heartbreaking picture.

Is this what Ireland has come to, people asked angrily the next day.  Is this the best we can do, when a kid has to eat his dinner sitting in the cold on the sidewalk?

That was a few weeks ago and it made headlines the next morning, prompting more reporting on the housing crisis.  But within a few days the news cycle had moved on and the little boy was forgotten. The reality is that he may well be lining up for a hot dinner on the streets of Dublin as you read this.

The housing crisis is the biggest problem we face and no one knows how to solve it: not the government, not the construction industry, not the experts or economists, not anyone.

And there is a reason for this.  The problem is complex and contradictory and there is no easy quick-fix solution.  If there was one the government would be jumping on it, not least because there are four by-elections next week and a general election in six months and housing is going to be a hot issue with voters.

We have been through the historic causes of this crisis several times in this column—the boom, the housing market collapse, the crash, all of which brought the country to its knees a decade ago.

During the boom, the number of home completions rose each year until it peaked at an incredible 88,200 in 2006.  Then the market turned and in the next few years, it imploded, with home building coming to a complete halt and thousands of construction workers emigrating.

That's one reason why we are in this mess now.  No houses or apartments were built in the years that followed the crash, so we are way behind in the number we need.  Skilled construction workers switched jobs or left the country and most have not come back, which has made ramping up building again difficult and expensive.

The last few years have seen some improvement as the economic recovery here has powered ahead.  But the recovery in the construction sector has been much slower and the housing shortage has continued.

In fact, the economic recovery has exacerbated the problem since we have a growing population looking for homes, especially in the Dublin area.  This was illustrated starkly last week when the Central Bank pointed out that for every twelve new jobs created in Dublin over the past five years, only one new home was built.

Despite the impression this gives, building nationwide has been increasing but it's from a very low figure of just a few thousand homes a year just four years ago.  Around 15,000 units were built in 2017, 18,000 were built last year and this year more than 20,000 homes will be finished. The prediction is that at least 25,000 new homes will be completed next year.

So we are heading in the right direction, although this is still way below the 35,000 new homes we need to build every year for the next decade to meet demand.  And as we said above, the market at present is complex and full of contradictions, which is slowing progress.

The lowest point in property prices was reached in 2013, but because of the economic recovery and the shortage of homes prices have recovered to the point where they are now 85 percent of the level they had reached before the crash.  So you would think that building companies would be working around the clock to take advantage of this.  But they're not—and this is where the market seems contradictory.

Despite the shortage, demand for homes has slowed and prices have leveled off—in Dublin prices have actually fallen slightly in the last three months.  The reason is that it is still very expensive to build homes here (due to staff shortages, high wages and other costs including taxes), and the price of homes in Dublin has now gone past what many ordinary buyers can afford.  An additional problem for potential buyers is that the shortage of homes has led to soaring rents which means they can't save for a deposit.

The Central Bank rules to prevent people from getting into trouble again require that first-time buyers need a deposit of ten percent and the amount they can borrow is capped at three and a half times their pay.  The average price of a home in Dublin in the latest figures was €368,000, but in the better areas around the capital, it is at least €450,000 and a lot more in the most desirable areas, even for a modest home.

That is beyond what most couples can manage, including young state workers like teachers, nurses, gardaí, etc.  The market has passed the point of affordability. Even though there are a shortage and high demand, sales are sluggish and construction in recent months has slowed.

This slowdown and the difficulties faced by young couples trying to buy a house have prompted calls for the Central Bank to relax its 3.5 times pay rule to let people borrow more.  But the Bank so far has refused, fearing this would simply lead to even higher house prices and people ending up in negative equity if there is another downturn.

There have also been calls for the government to do much more to curb the soaring rents here, even though increases are now limited to four percent a year in many areas.   It's not unusual now for couples in Dublin to be paying more than half of their disposable income in rent.

Despite the high rents, however, the reality is that individual landlords are leaving the sector, fed up with the high tax which takes most of their profit and the extra regulation and red tape which increases their costs.  Into their shoes have stepped international and Irish property investment funds with huge resources -- there has been a 40 percent increase in the purchases of homes by so-called "non-householder buyers" this year -- and these bodies are not in the business of supplying cheap accommodation.

The main criticism of the government's overall housing policy is that it is relying too heavily on the private sector to solve the crisis.  Government ministers regularly are berated by journalists on the radio asking simplistic questions like, why don't you just build more social housing?   The reality is that it's not that simple.

Firstly, there is a critical shortage of skilled building workers, as noted above.  And even if they were available, the days when local councils can run major building programs are long gone.

Decades ago this work was passed on to the private sector because of gross inefficiency in council operations.  The expertise is simply not there at the council level anymore.

Secondly, the state has already made it mandatory that all new developments must have a proportion of social and affordable housing.  Although this helps those with lower incomes, the effect is to make the rest of the development more expensive.  And the people who pay that extra bill are young couples who are saving every last penny to buy a place of their own and who don't qualify for social or affordable housing because they are over the income limit.

The answer to the overall problem is always going to be more and more homes being built by developers, the effect of which will trickle down to all levels, lowering both purchase prices and rents.  In an effort to accelerate this, the government has simplified the planning structure for schemes of over 100 homes and made other changes to encourage builders.

But it's going to take time, probably another five years before home completions reach the required level to stabilize the market and get prices and rents down to a reasonable level.

It's also worth noting that building lots of social housing is not always sustainable, despite the hue and cry by some media commentators and politicians on the left.  Even though social housing rents are very low, more than half of Dublin City Council’s 24,400 tenants are behind on their rent, with 20 percent of them more than six months in arrears.  Yet no one is ever evicted because then they present as homeless and the council has to put them up in emergency accommodation to keep them off the streets.

Certainly, the soaring rents in the private sector have meant that many low-income, often single-parent families have lost their homes and ended up in emergency accommodation. This is outside their control and leads to heartbreaking situations, like the little boy on the street eating his dinner off a sheet of cardboard.

But in at least some cases, just as with council tenants who won't pay their rent even though they can afford a big TV and have a car, there is a lack of personal responsibility involved.  More than 100 babies were born to women in emergency accommodation in the past year.