The “privilege” of being Irish American

As debate and protests surrounding America's history, oppression and privilege we would do well to look at where the elite are made. 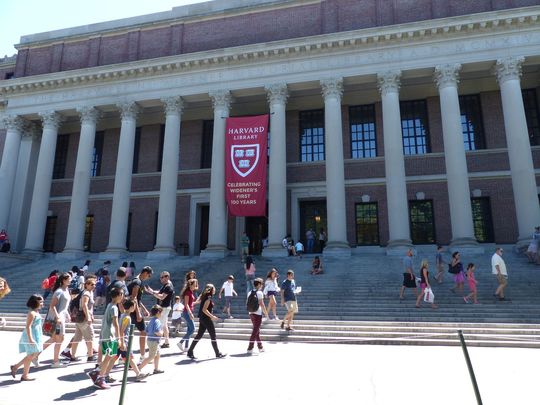 "Far too many white folks get defensive about a version of American history to which they have no connection whatsoever."

Most people just call him “Fitz.” He grew up just outside of that very Irish city, Boston, in the late 1950s and early 1960s. His parents ran a gas station and a convenience store.

Meet William R. Fitzsimmons, dean of admissions at Harvard University -- he graduated from there in 1967 -- for over 30 years.

Does Fitz, clearly a working class outsider, prove that there is actually hope in America’s future? Or does Fitz represent an elite that refuses to open up its exclusive club?

Tough questions for tough times. In recent weeks, on top of losing a fight to a deadly virus, we have been forced to have some very serious discussions about history, oppression and privilege. And who has had a fair chance to thrive in this country, and who hasn’t.

It doesn’t take long for this discussion to get messy. And it has nothing to do with those club-swinging MSNBC and Fox News crowds charging at each other like some battle scene from Braveheart.

At the center of this debate is the blood-drenched history of African Americans in the U.S. They are at the forefront of the protests against police brutality, pro-slavery Confederate memorials, and economic injustice.

But this does leave, as The New York Times noted this week, Latino immigrants and their children “trying to figure out where they fit in the national conversation about racial and ethnic discrimination.”

Some white folks, meanwhile, have reacted by grabbing their guns and MAGA hats. Yet even so-called “allies” are sometimes doing as much harm as good.

With emotions so raw, and stakes so high, it’s not a good time to be asking where Irish Americans and other children and grandchildren of European immigrants fit into all this.

Yet, go ahead and try to comment on reparations for African Americans without getting an earful about impoverished Famine immigrants, or so-called “Irish slaves.” And who was out there defending a Christopher Columbus statue in Baltimore this week, but a group of Italian Americans?

Wherever you stand on these issues, it does not help anyone when we talk about white folks as a monolithic blob. If we are going to have these hard debates about race and privilege, we’ve got to acknowledge that some American journeys began at places like Ellis Island, and others with vast tracts of free and fertile farmland on prairies soaked with the blood of indigenous people.

Far too many white folks get defensive about a version of American history to which they have no connection whatsoever.

On the other hand, privilege (or lack thereof) is definitely a real thing.  It’s just not always a one-size-fits-all kind of thing. Maybe it exists on more of a spectrum and benefits some more than others.

Which brings us back to Fitz, and other Irish Americans who’ve achieved success despite humble beginnings.

Tragically, many of us end up bickering over the virtues of sacrifice over protest or competing in a misery contest.

In doing so, we let elite institutions off the hook. We focus on why some guys like Fitz did it. We rarely ask why a place like Harvard has -- or should have -- so much power in the first place.

Recent studies indicate that just 40 elite American universities right now have more students from the top one percent of income (nearly $700,000) than the bottom 60 percent ($65,000 or less).

Think about that the next time you start bickering with a person whose socioeconomic status is not very different from yours. You scream. They scream.

And someone, somewhere, quietly sends another check to Harvard.