An emigrant's praise of Irish rain

IrishCentral contributor Patrick McKenna reflects on how he thought emigrating to Montreal from Belfast would mean the end of frequent rainy days. 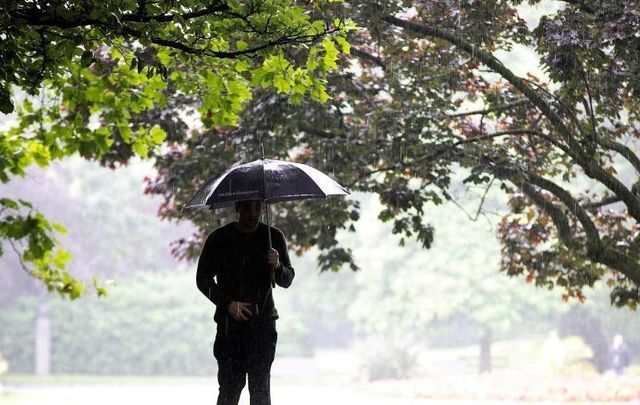 A rainy day in Ireland. RollingNews.ie

In the beginning of my so-called new life in Canada, when people asked me why I left Belfast I’d sometimes reply, half-jokingly, that the never-ending rain had become just too much of a drag on my general joie de vivre.

I’d explain that while growing up in Northern Ireland, rain was the backdrop to so much of my life. It rained as I waited for the bus that took me to school; it rained as I delivered newspapers and it rained as I cycled around Northern Ireland camping or Youth Hostelling. On dreary winter Sunday afternoons, the rain kept my siblings, along with mum, dad, and me, indoors, huddled around the coal fire, in the living room, watching an old British war movie on our black and white TV. By the time I was in my early twenties, living somewhere with less rain seemed a fairly good reason to emigrate.

If I thought that in Canada there’d be less rain, I was wrong: Montreal, where I live, gets almost the same amount of precipitation as Belfast – about 1,000 millimeters per year – and much of it falls as snow which costs the city – meaning taxpayers - hundreds of millions of dollars every year, not to mention a great deal of inconvenience to all.

Summer rain usually falls as a downpour that can overwhelm the storm drains and cause flooding.  Unfortunately, by the time I realized that emigration hadn’t really gotten me away from the rain, it was too late to do much about it.

Then as years passed and as I travelled here, there, and everywhere, I learnt that there’s much worse than Irish rain. In regions threatened by drought and desertification, or by bush or forest fires, people would love to have some soft Irish rain.

While in Zimbabwe, in the third year of drought, I found myself imitating the locals, studying the sky, looking for traces of clouds. In Harare, someone told me, “In Africa, Patrick, water is more precious than blood.”

It was a Bangladeshi friend who revealed the festive nature of rain when she explained how, when the monsoons broke, she and her brothers and sisters splashed danced on the flat rooftop of their home in Dacca accidentally showing the same spirit as Gene Kelly in his famous dance sequence in “Singin’ in the rain”.

On one of my trips back home, on the airport bus into Belfast, I sat with a gentleman from Atlanta and since it was – as usual – raining, I felt I should apologize.

“Not at all” he replied, “after two months of summer heat, I called my travel agent and told him I wanted to go someplace cool, somewhere where it rains. So here I am. I’ve no problems with this cool Irish rain.”

I’m sure that for some Irish writers, the rain paid off. Interviewed on C.B.C. (Canadian Broadcasting Company) radio, that great lady of Irish literature, Edna O’Brien, said this about Irish rain: “It’s great for the writing but bad for the living." I wondered if she’d have become the author she is if County Clare had basked under sunny skies such as those of Tuscany in Italy, or “County Bondi” (Irelands 27th county) in Australia? – Perhaps, despite the lure of the sunny outdoors, she would’ve sat in her room and wrote but then again, she might not have.

Montreal isn’t New York but it is one of those big North American cities that have sleeping problems. On summer nights in my apartment, despite its being perched forty or so metres above street level and on the back of the high rise, I hear a fair amount of noise -- cars braking and then racing away from the lights, tire sounds, sirens from emergency vehicles, a drunk shouting in the alleyway down below and so on.

A few years back, in midsummer, I woke in the wee hours and realised that my apartment was unusually quiet – I didn’t hear the usual cacophony from the street or the back alley and it took me a few minutes to figure out why. The reason was simple. It was raining. I understood then that rain absorbs and disperses sound waves, slows traffic, softens the noise of tires on asphalt, and sends noisy partygoers indoors. In fact, the only sound that had made its way into my apartment was a gentle pitter-patter of raindrops on my balcony: “How peaceful”, I thought, as I fell back to sleep with a new and more positive outlook on rain.

So, today, to any of my nephews or nieces wanting to emigrate to get away from the rain I’d reply, “You sure about that? - Maybe all you need is a bigger umbrella.”