Our writer Dermot McEvoy was told by Paddy Power his €1 bet on Trump was a loser before the votes had even been cast. 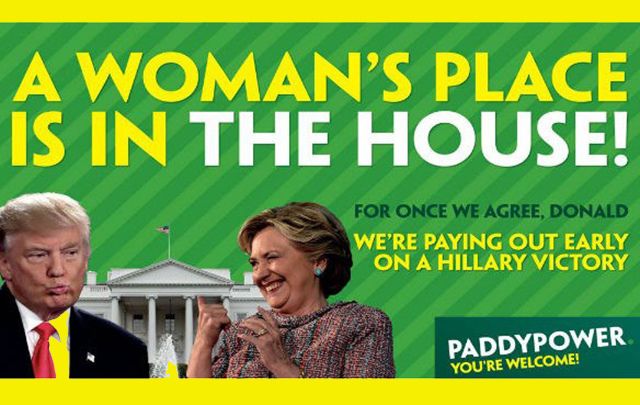 Our writer Dermot McEvoy was told by Paddy Power his €1 bet on Trump was a loser before the votes had even been cast. Paddy Power

Irish bookmakers Paddy Power made a fatal error last October when they decided odds looked too much against now-President Donald J. Trump ever winning the election and started to pay out on a Hillary Clinton win.

Like Donald Trump, I was apparently on a losing streak.

As Trump’s poll numbers continued to collapse, Paddy Power made the decision to pay off on Clinton, referring to her as a “nailed-on certainty to occupy the Oval Office.” They ended up paying out more than $1 million in bets placed on Clinton.

Back in September, I went all out and foolishly bet €1 on a Trump victory at the Paddy Power’s on Wexford Street in Dublin which I documented on IrishCentral.

“[GOP nominee Donald] Trump gave it a hell of a shot going from a rank outsider to the Republican candidate, but the recent flood of revelations have halted his momentum and his chances now look as patchy as his tan,” said Féilim Mac An Iomaire, a Paddy Power spokesman, stated at the time.

“Recent betting trends have shown one-way traffic for Hillary and punters seemed to have called it 100% correct. Despite Trump’s 'Make America Great Again' message appealing to many disillusioned voters, it looks as though America are going to put a woman in the White House.”

Paddy Power has followed this formula before, paying out early on President Obama’s reelection victory in 2012, Tiger Woods’ not winning the PGA Championship in 2009, and falsely calling Manchester United the winner of the English Premier League in 2013.

But there may be a flicker of hope for my lonely €1 bet. “Should Trump upset the odds and become 45th President,” Paddy Power announced, “it will trigger the biggest political payout in bookmaking history and leave Paddy Power with some very expensive pie on its face.”

As for me and my €1 bet? I have the feeling that the system was rigged against me. Possibly Paddy Power were only working off the popular vote?

Dermot McEvoy is the author of the "The 13th Apostle: A Novel of a Dublin Family, Michael Collins, and the Irish Uprising" and "Our Lady of Greenwich Village," now available in paperback from Skyhorse Publishing. He may be reached at dermotmcevoy50@gmail.com. Follow him at www.dermotmcevoy.com. Follow The 13th Apostle on Facebook.