Narrow Water Bridge between north and south Ireland gets funding

The Narrow Water Bridge, the first cross-sea link between the Republic and Northern Ireland, will link Co Louth and Co Down. 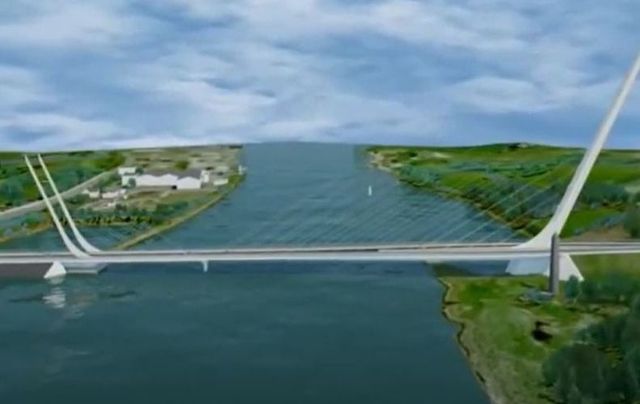 The Narrow Water, a sea inlet in Carlingford Lough, is noted for the deadliest attack by the IRA on the British Army in Northern Ireland when 18 soldiers were killed in 1979.

Now it is likely to be remembered in history as the first cross-sea link between the Republic and Northern Ireland when building starts on a new 280-meter bridge after the Irish government on Tuesday committed €3 million to progress work on the cross-border Narrow Water Bridge project.

Following delays during 50 years when the project was first mooted, construction is now expected to start in 2023.

The cable-stayed bridge, anchored by two towers at either end, will be a huge boost to cross-border tourism and will link Co. Down in the North to Co. Louth in the Republic.

It will connect the A2 Newry/Warrenpoint dual carriageway with the R173 at Omeath and would have the ability to allow for passage of vessels through and on to the Newry Canal.

Taoiseach Micheál Martin said more money from the Shared Island Fund would be allocated once final costs are determined.

Narrow Water Bridge is a true all-island project - an example of the #SharedIsland Fund opening up new and exciting opportunities for the local and wider economy. pic.twitter.com/SIxwE0QdXJ

Previous plans to build the bridge were scrapped in 2013. At the time, Louth County Council said tenders had been significantly above the figures expected to complete the project, ranging from €26 million to €40 million.

Northern Ireland’s Infrastructure Minister Nichola Mallon told the BBC that the Taoiseach’s announcement was “fantastic news” after people in the area had been “let down for far too long.”

Delighted to announce with an Taoiseach @MichealMartinTD & @DarraghOBrienTD funding has been secured from the shared island unit for Narrow Water Bridge - green lighting this iconic project to proceed to the next stages. I will be driving it forward with partners. #Delivery pic.twitter.com/wpUUUzpa3r

Martin said, “The Narrow Water Bridge is a true all-island project, with strong cross-party political support north and south. I welcome the renewed momentum and energy which has been breathed back into this project.”

He added, “The bridge will link the Mourne Mountains and Cooley Peninsula, providing huge tourism and connectivity boosts in the east border region, and will act as a key enabler for improved cross-border active travel and recreation activities including the development of greenways, walking trails and park amenities.”

Mallon said she would work closely with the Irish government and councils in the region “to ensure my department plays its part in delivering this key commitment for communities north and south, enhancing connectivity, encouraging active travel, and opening up opportunities for our island economy.”