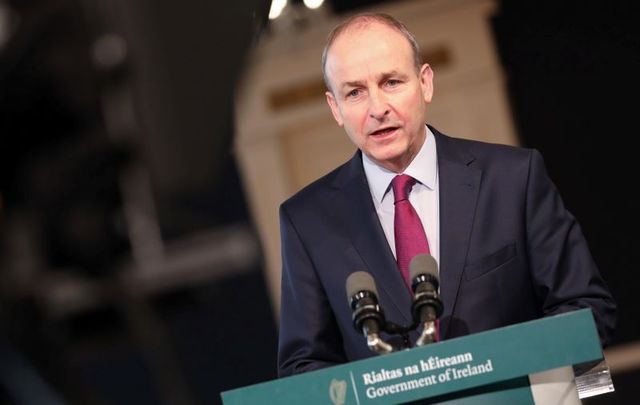 The Taoiseach told the press that a border poll for Irish unification "is not on our agenda" for the Irish government for the next five years.

Early in his address, the Taoiseach noted that the Irish Government is pursuing its goal of building consensus around a shared future, founded on the Good Friday Agreement.

Martin said: "In my discussions with Prime Minister Johnson, we have a shared determination to see our bilateral partnership grow, reflecting the depth of the connections and friendship between our peoples."

He added: "I believe that now is the time to renew our commitment to building that truly shared future. To redouble our efforts to build connections and trust between traditions on our island. To do more together so that in each area of the Agreement, we are making tangible progress on reconciliation."

You can watch the Taoiseach's entire Shared Island Initiative address from October 22 here:

Among the most notable portions of the Taoiseach’s speech on Thursday were his discussions on the Shared Island Fund, which was built into the Irish government’s 2021 budget, as well as the Shared Ireland Dialogue series, which will begin next month.

“This is a game-changing approach to how we invest in support of the Agreement,” the Taoiseach said of the Fund.

Briefly discussing several cross-border infrastructure investments, the Taoiseach said that “we need to enhance connectivity on the island, not only to support the further growth of the all-island economy but also to facilitate and expand our social, cultural, sporting, artistic, and civic connections.”

Education is also earmarked in the Fund, with the Taoiseach making special mention of coordinated investment at the University of Ulster Magee Campus in Derry.

The Fund will also support an all-island research hub, with a focus on moving to a carbon-neutral economy, cybersecurity, food security, as well as next-generation cancer treatment and biomedical devices.

Regarding the upcoming Shared Island Dialogue series, the Taoiseach said the series is meant "to foster constructive and inclusive engagement on all aspects of our shared future."

"Some groups have been traditionally under-represented in the Peace Process," Martin said, "including women, young people and new communities on the island. The Shared Island Dialogue series will actively seek as broad a range of perspective and experience as possible."

He added: “There are 1.3 million young people on this island who have been born since 1998 - their views and actions are fundamental to our shared future. That’s why the first Shared Island Dialogue will be ‘New generations and New voices on the Good Friday Agreement.’”

Concluding, the Taoiseach said: “So, I want to conclude by making the call today to people North and South, and on these neighbouring islands and beyond - everyone with a stake - to bring your energies, ideas, and interests to bear, to building consensus on a shared future on the island underpinned by the Good Friday Agreement.

“The Government is ready to play our part and support this positive, inclusive endeavour on a shared future for this island.”

“We can’t change the past, but we can change the future,” Martin said. “The question for us all is: What future do we want for our children and grandchildren on our shared island?

“It is time to work together to answer that in a way we can all be proud of. I believe we will.”

Speaking with members of the press after his address, the Taoiseach said that a border poll is not on the five-year agenda for the Irish government:

Asked what he can say to give unionists confidence that the Shared Island initiative isn't a way to start talking about a united Ireland, Taoiseach @MichealMartinTD says a border poll is not on the Government's agenda for the next five years | https://t.co/RyQZrgB1Lf pic.twitter.com/4mBHF5fI0V