A look at Lord Mayor of Cork Tomas MacCurtain's passion for Irish music. 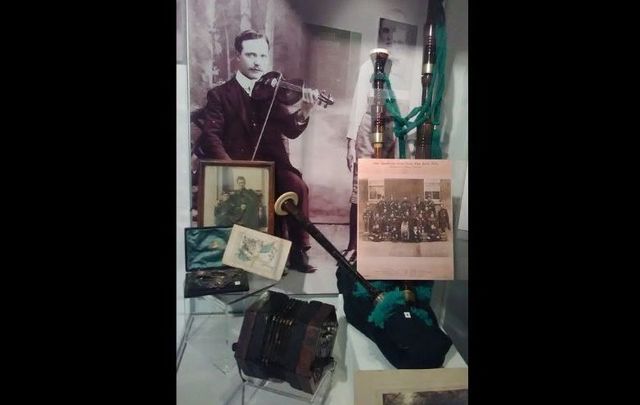 At the Cork Public Museum in Fitzgerald Park, there is an exhibition to mark a tumultuous year in the history of the Rebel City.

"Suffering the Most" commemorates 1920, a year which saw the deaths of two Lord Mayors, a mass hunger strike of IRA prisoners in Cork Gaol, and the burning of the city by British forces. Among the exhibits is one which shines a light on the musical flare of Lord Mayor Tomas MacCurtain.

Lord Mayor MacCurtain was murdered by the RIC in his home on the night of March 20th 1920. He was not only the Sinn Fein Mayor of the city, but also Commandant of the Cork IRA First Brigade. MacCurtain was also an active Gaelic League member and had a great gra for all things Irish, especially traditional music.

MacCurtain played the fiddle and was taught how to play the pipes by Sean Wayland, a Tipperary man living in Cork.

In the early 1900s, MacCurtain became secretary of the Blackpool branch of the Gaelic League and established its string orchestra where he played fiddle. His favourite tune to play was Lark in the Clear Air.

It was through the Gaelic League that MacCurtain met his wife Elizabeth and she too had a love of traditional music. She played the concertina which is also on display in Cork Public Museum.

As Commandant of the Cork Brigade, MacCurtain would travel around the county on his bike inspecting its 21 battalions. MacCurtain would stop at houses of musicians he knew and pick up new tunes. His favourite stopover was at the Golding house in Donoughmore, which was a renowned music house in the area.

In 1914, MacCurtain established the Cork Volunteer Pipe Band. They played at many events and the band, bedecked in an impressive attire of traditional kilts, took part in the funeral procession of O'Donovan Rossa in Dublin in 1915. During the War of Independence, the pipe band led many a funeral procession for IRA Volunteers who fell in action.

MacCurtain had a set of war pipes made with ivory tops and his name engraved on it. Today it makes up the exhibit in Cork Public Museum.

Following the Easter Rising in 1916, MacCurtain was one of many arrested in Cork and sent to Frongoch Prison Camp in Wales. A fiddle was sent to the prisoners by Margaret Bartles, a London lady who was also a suffragette and member of the London Branch of the Gaelic League. MacCurtain wrote to thank her for her generosity and informed her "it has been a great source of pleasure and enjoyment to us, me especially!"

MacCurtain was released in December 1916 but two months later he was arrested again and sent to England but on this occasion instead of prison, he was put into lodgings in the village of Ledbury - effectively put under house arrest!

A local priest became friendly with MacCurtain and sourced him a fiddle to while away the time until he was back on Leeside in June 1917.

Following his murder in 1920, Lord Mayor Tomas MacCurtain's funeral drew thousands to the streets of Cork as his remains made their way to St Finbarr's Cemetery. At the head of the funeral procession was MacCurtain's Cork Volunteer Pipe Band who played a lament for their lost leader.