Michael Collins and Winston Churchill: Could it all have been so different? A unique view

John Deane on his new book, "A Tale of Michael Collins and Winston Churchill: Stepping Stone to a Free Ireland, Vol. 1, Truce," the first installment in his new three-part series. 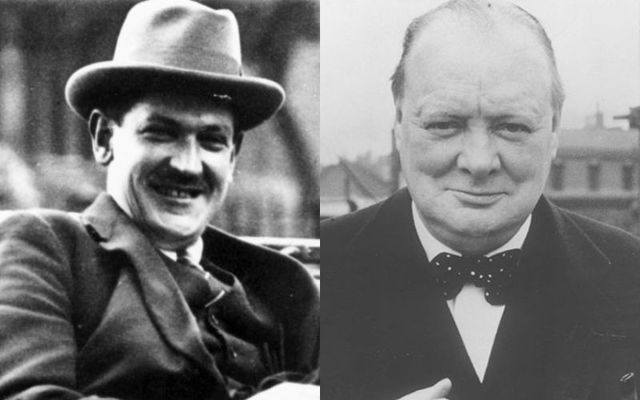 When Michael Collins went with Arthur Griffith to London to negotiate the treaty and constitution that laid the foundation for a new nation, the Irish Free State, 700 years of British domination in Ireland was about to end, in no small measure thanks to the punishing war of attrition inflicted on the occupiers by Collins.

Still, one could wonder what chances this 31-year-old son of a Cork farmer stood against a formidable British team comprised of Prime Minister Lloyd George, Lord Chancellor Birkenhead, and the world-famous Winston Churchill.

At the time, recently appointed Colonial Secretary, Churchill himself later admitted he was but a junior partner on the British team. Still, many people might be surprised to learn of the significant influence he wielded in those negotiations, steering the resulting treaty through Parliament and advocating on behalf of the new Irish Constitution and the Provisional Government headed by Collins.

The genesis of my interest in Irish history and culture lay first with music. On a visit to the Irish Arts Center in New York City's Hell’s Kitchen, a dicey venture in 1972, I saw a poster for one of the first US tours by The Chieftains and decided to go. Sitting near the front of the balcony at the New Abbey Theatre on East 13th Street, I was transfixed.

The music struck my heart and awoke a love of my Irish heritage I had never before experienced. Soon after, I joined a band being formed to play British and Irish music, and before long, we were performing regularly at the Bells of Hell, coincidentally across town on West 13th, and sitting in on ceilidhs around town.

One career change later, while making my living as a photographer, I gave my father the William Manchester biography of Winston Churchill, which after reading he gifted back, advising, “You’ll want to read about his dealings with Michael Collins.” This was my introduction to both Churchill and Collins, but, like many Churchill biographers, Manchester would have us believe that “Churchillian charm” had won over the trust and friendship of Collins.

I was warned off this simplistic concept when I had the distinct pleasure of having dinner in Dublin with Tim Pat Coogan, the author of the immensely entertaining and definitive biography of Collins. By this time, I had started writing a story about Collins and Churchill, and Tim Pat was enormously inspiring and encouraging.

From the start, I was struck by the contrasting experiences of my two protagonists and their associates, sometimes occurring on the same day. On New Year’s Eve 1920, while Churchill was drinking champagne and singing “Auld Lang’s Syne” at a seaside estate on the coast of Kent, Collins's friend and collaborator, Eileen McGrane, was rudely assaulted and arrested at her home in Dublin by British police. This dichotomy became a central theme, presenting a story without idealising either side but from two distinct perspectives—one Irish, one British—told honestly and accurately.

Above all else, I set out to entertain, infusing my tale with as much humor as possible while leaving out any sentimentality.

By following the day-to-day lives of our two remarkable adversaries, we learn how despite their decidedly unequal upbringings, they both adhered firmly to ties with family, friends, and loved ones who instructed their personalities, mores, and political decisions.

We hear from them mainly in their own words, sometimes imagined, but always drawn on research into biographies, newspaper accounts, records of official meetings, and personal letters. Throughout life, many people weave in and out of our daily routines, and public figures like Churchill and Collins interacted with more than most.

I have striven to do each of the many characters justice, presenting them as meaningful persons integral to the story, even if in some cases for only brief cameos. Some fictional characters come and go, but their presence is meant to provide a sense of cohesion across the many dramatic events that unfold here.

Early in the story, readers have a chance to share my love of Irish music at a ceilidh, not unlike the ones I attended. We laugh as Collins and Billy Conlon dance to one of my favorite pieces by The Chieftains, “O’Carolan’s Concerto,” before Collins is safely whisked away ahead of an invading horde of police, the Tans, by his friend Eileen McGrane. Sadly for Michael, she ended up opposing the treaty he brought home.

People still debate whether Collins and Arthur Griffith could have negotiated better terms with Churchill and Lloyd George, whether they could have brought back a united Ireland or avoided the ensuing Civil War. My story hopefully presents the unbiased facts and fairly represents the arguments from both sides and both perspectives. I don’t claim to be entirely impartial, but I will let the reader draw his own conclusions as to whether history could have, or should have, been any different.

"A Tale of Michael Collins and Winston Churchill: Stepping Stone to a Free Ireland, Vol. 1, Truce"  is available on Amazon.