All the whitewash in the world will never remove the stain of the British government-ordered murder of Belfast civil rights lawyer Pat Finucane in February 1989. 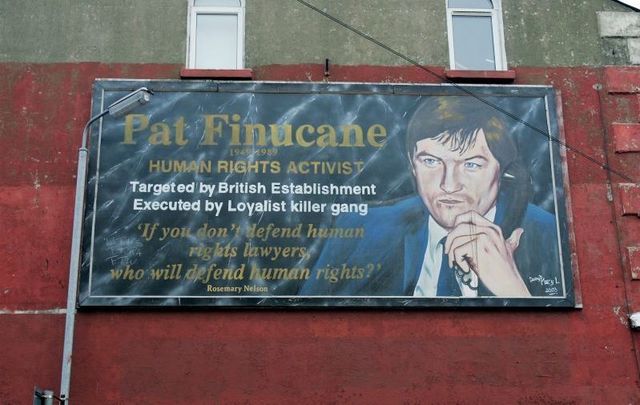 Human rights lawyer Pat Finucane was shot 14 times and killed in front of his wife and young children in his Belfast home in February 1989. RollingNews.ie

The latest setback for the Finucane family, and all those demanding justice, came this week when the British secretary of state for Northern Ireland revealed there would be no public inquiry and that the matter would be left in the hands of local police.

Local police? The British Supreme Court had envisaged a public inquiry which would  involve an investigation of the entire  apparatus of the British security operations in Ireland.

The inquiry should have addressed how Finucane was a dead man walking after he was named as a terrorist for doing his job as a defense lawyer by a minister in the Margaret Thatcher government under parliamentary privilege.

The overwhelming question to be answered is what was Thatcher's role?  Did she personally order the murder of Finucane and, if so, how far did the cover-up go?

Instead the issue, we were told this week, would continue to be under the auspices of PC Plod and the local lads who have no inkling or new insight on the case whatsoever.

Brandon Lewis, the Northern Ireland minister, used plain Orwellian speech to explain why the inquiry will not happen, ending by saying things were not too bad old chaps. After all there was this:  “We remain committed to working collaboratively with the Irish government, the Northern Ireland parties, and civic society, including victims’ groups, in finding and delivering a progressive way forward on legacy to support Northern Ireland in working towards a more positive future.”

In other words, we will continue to investigate ourselves and report back what we find.

Finucane’s wife Geraldine was scathing. “In failing to establish a public inquiry into the murder of Pat Finucane, the British government have not only set themselves against my family but also the Irish government, local, national and international political parties, political institutions, legal and human rights groups domestically and internationally,” she said.

The killing was sanctioned and carried out by the British state. Of all the crimes committed in Northern Ireland, the Finucane murder is the one which successive British governments, of whatever hue, have most resisted investigating.

Finucane’s problem was that he was too good at his job of defending Irish men and women arrested for alleged crimes against the state.  He had to be gotten rid of.
The leader of the gang that killed him was a British special branch agent named Tommy Lyttle. The man who confessed to being the Ulster Defense Association (UDA) hitman was Ken Barrett, also a special branch agent.

The UDA man who supplied the gun was William Stobie, also a special branch agent. He was killed by a British agent in 2001 when he threatened to tell the truth about what happened to Finucane.

Finucane’s death was vicious. A detective who surveyed the crime scene had never seen a murder like it.

The gunmen had downed Finucane with shots to the chest before standing over him and shooting him in the face. “His face was heavily covered in powder burns, which indicated that he had been shot several times at a range not greater than 15 inches. Finucane’s three young children (and wife) had been watching,” he said.
Thatcher might as well have been in the room when the gun went off 14 times.

The British government has made its preference known. They will cover up to the bitter end.

But all the whitewash in the world will never remove the truth about what happened to Pat Finucane.