Panic is too mild a word to describe the aftermath of a poll predicting that Labour would win no seats in the next general election. Long knives were quickly drawn and a vendetta against party leader Alan Kelly began. 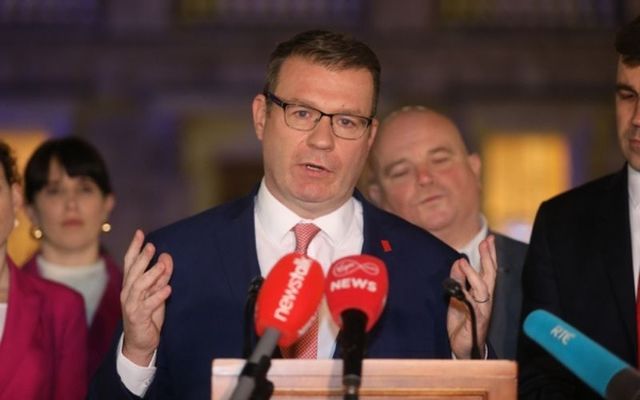 A complete wipeout of every sitting Labour Party TD, as predicted in a private poll, has led to panic stations in the ranks of the party, Ireland’s oldest.  First to be thrown overboard was current leader Alan Kelly, sacrificed to the political gods just days after the secret poll.

Panic is too mild a word to describe the poll aftermath. Long knives were quickly drawn and a vendetta against Kelly began.

Not so long ago the Irish Labour Party believed that they were on the cusp of having their leader Eamon Gilmore elected as taoiseach.  At 24 per cent in the opinion polls in 2011, two weeks before a general election, party workers began erecting “Gilmore for Taoiseach” posters all around the country.

But it wasn’t to be, and by the time election day came around their vote had slipped to 19 percent, winning 37 seats. Enough to see them in government, but not at the head of the table.

The party wrestled with its conscience as to whether they should participate in a Fine Gael-led administration. Their conscience lost and they took their Cabinet seats, a decision they surely now rue.

The rest is history as they plummeted in the opinion polls, popularity and seats won. They are now in disarray languishing at four percent, with seven TDs and Kelly forced to resign last week.

Kelly was elected to the position just under two years ago, and while he has tried hard he never managed to move the dial on Labour support.  The brother of Declan Kelly, the Irish American business executive and former CEO of Teneo, Alan’s style has always been brash and aggressive, priding himself on his nickname AK47.

While in government during the banking crisis Kelly took no prisoners and made no friends.  Among the enduringly unpopular decisions he took was to abolish local town councils and implement a household water charge, the latter reversed after public opposition.

Other hostages to fortune that Kelly created were a quote he gave to the Irish Independent back in 2016 which has been widely used against him. “Power,” he said, “is a drug and it suits me.”

Kelly was also heavily criticized for his friendship with the disgraced Football Association of Ireland (FAI) boss John Delaney who canvassed for him in his Tipperary constituency.

What brought dissatisfaction with Kelly to a head was an internal report last week which apparently showed every one of the party’s nationally elected representatives at risk of losing their seats in the next general election.  Without much reflection they stuck the knife into Kelly’s back, metaphorically speaking, and pushed him out. The Ides of March coming early for him.

He joins the list of three of his immediate predecessors, all rejected by a parliamentary party that values survival over loyalty.  But is their analysis correct? The problem with the party goes much deeper than that of the leader, and the solution will require more than a change in personnel.

Kelly was unlucky in that his leadership coincided with the lockdown which severely restricted his ability to set the political agenda of the day, or indeed to hold public meetings or campaign events.

A major part of the problem is that the Labour Party has allowed itself to be surrounded by opponents that are only too happy to keep them in their current position.  On the liberal left are the Social Democrats while on the hard left are People Before Profit, both parties stealing part of their clothes.

But the real challenge is Sinn Fein, which has cannibalized Labour’s working-class support and supplanted them as the party of choice for the disaffected.  While Labour over the past few years has obsessed on issues such as which pronouns can be made illegal and how religion can be blamed for every ill under the sun, Sinn Fein has put in the hard yards, espousing populism as a strategy and concentrating not on those who describe themselves as “of the left” but on those that feel “left behind.”

However, those who write off Labour do so at their peril. Formed in 1912 as essentially a trade union party, it is the oldest party in the country with an unbroken history.

It has been the junior party in government on a number of occasions but has always been battered and bruised by the experience. So much so that has been characterized as the “mudguard” for the larger parties that it served with.

Yet there is an enduring respect for Labour which was evident in the bye-election last year when their candidate Ivana Bacik beat off the stronger Fine Gael candidate to win the seat. And of course, Irish President Michael D. Higgins was the nominee of the party for his current position.

Both elections, though, were decided by the personality of their candidates rather than policy considerations, and in the case of Bacik, Kelly was the leader which suggests that he is not the overriding problem.

So where will the party turn now for its new leader?  The overwhelming favorite is Bacik.

Her paternal grandfather left Prague when the Communists took over following World War II, and he was instrumental in setting up Waterford Glass. Her father was an astronomer.

Bacik, despite her recent success, has not always been a vote-getter and has a history of unsuccessful electoral attempts. She was also embroiled in the recent storm surrounding former minister Katherine Zappone and had to apologize for attending a controversial party held by Zappone in Dublin’s Merrion Hotel during lockdown.  She has steadfastly refused to identify any of the other attendees at that event, and her attendance made it impossible for Kelly to make political capital out of that fiasco.

For all of that, Bacik is extremely popular within the party.  The question, though, is what direction she would take them.

It would be churlish not to wish her the best of good fortune on the uphill journey that she and the Labour Party now face. Her success, however, will not be determined in the leafy suburbs of south Dublin where she is clearly at ease, but rather in the council estates and apartment blocks in urban Ireland, among those who are economically struggling.

To paraphrase the words of Pulp from their classic song “Common People,” she will have to live like common people and see whatever common people see.  Expect to see her photographed at a supermarket real soon.