It has been a dreadful few months for the largest political party in the North which has laid bare a series of infighting and own goals. 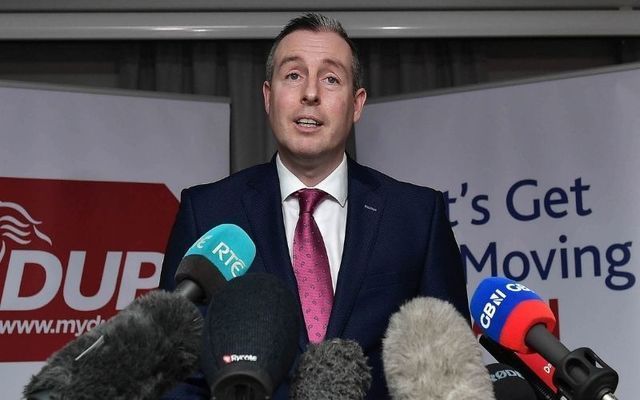 The decision by the Democratic Unionist Party (DUP) to pull the plug on the Stormont Executive was timed to create maximum exposure and media hype and fire the first public shot in the Northern Ireland Assembly elections due in May.

Instead, it fell flat on its face as the resignations of U.K. Prime Minister Boris Johnson’s top aides on the same day sucked any media oxygen from their actions and left the party trying to justify its behavior to an exhausted public in the six counties.

It has been a dreadful few months for the largest political party in the North which has laid bare a series of infighting and own goals.  It is perhaps best exemplified by the antics and saga of former leader Edwin Poots.

In April of last year, he led a putsch against the then DUP leader Arlene Foster. Having wielded the sword Poots decided not to take the crown, that dubious honor falling to his close confidante Paul Givan.

However, he had to do a deal with Sinn Fein against the express wishes of DUP Assembly colleagues who promptly ousted Poots. A leader for all of 21 days.

Not easily discouraged, Poots has since been rejected as a candidate by his own party members in his chosen constituency and had a decision to stop inspections of goods coming into Northern Ireland ports overturned by a judge in Belfast.

Embarrassment piled on humiliation on top of rejection, Poots has had it all, blundering from one crisis to another, just like his party. As one critic pointed, out the D in DUP possibly stands for disarray.

The strategy behind the resignation of First Minister Givan is pretty transparent but the timing is questionable. While the ostensive reason is the DUP’s unhappiness with the Northern Ireland Brexit Protocol that controls trade between the North and the rest of Britain, the real prize is to be returned as the majority party in the upcoming elections.

The DUP electorally are in a dangerous place.  Their support has dropped from 28 percent in the last Assembly election to around 18 percent as measured in a recent opinion poll. However, such polls need to be taken with a large grain of salt given the polarization of opinions in the North.

Nonetheless, it is not a place that the party wants to be in, and by collapsing the effective running of the Executive they hope to be center stage in the campaign with the Protocol as their chosen issue.

However, this tactic is not without risk considering that their greatest ally in Westminster, Johnston, has previously let them down and is himself in danger of making an ignominious exit from 10 Downing Street.

While spooking their electorate is a tactic the DUP has successfully used in the past, it was always predicted on a sympathetic British government.  Given their own troubles, there is no guarantee that the British will play ball this time.

Indeed they should recall the advice given to all unionists by Edward Carson, the founding father of modern-day unionism and the architect of partition who once said, “What a fool I was. I was only a puppet, and so was Ulster, and so was Ireland, in the political game that was to get the Conservative Party into power.”

In relation to the timing of the move, it comes after the North had decided to come out of lockdown, but immediate doubt has now been cast on the authority of the remaining members of the Executive to execute this decision, with the possibility of full removal of restrictions depending not on political decisions but on judicial approval.

The British Medical Association (BMA) has also condemned the resignation, pointing out that it has spent two years fighting Covid and was on the cusp of meaningful investment in the North’s health services. They have been fighting for a multi-annual budget to reverse shortages, and having been promised a three-year budget they now face the disappointment of that been withdrawn.

The wind, the BMA stated, has been taken out of their sails and left the medical profession demoralized.  The DUP action has also led to broader criticism that they are more interested in importing sausages from England than in the mental health and cancer care of its own citizens.

There is also the problem of a public apology to victims of historical institutional abuse which was promised by the first minister and deputy first minister for March.  This promise was on foot of an inquiry that investigated 22 institutions in Northern Ireland, the circumstances surrounding the sending of child migrants from Northern Ireland to Australia, and the activities of the late pedophile priest Brendan Smyth.  One of the main findings from the final report was the victims should receive a public apology and an acknowledgment of the wrongs that had been inflicted on them.

Amid claims that the collapse of Stormont was playing politics with the lives of victims, the commissioner for Survivors of Institutional Childhood Abuse, Fiona Ryan, said Givan's resignation "couldn’t come at a worse time for victims and survivors of institutional childhood abuse.”  She said if an apology does not go ahead "it will absolutely cause further trauma to many victims and survivors.”

So, who are the DUP most afraid of, and if their vote hemorrhages where is it likely to go?   Their traditional opponents within unionism are the Ulster Unionist Party (UUP). However, that party is on its own trajectory, tacking to the center ground and away from hardline unionism.

The UUP rebranding under leader Doug Beattie hit a stormy patch recently with his Neanderthal tweets from over a decade ago concerning women and “Johnny foreigner” seeing the light of day.  Clearly, someone had conducted opposition research on Beattie, but releasing the tweets so far in advance of the election has given him the opportunity to put it all behind him.  Now which party could be that incompetent?

Beattie for his part has come out, apologized, and admitted that he was wrong. In recent weeks he has stated the Bloody Sunday massacres in Derry were unjustified and called on people to “stand up and say what happened on that day was wrong.”

In taking this stand he will have alienated the hardliners but at the same time moved closer to the position of the centrist Alliance Party. They sent their deputy leader to Derry to lay a wreath at the 50th-anniversary commemoration of the Bloody Sunday killings, and party leader Naomi Long has been impressing observers with her strong media performances.

Why all this is important is that for the Assembly elections the North uses proportional representation, where if a candidate is eliminated their second preference votes will count.  If the middle-of-the-road unionist transfers their votes between the UUP and Alliance then the DUP will have an extremely difficult task to return as the main party.

In that scenario, Sir Jeffrey Donaldson, who is contesting the Assembly elections to become First Minister, may have to play second fiddle to Sinn Fein. Now that would be a bitter pill to swallow.