On This Day: Irish satirist Jonathan Swift born in Dublin in 1667

Author of the famous "Gulliver’s Travels", Jonathan Swift is remembered as one of Ireland's best satirists. 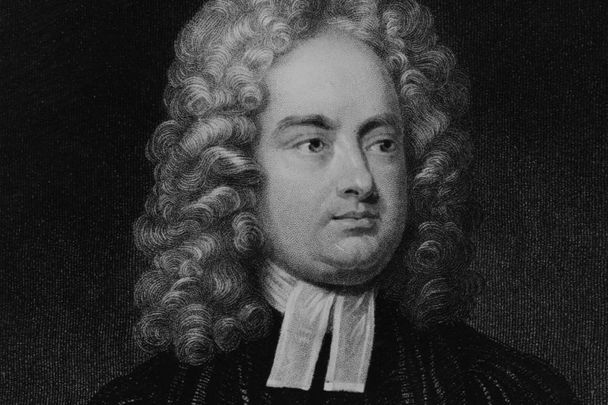 A portrait of Jonathan Swift circa 1719. Getty Images

Jonathan Swift, the Irish writer behind "Gulliver's Travels," was born in Dublin on November 30, 1667. Here is a look at his life.

It just so happens that I live around 10 miles from a place called Lilliput. This brings to mind a fantasy of four parts regarding one Lemuel Gulliver, written by perhaps the greatest Irish writer of them all, published in 1726. "Gulliver’s Travels" is the most famous work of Jonathan Swift (1667-1745) and is a satire on both human nature and the "traveler’s tales" that were then in vogue.

Born in Dublin on 30 November 1667, Swift was the son of English parents. His father, a lawyer, died before Jonathan’s birth and his childhood was partly spent in the care of a nurse, his paternal uncles, and, most likely, in the absence of both parents. Some parts of his life appeared like satire, which is entirely appropriate for a man who became a leading satirist himself, forever poking fun with the tools of irony, humor, exaggeration, and ridicule. Swift admitted himself that he’d written his most famous work to "vex the world", which it probably did.

Swift started his education at Kilkenny Grammar before entering what was then Ireland’s only university, Trinity College Dublin, continuing his studies in Latin and Greek and adding Hebrew, and deepening his knowledge of Aristotelian philosophy.

After four years, he graduated with the degree of BA ex speciali gratia - a term that Swift later glossed to imply that he had been a poor student, but which most likely did not have the negative connotations Swift would later mischievously suggest. It is certain, though, that Swift was not an outstanding undergraduate, and having left Trinity College in 1686 he was perplexed as to a choice of career. Despite the help of his uncles, Swift had no easy entry into a profession such as would enable him to retain the status of gentleman, so important in his age.

Following the Glorious Revolution of 1688, when the Protestants William and Mary took the throne off the Catholic-leaning James II, and the subsequent disorder in Ireland, Swift headed for England and relative safety.

Family connections assisted him in starting a career as secretary to the esteemed diplomat and essayist Sir William Temple, who was resident in Farnham, Surrey. Now aged 22, Swift quickly set about acquainting himself with the big, wide world and it was here that he first met Esther Johnson, then aged just eight years old. Johnson was the daughter of Temple’s housekeeper and went on to become a mix of pupil, friend, and possible lover to Swift.

While sources vary over the status of their relationship, Esther was eventually immortalized in verse tributes, most notably "Journal to Stella," and was undoubtedly important to Swift. Debates about the nature of their relationship continue to rage with some scholars believing the two were secretly married as early as 1716 and others denying all possibility of a romantic relationship between the two.

In 1694, Swift switched careers and trained to become a protestant clergyman, serving in parishes in Carrickfergus, Co Antrim. After Temple’s death, Swift was given the vicarage of Laracor, a town in Co Meath. Swift hoped to eventually rise through the ranks of the church to become a bishop or even an archbishop. However, his outspoken nature had earned him enemies which stunted promotion. The scandal over his private life did him no favors either when during a 1708 visit to London he first met Esther Vanhomrigh. This second Esther was seven years younger than Esther Johnson and after returning with him to Ireland became Swift’s lover and correspondent for over ten years. She was eventually cast aside for Johnson and went on to die a broken-hearted woman later that same year. Despite the scandal, Swift did indeed climb the ranks and in 1713 he was appointed Dean of Saint Patrick’s Cathedral.

In 1704, the publication of his satires "Battle of the Books" and "A Tale of a Tub" saw Swift back his late patron in the quarrel between Ancients and Modern. The quarrel was a fervent literary dispute raging in both England and France as to whether classical literature (ancient Greece and Rome) was impeccable or whether it could be challenged by modern works. The debate had been started by Temple years before after he argued against the modern position in his essay "On Ancient and Modern Learning" and was subsequently picked up by Swift and his circle of writer friends, often called the Scriblerus Club.

Swift’s visits to London were mostly political but he also took advantage of the opportunities afforded to him through travel and explored many friendships, both literary and noble. Swift supported the Whigs (today’s Liberals) initially but switched to the Tories because of his loyalty to the English Church.

His friendship with Robert Harley was pivotal in this switch, which was confirmed in 1710 when Harley returned to power, firstly as Chancellor of the Exchequer and then as Lord High Treasurer. Swift was recruited as Editor of The Examiner, the official mouthpiece of the Tories.

Swift’s "Four Last Years of the Queen" set out the intrigue and campaigning of that period. At the time, the Tories wanted to keep the establishment secure and bring war with France to an end and so Swift’s "On the Conduct of the Allies" supported this aim, whilst also lambasting the Whigs.

The death of Queen Anne, in 1714, disappointed Swift and the members of the Scriblerus Club, presumably because they’d lost patronage and favor. Swift returned to the Deanery of St Patrick’s Cathedral, in Dublin, and largely remained there until his death, where he fought strongly for Irish liberties, which were being denied by the then Whig government. Swift’s "The Drapier's Letters" formed the most famous part of this pro-Irish activity. Swift focused on the English government’s restrictions on Irish trade, e.g. in respect of wool and cattle. His vigorous campaigning on Irish issues, plus his charitable efforts for the poor of Dublin, revived his reputation and he became something of a modern-day celebrity.

It was during his 1726 visit to London that Swift published "Gulliver’s Travels," his best and most famous satirical work which is split over four parts. The book was an immediate success and has remained so ever since. Although published in London, much of the book was written at Woodbrook House in Co Laois.

Completing "Gulliver’s Travels" seemed to release Swift’s energies for the light verse that followed, having previously only employed this particular talent for the amusement of the ladies. Poetry of this genre included "The Grand Question Debated" (1729) and "Verses on His Own Death. "Swift particularly liked "On Poetry; a Rhapsody," which he rated his best verse satire.

Swift died on 19 October 1745, aged 77. He was buried at St Patrick’s Cathedral in Dublin, where he’s oft referred to as "Dean Swift" due to his having been Dean between 1713 and his death.

Related: Ireland of the Welcomes, Books