Support for Sinn Féin is soaring, according to a recent Irish Times poll, potentially paving the way for Mary Lou McDonald to become Taoiseach. 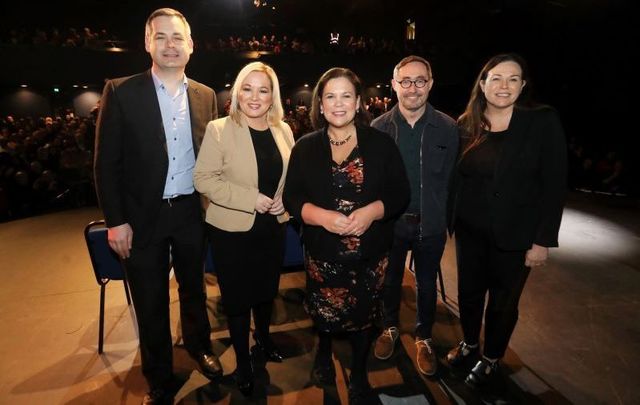 The three parties that form the present Irish government (now one year in office) just can't catch a break it seems. Everything that could go wrong for them is going wrong.

And even though it's not always their fault, Fianna Fáil, Fine Gael, and the Greens are paying the price for being in power at a very difficult time.

The recent Irish Times national opinion poll showed them struggling to win approval from voters while Sinn Féin support continues to soar. The party is not only on track to lead the next coalition government here with Mary Lou McDonald as Taoiseach, it could even get an overall majority if the trend continues.

One indicator will be the by-election in two weeks in Dublin Bay South, a Fine Gael heartland that is one of the most affluent constituencies in the country. If Sinn Féin manages to pull that off then the writing will be on the wall for both Fine Gael and Fianna Fáil, the two big parties that have dominated Irish politics for decades.

That may be too big an ask for Sinn Féin at this stage despite their soaring support.  But it's not impossible given some of the revelations in the Irish Times poll which put support for Sinn Féin at 31 percent, Fine Gael at 27, and Fianna Fáil at 20. That national picture is unlikely to be replicated in Dublin Bay South, but there are worrying aspects in the detail of the poll.

That detail shows that, as usual, Sinn Féin support is strongest among young voters and working-class voters. But it also shows that Sinn Féin has increased its level of support among older, better off voters.

It means that Sinn Féin is becoming a mainstream party and is attracting support from a still small but growing number of older middle-class voters across the country for whom voting for the "political wing of the IRA" used to be unthinkable.

These are people who, unlike younger voters, remember The Troubles and know the record of Sinn Féin on justifying violence. But they are now willing to vote for Sinn Féin because they are so disappointed and frustrated by the performance of Fianna Fáil and Fine Gael in government.

The biggest cause of this frustration is the housing crisis, with little sign of improvement and most experts predicting that it will take years to sort out. It seems fitting that the by-election in Dublin Bay South was precipitated by the departure from politics of the last minister for housing, Eoghan Murphy of Fine Gael. His successor, Darragh O'Brien of Fianna Fáil, is now struggling with the poisoned chalice.

One of the initiatives that Murphy had promoted was allowing developers to bypass local councils when seeking permission and go straight to the National Planning Board. This was done to get around objections to developments from local people and their politicians who are all in favor of new housing -- as long as it was not in their areas.

Now the courts have stepped in to stop or hold up these so-called strategic developments and the system is grinding to a halt. Plans for thousands of new apartments and houses are on hold as a result.

In the past few weeks, another housing problem has emerged. This was caused by the defective concrete blocks that were used to build thousands of homes in Donegal and some other parts of the country over the past decade. These houses now have to be rebuilt and the cost to the state will be enormous, eating into the funds that should be spent on building new homes.

Added to all that are the recent revelations about how global investment funds have been buying up developments here to put on the rental market, shutting out individual buyers.

This is an issue that angers people even in affluent areas like Dublin Bay South where the bank of Mom and Dad used to enable young couples to get a foot on the property ladder. The upward pressure is now so great that homes are approaching pre-crash price levels, and even these fortunate young couples are being forced into long-term renting.

All of this is manna from heaven for Sinn Féin, which heaps the blame on the government and says that when they get into power they will build enough homes for everyone. The cost and whether the state can afford it are brushed aside.

They also ignore the shortage of construction workers, many of whom emigrated and are not coming back, and the rapidly increasing cost of building materials. But then Sinn Féin never lets reality spoil their populist promising.

As we said, it seems the government cannot get a break, especially when it comes to housing. And the housing issue is not the only one, with previous major areas of dissatisfaction (hospitals, schools, the cost of living, etc.) once again reappearing and hollowing out support for the government.

Added to that is the failure so far for the government to get much of a bounce for its handling of Covid and the vaccine rollout. Even though the general assessment is that we did reasonably well in dealing with the pandemic, that is being taken for granted by voters.  Already their minds are shifting to other problems and areas of dissatisfaction, all of which require vast amounts of money to fix, money we don't have.

Apart from the enormous cost of the Covid supports, some of the unforeseen issues mentioned above are going to cost the state billions. The defective concrete blocks (weakened by mica or pyrite) will cost a billion or two, for example. The redress scheme for former inmates of Mother and Baby Homes will cost the same.

Then there is the post-Covid recovery plan for the economy and the plan for a massive social and affordable housing program, each of which will cost several billion. And that's before we add in the cost of climate change measures and all the environmental spending that the Green Party wants now that it is in government.

Any hope of restoring some fiscal balance in the immediate future seems to be gone. It's spend, spend, spend, which is not a great idea when the global corporate tax changes that are coming are going to hit our revenue hard and the effects of Brexit on our economy are just starting to emerge.

Despite this, the government appears to have thrown caution to the wind when it comes to spending, a bit like President Biden. Whether it will pay off in the long term here is far from clear, just like in the U.S.

With its weak support among voters and the continuing rise in support for Sinn Féin, the pressure on the government is starting to tell.  Under the sharing deal with Fianna Fáil Leo Varadkar will be back as Taoiseach at the end of next year and the government still has over three years to run before it must face a general election. But the nerves are showing even though there is just about enough time to recover.

That was evident in some of the stuff Varadkar came out with in his address to the Fine Gael ard fheis, held virtually last week. He wants the housing target to be pushed up to 40,000 new units a year. And he thinks income taxes are too high and need to go down, not up.

Even allowing for the upcoming by-election which Fine Gael needs to win and his tendency to upstage Fianna Fáil every chance he gets, this was almost as irresponsible as the stuff we hear from Sinn Féin.

Also in this category was Varadkar's assertion last week that he expects there will be Irish unity in his lifetime. Since he's relatively young that is not unreasonable, although it's far from certain.

But given what is going in the North right now, the timing was terrible. If ever there was a time for politicians in the south to stay quiet this was it.

Maybe Varadkar is incapable of keeping his mouth shut. Or more likely he did it deliberately to shore up support among any Fine Gael voters in Dublin Bay South who might think Sinn Féin are the only ones with dreams of a united Ireland.

In contrast with this, the Fianna Fáil leader and Taoiseach Micheál Martin has been a model of restraint and good sense. That was reflected in the Irish Times poll which showed that his satisfaction rating was up seven points to 49 percent.  This was in contrast with the satisfaction rating for Mary Lou McDonald who, despite Sinn Féin doing so well, was down three points to 42 percent. Maybe people are tiring of her endless negativity.

The poll is considered to be the gold standard among national opinion polls here so it's worth paying attention to what it reveals. The details can be found online on the Irish Times website.

It must have made grim reading for the government parties. But time is still on their side.