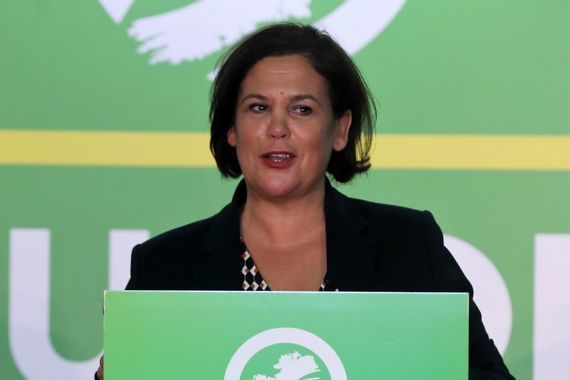 Sinn Féin has surged into a 10-point lead over its nearest rivals Fine Gael, according to a recent Sunday Times opinion poll.

The Behaviour and Attitudes poll for the Sunday Times found that support for Sinn Féin has jumped to 34% - a four-point jump since May - while support for Fine Gael has dropped four points to 24%.

The poll was conducted between May 27 and June 8 on a sample of 909 registered voters. The poll's margin of error was plus or minus 3.3%.

The poll was conducted shortly after the government parties faced criticism for not increasing stamp duties for investment funds bulk-buying apartment buildings.

The Government passed a proposal to increase stamp duties by 10% for investment funds buying houses to combat Ireland's rising house and rent prices, but Minister for Finance Paschal Donohoe argued that there was a significant risk that developers would pull out of the apartment market if similar levies were introduced.

Housing prices are currently growing at a rate of 3.7% - the fastest rate of growth in over two years - while average rent in Dublin has now soared to more than €2,000 per month. Nationally, the average monthly rent stands at €1,443, fueling widespread voter dissatisfaction.

A recent Journal.ie poll found that 36% of Irish people trust Sinn Féin to deliver on housing, compared to just 17.8% for Fine Gael and 14.5% for Fianna Fáil.

Sinn Féin's support is particularly strong among young people, with 44% of voters aged between 18 and 34 now supporting the party, according to the Sunday Times opinion poll.

News of the opinion poll comes just weeks before the expected polling day in the Dublin Bay South by-election.

Sinn Féin has selected former Dublin MEP Lynn Boylan to contest the by-election and the Sinn Féin candidate is seen as a strong contender, despite running in a middle-class constituency that is viewed as "not natural" Sinn Féin territory.

Victory for Sinn Féin would see them draw level with Fianna Fáil as the largest party in the current Dáil.