The Irish origins of the Christmas tree 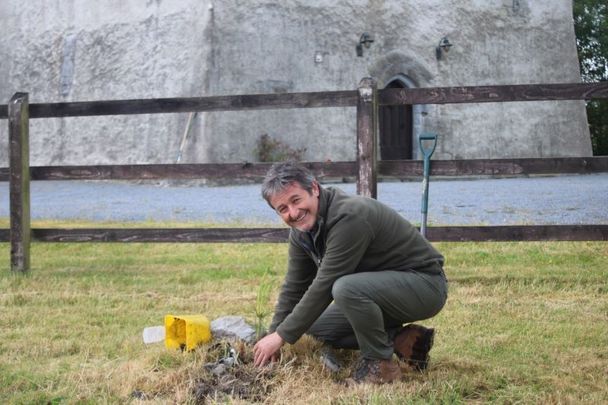 Prince Albert, German consort of Queen Victoria is widely credited with introducing the Christmas tree into the homes of wealthy and middle class Victorians however the tradition of bringing greenery into the home was already an ancient tradition in Ireland.

The Irish have been celebrating midwinter, or Mean Geimhreadh, for millennia culminating in the Solstice on the 21st December when the sun returns bringing light, nurture, and hope.

Our modern Christmas is the most recent incarnation of this ancient tradition evolving from a bewildering amalgam of Roman, Celtic, Ancient European, Christian, Victorian and American traditions.

The Scots Pine, Pinus Sylvestris, was revered by the Druids associating the evergreen with the return of the Sun after the dark short days of Winter. Yule logs a precursor of the Christmas tree would most likely have been Scots pine and would have been ceremoniously kindled whilst its branches along with other evergreens Holly and Ivy were used to decorate homes, adding colour to an otherwise bleak time of year.

Until recently, the Scots pine was believed to have died out in Ireland between 2000 to 1000 years ago. Virtually all of the Scots pine in Ireland were reintroduced about 150 years ago from Scotland,  but thanks to the research and the intrepid effort of some Trinity College Botanists led by Professor Fraser Mitchell and following extensive scientific analysis, it was conclusively verified that a stand of  Scots pine located at Rock forest in county Clare was truly indigenous!

“All of these trees found in Ireland today were assumed to be descendants of the introduced Scottish stock, but that’s not the case. We analysed pollen grains preserved in lake sediments to look into the natural history of this species, and those grains revealed its continual presence over the years at a location in east Clare.” Professor Fraser Mitchell.

The ancient Irish had a great respect for nature, especially for trees. The Druids recognised five great trees, known as The Guardians of the Five Provinces, as highly sacred entities. The trees, three Ashes an Oak and a Yew, were located at Meath, Kildare, Carlow, and Mide (central Meath) and represented the cardinal points of the five provinces, with The Hill of Tara in Mide at its centre.

The Druids were remarkable individuals; polymaths, trained as philosophers, teachers, healers, and judges who were guardians of the Brehon law, the Irish native legal code.

In early medieval Ireland, Brehon law - the Bretha Comaithchesa, translating as ‘judgement of the neighbourhood’ - listed, in terms of economic importance, twenty-eight trees and shrubs, divided into groups of seven with the most important being, in the Brehon pantheon of Druidic law, the so-called Lords of the woods; airig fedo Oak, Hazel, Yew, Holly, Ash, Wild apple and Scots pine. The law regulated compensation for any damage inflicted, levying a commensurate amount against each grouping.

Scots pine was amongst the most valuable and versatile of Irish trees possessing a multitude of uses: pine resin was tapped and used for wood preservation and pitching for boats, or mixed with charcoal to form an excellent glue which was used in weapons manufacture; in particular the binding of arrowheads. The needles contain relatively high levels of vitamin C which can be made into a tea whilst the nuts were a welcome mid-winter food and in times of famine the highly nutritious, mineral-rich, inner bark could be harvested and made into a fibrous porridge.

This remarkable versatility may have contributed to its demise and consequently to the decimation of the Red Squirrel population that existed in symbiotic harmony in the ancient forests.

This keystone species is now being cultivated and is commercially available from Mountshannon  Arboretum in County Clare. Planting of indigenous Scots pine has commenced at Turin castle in County Mayo and plans to extend the programme to other landmark sites including Westport House is currently under discussion.