This Love a Tree Day celebrate your Irish roots by starting your own Irish history with the Irish Heritage Tree program. 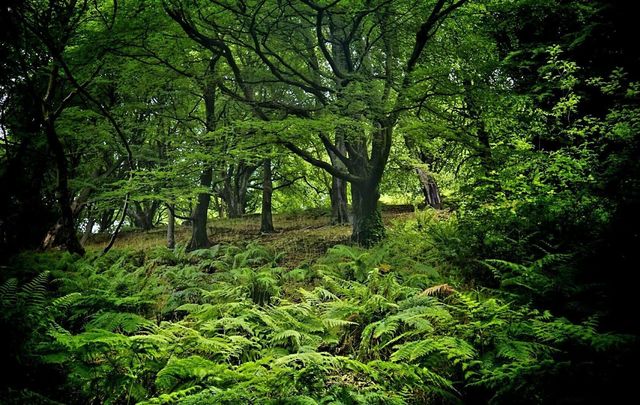 The incredible trees of Ireland! Plant your roots with Irish Heritage Tree. Getty

From the "Hungry tree" that is eating a bench to the oldest sycamore in Ireland, a look at Ireland's oldest trees, by the Tree Council of Ireland.

IrishCentral's Irish Heritage Tree program is an ideal way to honor your family, friends, and Irish ancestry while joining IrishCentral in our commitment to keeping Ireland green and growing. Planting a tree, including a certificate of dedication, costs only $69.99 with an additional option to receive your certificate framed for an extra $29.99. Find out more at IrishHeritageTree.com.

Today we celebrate the wonderful history of Ireland's Heritage Trees in the Emerald Island with the Tree Council of Ireland.

Two of the best-known examples of Heritage Trees in Ireland are the ‘Hungry’ Tree at King’s Inns, Dublin, which is a London plane that appears to be consuming a bench, and Lady Gregory’s ‘Autograph’ Tree at Coole Park, South Galway, a copper beech which has been signed by WB Yeats, his brother Jack, George Bernard Shaw, John Masefield, Sean O’Casey, and other famous people.

The mighty King Oak in Charleville Estate in Tullamore, County Offaly is another example of a heritage tree. It is a pedunculate oak and old trees in woods local to the King Oak have been ring counted at around 450 years old. Tradition holds that when a member of the Hutton-Bury family dies, a major branch falls from the tree. It is preserved with religious veneration by the peasantry

One of the most famous ancient trees in Ireland is the Muckross Friary Yew which stands in the center of the cloisters of the ruined Muckross Friary in Killarney, County Kerry.

An account in the Dublin Penny Journal (ANON, 1833) stated: ‘The stem of this remarkable tree, which there is no reason to doubt is coeval with the Abbey, is upwards of twelve feet in height, and about six feet six inches in circumference. It is preserved with religious veneration by the peasantry; and so awful is the effect produced on the mind by its extraordinary canopy, that many persons shrink back with terror on entering within its precincts, and few can remain long without feeling an impatient desire to escape from its oppressive influence.’

Reputed to be the oldest Sycamore in Co Mayo

Not all heritage trees are so dramatic.  Some trees may be outstanding simply because they are of great age or are exceptional examples of their species.  On Ballinrobe Golf Course, near to the 18th hole, there is a massive specimen of sycamore, Acer pseudoplatanus.  Reputed to be the oldest sycamore in County Mayo, it is a particularly impressive example of the species with a height of 20m and girth of 6.23m.

One of the finest ancient sycamore trees in the country grows at Druids Glen.  Estimated to be up to 300 years old, it measures 24m high and has a girth of 7.39m.  An equally fine sycamore with a massive stem and crown occurs at Headfort Golf Course in Co. Meath.

Indeed some of the finest specimen trees in the country can be found at Headfort which is renowned for its magnificent and botanically interesting collection of mature trees.  Here, the trees are obviously valued and very well cared for and have been cleverly incorporated to enhance the picturesque parkland setting of both the old and new courses.

The largest brewer’s spruce, Picea breweriana, in the Irish republic occurs at Headfort and the new course boasts a dawn redwood, Metasequoia glyptostroboides, that is the second greatest girthed specimen and one of the earliest plantings of the species in the country.

Lough Rynn Castle Hotel at Mohill in Co. Leitrim is also well known for its diversity of mature trees although regrettably a very fine oak champion known as the ‘Three Sister’s Oak’ was removed in recent years to facilitate the development of the new golf facility under construction.

The estate features one of the country’s finest tulip trees, Liriodendron tulipifera, at a height of 24m and girth of 5.68m.  Here one can also see a magnificent monkey puzzle, Araucaria araucana, with a wonderful crown that sweeps to the ground and a curious-looking specimen of a holm oak, Quercus ilex with a remarkable burred stem. The western hemlock, Tsuga heterophylla, is a signature tree of the estate with many fine specimens exhibiting perfect spire crowns and reaching up to 32m in height.

Irelands largest Cedar of Lebanon, Cedrus libanii occurs at Adare Manor Hotel and Golf Club.  It is claimed to have been planted in 1645 but a ring count of a low removed branch suggests it may be younger.  The 3rd largest Liquidamber styraciflua in the country can also be found growing at Adare Manor.

At Coolattin is a unique avenue of coastal redwood

In Wicklow, an exceptional specimen of sweet chestnut, Castanea sativa is located at Powerscourt Golf Course in Enniskerry.  This tree is mentioned in ‘The Trees of Great Britain & Ireland’ written by Henry John Elwes and Augustine Henry c.1906.

The tallest specimen of Ireland’s national tree, the sessile oak, Quercus petraea occurs at Coolattin Golf Course near Shillelagh and forms part of the historical woodland landscape in the area.  It has a magnificent fluted stem and measures 37m in height.  Also at Coolattin is a unique avenue of coastal redwood,  Sequoia sempervirens with individual trees typically measuring in the region of 40m high and up to 7m girth while located nearby in the grounds of the Church of Ireland in Shillelagh is a very beautiful and rare example of the cork oak, Quercus suber.

Some heritage trees might make you go ‘wow’, because of their unusual character or peculiar appearance and are usually termed arboricultural curiosities.   They might have strange shapes from natural growth or human intervention.  Oak trees in particular often exhibit unique character.  At Woodpark Golf Course, Mountshannon, Co. Clare there is a beautiful, barrel-shaped, burred oak while at Cahir Golf Club, located alongside the 1st fairway is another oak with a massive burred stem and at Mount Juliet in Co. Kilkenny, there is an ancient pollarded oak with an enormous burred stem displaying its own unique character.

In the grounds of the old ruined church of St. Nicholas of Myra at Adare Golf Club, a beech tree presents a rather strange sight as it has included an ancient gravestone into its stem gaining it a mention in the recently published ‘Trees of Inspiration – Sacred Trees & Bushes of Ireland’ by Christine Zucchelli.

In Kilkenny, at Castlecomer Golf Club, there is a very striking old beech tree, with a fantastic exposed root plate resembling great knobbly toes!  On a limestone ridge, alongside the course at Castlecomer is what appears to be an ancient yew woodland comprising approximately 170 scattered yew trees interspersed with ash, hazel, and sycamore.

Trees may also be of exceptional importance because they make a particular design statement in the landscape or architectural setting.  These would include groups of trees such as found in avenues like the magnificent lime avenue, over one kilometer long, at Carton Estate in Co. Kildare.  One of the earliest surviving avenues of Cedrus libanii also occurs at Carton Estate.

The historic landscape setting at Farnham Estate in Co. Cavan with its extensive parkland and woodland is the result too of a collection of exceptional specimens and strategically placed landmark trees.