Not with a bang but with a whimper the Irish have moved on from the Catholic Church “do as I say” ruling entering a new era of the Irish church. 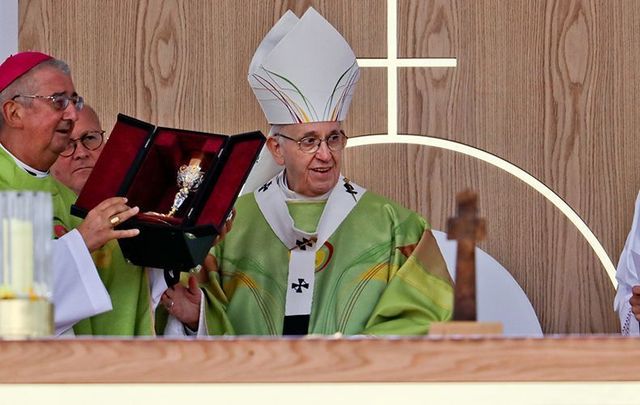 Not with a bang but with a whimper the Irish have moved on from the Catholic Church “do as I say” ruling entering a new era of the Irish church.

The Pope Francis visit occurred in the teeth of a howling gale of outrage over clerical sex abuse from the first Irish generation not to be educated by either priests or nuns. Pope Francis is correctly perceived as a decent good man, but as much a prisoner of the Vatican as were any of his predecessors.

A great deal of sex abuse is born out of the urgings generated by the unnatural condition of clerical celibacy. Yet the Vatican refuses to listen to the obvious. Celibacy was only introduced by the Church remember to save money on priest’s dependants. Women priests are resisted on similar Vatican considerations, money and misogyny.

In Ireland and Europe today we are witnessing the outworking of two forms of colonialism, those of Mother England and Mother Church. On the one hand, we see Brexit, embarked upon with a total disregard for its harmful potential to Ireland, north and south. On the other the effects of the influence of a group of faceless Vatican intriguers concerned more with their wealth and power than the needs of Irish Catholics.

But we are also witnessing either the birth of a new form of Irish Catholicism or a version to an old one i.e. a Church with a particularly Irish or Celtic patina not wholly controlled by Rome.

It is obvious that the era of a brick and mortar Church controlled by do-as-we-sayers, not as we do, is over. It is no accident that three of the most popular people in Ireland today are members of a religious order, Brother Kevin,(feeds 1,000 homeless every day) Father Peter McVerry (a powerful voice for the homeless), and Sister Stanislaus ( who runs Ireland’s largest charity).

It was the Redemptorist Father Alex Reid who set the peace process rolling.

Pope John Paul’s speech at Drogheda in 1979 (the nearest he got to Northern Ireland at a time when Catholics were dying for their faith) had called on the IRA  to use the political means available.

Gerry Adams publicly inquired what were these means and an on-off public dialogue stretching over a number of years ensued between Adams and Bishop Cathal Daly who had written the speech. Father Reid then grabbed the initiative, creating the Hume/Adams initiative the foundation of the peace process.

Reid ’s work in the Falls Road area and as a chaplain in Long Kesh gave him an unrivaled insight into the situation.

Reid’s real strength lay in the fact that he used the respect felt for him as a good man to get on with it and do what he could to solve problems without awaiting the nod from Rome.

Behind Reid and the others lies the tradition of the Irish monks who as commentators as diverse as the venerable Bede and Thomas Cahill have attested saved European civilization. It was Irish Monks who spread education and the gospel throughout Europe in dark times.

However, at the time of the Normans, an English pope, Adrian, blessed their invasion of Ireland to restore an allegedly “barbarous” people, to the rule of Rome. Henceforth with the assistance of Norman swords, the Irish Church would be ruled by bishops appointed by Rome, not wayward abbots.

The Irish stayed faithful to Catholicism and paid for it under the Tudors and Cromwell when the English did not. They paid a higher price after the Battle of the Boyne, in which Pope Innocent XI supported William of Orange against King Louis the XIV of France. On hearing the result of the battle, which insured Catholic enslavement in Ireland for centuries the Pope ordered a Te Deum to be celebrated in Cathedrals.

Despite this, the Irish hierarchy fidelity to the Papacy continued and the Irish bishops support was crucial to the passing of the doctrine of Papal Infallibility at the Council of Trent in 1870, a pity that doctrine cannot be evoked today to eradicate clerical sex abuse

Even more crucially for Ireland, the Irish bishops backed such harmful developments as the Act of Union which abolished the Irish parliament and lead indirectly to the famine as it deprived the Irish of the means to introduce the measures needed to fight the catastrophe.

Catholic emancipation too was a mixed blessing for the Irish as they got Maynooth, but they lost the Forty shilling freeholders right to vote. However, if the laity got weaker politically, Rome’s influence in Ireland grew stronger. Even during the Famine, the Irish bishops were instructed to levy the faithful for contributions to the Pope. The Vatican thus received thousands at a time when money was money and the Irish priests and nuns died in droves alongside their people as the ravages of famine struck home.

The Irish Cardinal Paul Cullen was sent from Rome to ensure that the ultra montaine (Beyond the mountains) right and rule of Rome were enforced. Church building flourished, the Church got control of education and the immigrant Irish spread the influence of Rome in every corner of the globe.

That era has now ended, not with a bang but with a whimper of deceit and delay over abuse. Sister Stan once remarked to me during the 1970s that she saw the Irish church, even then, as a seed which had to die before it bore life again. Pope Francis came to an Ireland which was validating her vision. It is time for the Irish church to assert itself once again.

* Tim Pat Coogans new book “The GAA and the war of independence” will be launched in Croke park in October.