Angry Irish beef farmers have warned there could be a shortage of festive food and drink if they don't get a fair price for beef. 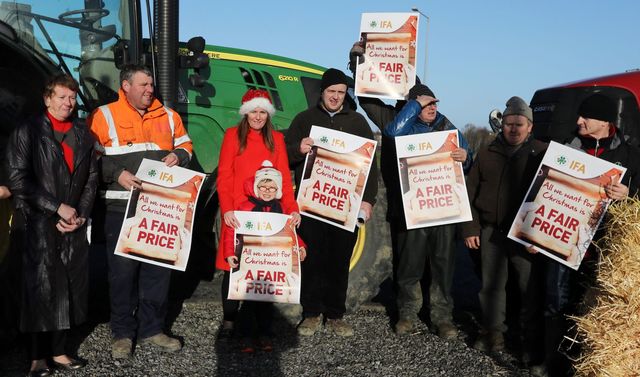 Angry Irish beef farmers have warned there could be a shortage of festive food and drink if they don't get a fair price for beef.

There hasn't been much Christmas cheer from farmers this year as they continue their fight to get better prices for the beef they produce.  They brought the center of Dublin to a standstill two weeks ago with a tractor protest that went on for hours and ended up on Stephen's Green, not far from the Dail and close to glitzy Grafton Street, the city's premier shopping area.

It made for an interesting contrast between two faces of Ireland -- the sophisticated, well-off urban shoppers with their designer bags and the horny-handed sons of the soil with their farm machinery and working clothes.

Great excitement at Stephens Green as 100 tractors line up with 100’s of farmers for protest outside Dáil - end the demise of rural Ireland- fair play for small farmers pic.twitter.com/BhuN39u0s7

For the most part, it was a good-natured confrontation, although the traffic chaos the farmers created with their tractor cavalcade was a nightmare for motorists and the big stores in the city center lost some of their important seasonal business.

Read more: Confronting sexual abuse in Irish dance - this is not about ethics

And it could get worse before the big day.  The poster carried by one farmer had a dire warning: "If Dublin Wants Food and Drink for Christmas, Get Things Sorted Out ASAP."

It's an exaggeration to suggest that farmers could stop all the turkey and ham getting into the capital for Christmas dinner, but the underlying message was clear.  Unless something is done about the rock bottom prices that beef farmers are getting -- prices so low farmers are going bust -- there will be more trouble before the holiday.

Last week the campaign by farmers continued when they blockaded key distribution centers for Aldi and Lidl, the two big low-cost supermarket chains here. The choice may have been deliberate since both store groups specialize in selling produce, including Irish meat, at low prices.

This week the farmers took action against the Tesco supermarket chain which is currently running a half-price beef promotion.  Other store groups like Supervalu and Dunnes may be targeted in the days ahead since they all use meat and vegetables as loss leaders to attract customers.

Farmers are continuing to block a number of roads around St Stephen's Green, as their protest enters its second day https://t.co/e5HTq5M3IL pic.twitter.com/aF6QxYoisJ

The big store groups are not the only offenders, however, even though they want to buy produce as cheaply as possible so they can sell it at bargain prices to consumers.  The powerful meat factories that buy the cattle from farmers to slaughter and process before selling the meat to the stores here and export markets abroad are a bigger part of the problem.  After decades of takeovers and consolidation, there are now just a few big meat factory groups and they operate almost on a cartel basis, keeping prices paid to farmers low so they can maximize their profits.

The best known of these so-called beef barons is Larry Goodman whose family worth is close to €1 billion and whose businesses had assets last year of just under €3.5 billion.  This handful of powerful meat factory players dominates the market for beef here, effectively setting prices. And since over 80 percent of the beef we produce is exported through them it's difficult for farmers here to know how much profit is being made and to influence the price they are paid for their cattle.

In the Dail recently Taoiseach Leo Varadkar defended the government's inaction on the beef farmer crisis by saying that neither he nor the government set beef prices.  It's a free market.

That is correct, but it's equally true that successive governments here did nothing to stop the consolidation in the market that has given the big meat factory players such enormous power in setting prices.  And a couple of them have been heavy donors to political parties here which makes the situation even more suspect.

The bottom line on this is that both the supermarkets and the meat factories here are doing very well from the beef trade.  Cattle prices are very low and fell even further over the past year.  The farmer gets just 20 percent of the price the shopper pays for meat in Irish supermarkets.

The result is that all the small farms around Ireland which produce beef are struggling, with many farmers making no profit or even a loss on the cattle they rear.  They keep going only because their farms have been in the family for generations and they still love what they do, even if they are angry.  Many survive only because of EU support payments and because they -- or their children -- have off-farm income.

There are less than 120,000 farmers in Ireland, and around 80,000 of them are on these small family farms which mainly produce beef from suckler herds -- the cows are not milked but instead feed calves directly, calves which then go on to be reared for beef.  It's not the most efficient kind of farming but there are few alternatives.

Typically these small farms are on hilly, boggy or poor land which is not good enough for either dairying or growing crops, both of which are far more profitable.  (They are the kind of small farms that the ancestors of many Irish Americans emigrated from over the decades.)

In the year 2017/’18 farming incomes overall in Ireland fell by around 20 percent, and most of this was borne by the 80,000 beef farmers thanks to the fall in cattle prices.  The average income for our beef farmers last year was just €8,300.

The average income for our 18,000 dairy farmers was €61,300, which also was down sharply on the year before, even though it is still considerable.   But the dairy farms are bigger holdings of rich grassland so it's not possible for our small beef farms to simply switch into dairying.

Why are cattle prices so bad?  There are several answers to that question, but the central one is oversupply of beef in a declining European market.

The expansion of dairying here has meant a glut of calves every year and most of them end up in the beef market.  Added to this is the shrinking market for beef as people these days eat less red meat for health reasons, especially in our traditional markets in the U.K. and Europe.

Here at home even people like Varadkar and former President Mary Robinson have said publicly that they now eat less meat. Making this trend even stronger is the growing concern among consumers about the impact of cattle emissions on climate change.

In combination, all these factors mean that demand for beef in big countries in Europe like Britain, France and Germany is now falling by around two percent a year.  And since we export the meat from four out of every five beef animals we raise this is a bigger problem for Ireland than anywhere else -- and it's made worse by the growing levels of cheap South American beef being imported into Europe.

It is true that prices for beef -- and even dairy produce -- have been hit hard several times in the recent past and farmers here have survived and even prospered when prices recovered. But this time it seems different because of the factors listed above.  There can be no doubt that the present situation is a kind of tipping point which eventually could mean the end for many of our small beef farms and a way of life that has been there for many decades.

The reaction to this has been less than sympathetic from some economists here who say many of these farmers need to face up to the changing world we live in and accept that small beef farms with suckler herds on marginal land have no future.  They need to change into other enterprises like organic vegetable growing or forestry.   The reality is that most of these small farms are either too small or not suitable for anything other than keeping a small herd of cows and rearing the calves.

Some of the agricultural experts here have been saying quietly that up to half of our 80,000 small farms will never be viable in the future.  On a fundamental level what we are facing is a major change in the make-up and character of rural Ireland.
The small family farm, so beloved by de Valera, has been the defining image of the Irish countryside since the state was founded and indeed for much longer than that.  Losing it will mean a significant shift away from a way of life that made us what we are.

Read more: "How the Irish Became White" is a history book that fails the history test