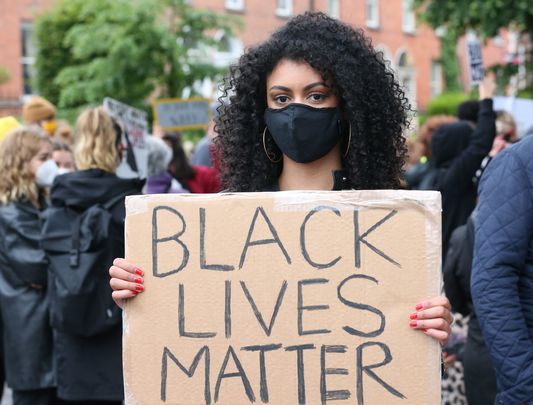 A protester at the Dublin Black Lives Matter protests in the wake of George Floyd's killing. RollingNews

Mary Rose, Conor, and Michael O’Shea made their plea in an op-ed in the Chicago Sun-Times.

Mary Rose, Conor, and Michael O’Shea say “We call on our community to acknowledge our complicity in upholding white supremacy.

Then they ask: “Why does our historic suffering produce disdain rather than empathy for Black people discriminated against today?

"We read with shame the Irish surnames of the police officers dismissed for using excessive force.” 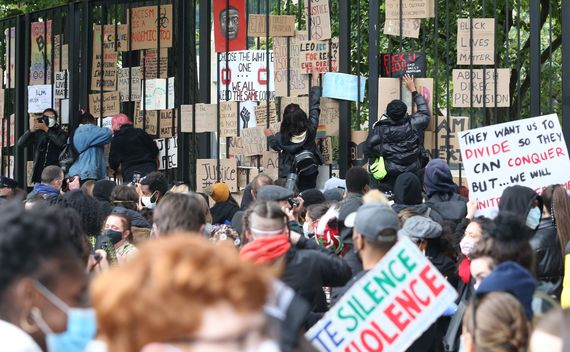 Back Lives Matter protesters advancing on the US embassy in Dublin.

They comment that too many Irish Americans ignore Black history.

“Every Irish American learns the story of Irish success, the rise from downtrodden unwanted immigrants facing “Need Not Apply” signs to winning the White House in 1960. Yet, too often, we use a caricature of our own ethnic history to diminish or dismiss Black American history...

“Why does our historic suffering produce disdain rather than empathy for Black people discriminated against and lynched today?"

They claimed the Irish benefited from racism.

“Irish made it through hard work and thrift, yes, but also by reaping the benefits of white supremacy and settler colonialism as the “Irish became White.” We also did our part to uphold segregation as we competed with Black Americans for low-wage jobs and housing. Irish American residents and politicians did their part to both maintain and profit from segregation..."

They say the protests in Dublin showed many Irish cared:

“We’re encouraged by anti-police brutality protests in Dublin, and by the many Irish Americans who have stepped up in demonstrations in Chicago, Boston, and elsewhere, donated to bail funds, volunteered for community clean-ups, or even just finally admitted that 'Black Lives Matter.'" 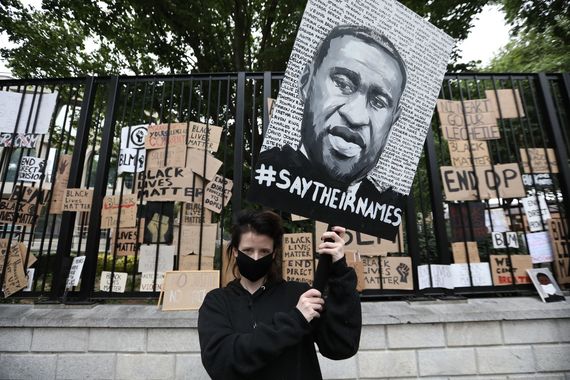 A protester standing in front of the US Embassy in Dublin durning the Black Lives Matter protests.

They then put forward several proposals.

"Educate ourselves about the Black experience in America...Attend cultural festivals and events beyond Irish Fest and the St. Patrick’s Day Parade; actively position ourselves to meet people who don’t look like us. Perhaps start by patronizing a Black-owned business.

"Consistently share literature and media created by non-white authors that feature diverse perspectives and characters with our children...

Interrupt racism in social settings — say, by calling out racist jokes at the local pub or your block party; engage friends and family in honest discussions about race in America."

Do you believe the Irish American community should do more to support the Black Lives Matter movement? Let us know in the comments section below.