Opinion: "In Ireland, we are fast approaching a tipping point where government intervention is becoming overbearingly intrusive." 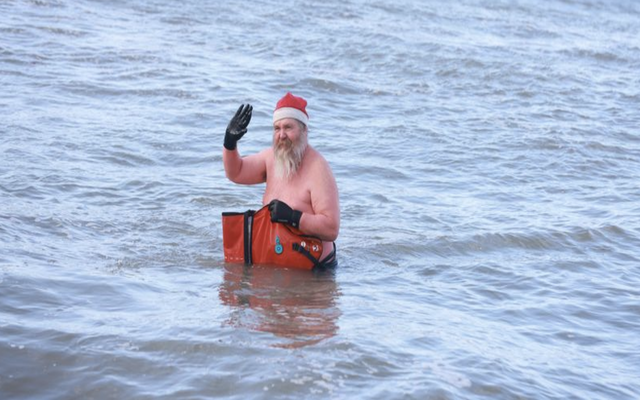 Though there were restrictions in place last week for Storm Barra, one man dressed as Santa Claus defied them on Tuesday and went for a swim in Sandycove, Co. Dublin. RollingNews

The nanny state is running rampant in Ireland.  Who can forget the reason why masks were not promoted in the early days of Covid?  The state’s chief medical officer declared that people could become contaminated by handling face masks inappropriately and that they wouldn't wear them properly. If the classic definition of a nanny state approach is to infantilize those we make decisions for, to treat competent adults like children, then we have it here.

During Storm Barra earlier this month the Irish government made a decision to close all schools and colleges in areas that were considered at high risk of structural damage, the so-called status red zones, where very dangerous weather conditions from intense meteorological phenomena were expected and life and property considered at risk.  Nothing wrong with that.

Controversially the government also closed schools and third-level colleges in status orange zones, where people are advised to be ready to take action in the less likely event the storm hits directly.  Bizarrely the closures were ordered even when the forecast was that the orange level alert would have ended well before schools opened.

So, for instance in Dublin, an orange level alert was due to end at 7 a.m., two hours before the first students were due in class.

Whatever about schoolchildren, the idea that third level students and lecturers would not have the ability to protect themselves and navigate urban landscapes in the face of moderate winds is just plain ridiculous and yet another instance of the nanny state that Ireland has become. Hold on to your hats would have been more appropriate advice.

An abundance of caution they called it, but frankly it was another example of government restricting personal choice and quite illogical as well as they allowed the tens of thousands of their other employees to attend work in buildings in the same zones.

Primary schools are also to the forefront in another example of bubble wrapping kids, with numerous schools banning running in playgrounds. This despite protests from parents and the growing obesity problems with the self-same cohort of students.

In this case the nanny state hides behind health and safety, with obesity tackled by a ban on advertisement of sugary foods. All the bases are covered with individual responsibility minimized.

But education is not the only area where there is creeping paternalism.  Generally, in the realm of health Ireland has restrictive laws limiting choice.  On a league table of nanny states associated with what it terms “sin taxes” drawn up by the Institute of Economic Affairs, Ireland was placed at number eight out of 162 countries, indicating a very high level of interventionism.

Ireland became the first country to introduce a full smoking ban in public places in 2004, and it was the first European country to pass legislation for plain packaging of tobacco in 2015.  It has the EU’s second-highest rate of wine duty (after Lithuania) and by far the highest tax on sparkling wine.

The government’s taxes on beer and spirits are extremely high, with the highest tax on cigarettes in cash terms and the sixth-highest when adjusted for incomes. Also, displays of alcohol in retail stores must be separated and hidden from all other areas.

Most of these restrictions, it should be said, have widespread public support.  So the wearing of seat belts, limiting alcohol to over 18-year-olds, and banning smoking in public places all have broad acceptance. It’s when we move away from protecting the health of the community that problems and objections arise.

In politics we have had, in the not-so-distant past, Section 31 of the Broadcasting Act. This was where the government would not allow any voices on the airwaves that promoted or justified the activities of paramilitary organizations.

This effectively excluded Sinn Fein from TV or radio while it was in effect. Citizens apparently were not mature enough to form their own opinions on what was being said. (Section 31 was allowed to lapse in January of 1994.)

Some politicians want to go further and ban opinion polls in the last week of an election. What next, ban canvassing and campaigning?

The latest bandwagon for attention-starved politicians to jump upon and save us from is the National Lottery. It’s also another cause where they can virtue signal and limit choice.

A government politician, Senator Barry Ward, does not want the ordinary people of Ireland winning money at the expense of “good” community causes.  He is proposing a law which will outlaw bookmakers taking bets on the outcome of the National Lottery.

Now the reason people spend their own money in a bookmaker’s shop instead of with the lottery is that the odds of winning are much higher, a fact that seems to have slipped the notice of Senator Ward who is affronted and incredulous that people would “deliberately go to the bookies rather than buy a National Lottery ticket.”

The reason he is proposing this is that he does not want -- let me repeat this -- people spending their own money as they choose because a percentage of the National Lottery takings goes to community grants which of course politicians can claim credit for. A nanny state needs to be fed after all.

But it also needs to be challenged.  In Ireland we are fast approaching a tipping point where government intervention is becoming overbearingly intrusive.

Big government wants to control our lives from the cradle to the grave, telling us what to think, say and do.  Politicians do not know more than we do about how we should live, raise our children and spend our money, or what we should eat and drink.

By all means give advice and information, but the final decision must be left to the individual. Society will only work with mutual trust and respect between those who govern and the governed.