Taoiseach Micheál Martin called for “all hands on deck in relation to the booster campaign” due to “serious concern” about the Omicron variant of Covid-19. 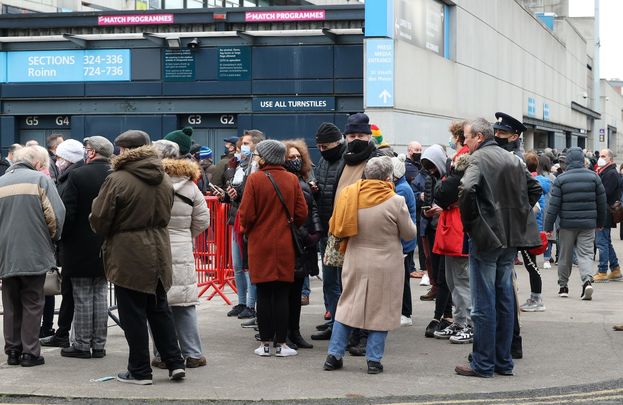 Micheál Martin said on Tuesday that it was “critical” that more GPs and pharmacists get involved in administering vaccines.

Martin was speaking in advance of a Cabinet meeting on Tuesday that pledged a quarter of a million booster jabs every week.

“We need everybody on board now, all hands on deck in relation to the booster campaign because Omicron is of serious concern and we do know that the booster can give great protection,” he said.

“So I thank everybody who has been involved, and I think there’s ongoing engagement now that we can get as many GPs to continue and stay involved and get more involved and likewise to get more pharmacies involved in terms of administering the vaccine over the coming days and the coming weeks. I think that is critical.”

The race to beat the Omicron strain has intensified in Europe. In Ireland, the presence of the strain rose from one percent to 11 percent in a week.

Britain recorded its first Omicron death on Monday. The strain was approaching 50 percent of Covid cases towards mid-week and is expected to the predominant presence within days.

In Northern Ireland, Deputy First Minister Michelle O’Neill, said the North would be “overwhelmed” by the Omicron variant of Covid-19 “very, very soon.”

The North’s Health Minister Robin Swann said that “significantly increased” levels of the Omicron infection were expected and it was possible the North’s hospitals would face acute pressures “at least as bad” as witnessed during the peak last January.

In the Republic, Minister for Health Stephen Donnelly said on Monday that booster shots would now be cut to three months from five months after the second injection, in an effort to accelerate the booster program.

? I have this evening accepted a recommendation from NIAC that the gap between completion of primary schedule of COVID-19 vaccination and a booster dose will be reduced to three months. Boosters will continue to be offered in the priority order previously recommended. pic.twitter.com/W394WqjG74

Among those is immunology professor Luke O’Neill, and yet he still got Covid last week.

However, he has encouraged people to get vaccinated, saying he is only experiencing mild symptoms of Covid-19 as a result of being triply jabbed.

He told The Irish Times that he was deemed a close contact of a confirmed case, and the second antigen test he took on Friday was positive. On Saturday, he got a PCR test to confirm the result, which came back positive on Sunday.

He said, “I’m pretty healthy because of the vaccine...vaccines prevent severe disease, and I’ve got very mild symptoms, thank God.”