Ireland's population is at a record high, there's a major staff shortages and the housing shortage is now a crisis. 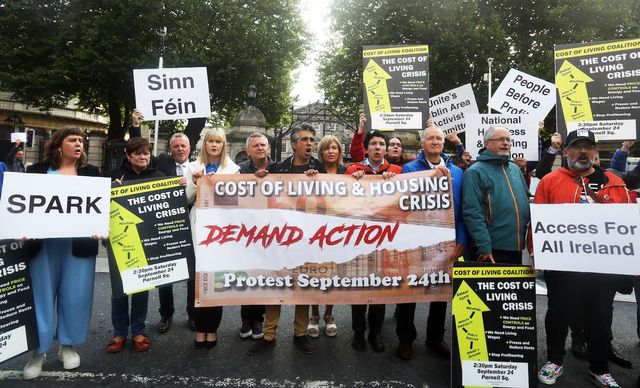 Sept 2022: Pictured outside Dáil Éireann this morning is the poster launch for the Pre-Budget Protest on the Cost of Living Crisis. RollingNews

France recently warned its citizens about moving to Ireland due to high rents and cost of living. The reality is just getting worse but what are the Irish government and Europe to do about it.

The Irish government has decided to raise the minimum wage for workers from January 1. The new rate will be set at €11.30 per hour, an increase of 80 cents. In these days of the surging dollar, it's equivalent to about $11.29 which, by comparison, is still almost $2 below the New York rate that currently stands at $13.20 per hour.

However, in an economy of soaring inflation the increase is unlikely to satisfy anyone as the rate alone cannot reimburse workers for recent increases in the cost of living. Also, it will do very little to address a serious structural problem in the economy, namely the severe shortage of non-skilled workers and also those that are employed in the service sector.

While there has always been competition for employees in the high-skilled, high-earner sectors of the employment market such as financial services, professional services, and IT, what the country is now seeing is a dearth of workers at the coalface. Areas such as hospitality, logistics, construction and personal services have all been hit by a lack of workers, with labor shortages now reaching crisis proportions.

Looking for a plumber? Well, you can wait up to four weeks to get one.  Taxi drivers are a rarity after a late night out, cleaners are in short supply, and cafes and restaurants have had to close early or not open because of staff shortages. Tourism Ireland estimated during the summer that there were 40,000 vacancies in that particular sector.

Paradoxically, with the unemployment rate below five percent, the labor market is in a much better place than it was before the pandemic, indicating a vibrant economy, but it also means that demand for staff is not being met by supply. There are now over 2.5 million people at work in the country which is an all-time record high.

One of the major issues is the high cost and, in some cases, the non-availability of accommodation, especially for low-paid workers and specifically in urban areas where most vacancies are.

In fact, the perilous situation in relation to housing has led to a French Embassy warning its citizens about moving to Ireland.  The embassy advises on its website that “the strong demand and the saturation of the rental market have led to a sharp increase in rents, which are currently much more expensive than in Paris, including shared accommodation. It is therefore advisable for people planning to settle in Ireland to allow sufficient time for this search for accommodation (which can take several weeks)."

While the French government’s concern for its citizens is touching, there is another, more self-serving motive for the warning.  Ireland’s corporation tax rate of 12.5 percent has served the country well by being internationally competitive and providing long-term stability for multinational companies investing here.  But it has always been a bone of contention for the French, with President Emmanuel Macron calling for a change as long ago as 2017.

Following negotiations, all EU and OECD countries signed up to major reform, with the overall aims of addressing tax avoidance and ensuring that profits are taxed where economic activities take place.  This has meant that Ireland will have to increase the tax rate to at least 15 percent and also remove some of its most important tax credits currently available to multinationals.

What this all means is that potential corporations considering investing in Ireland will have to be enticed by non-tax issues.  Education, transport and access to public services will be high on any, list but so too is access to somewhere to live at a reasonable cost for their executives and workforce.

Therefore, it is convenient for the French to point out, in banner headlines, that Ireland’s housing market is broken. In the battle for inward investment – and France is top of the EU in this regard – all is fair. What makes the warning on the embassy website more potent is that all of it is true.

What can be done then to ensure that there are enough workers to keep the economy ticking over?  In the past, we have looked to Eastern Europe to take up the slack.

However, this pipeline of emigrant labor has not only ground to a halt but is in reverse.  For example, there has been a huge exodus of Polish migrants over the past number of years. This is due mainly to the unaffordable housing but also a booming economy at home where housing supply has kept pace with demand.

The organization representing small and medium size enterprises (ISME) believes that one untapped source of employees is those receiving social welfare. A barrier for this cohort is that those leaving the welfare system have a lot to lose in terms of secondary benefits.

According to ISME, if a single mother with a sick child earns more than €9,500 per annum, they will lose access to free medical care.  Similarly, in relation to housing, a single person will qualify for social housing in Dublin if they have an annual income less than €35K.

This threshold is lower in rural areas. Both of these examples are pretty strong reasons for not taking up full-time positions.

The answer is clear – a more nuanced system that allows flexibility for a period of time once a person joins the full-time workforce. The bureaucratic objection to this is that it would lead to welfare abuse.  However, its proponents believe that revenue gained by the taxman through taxes would far outweigh money lost by those who would try to game the system.

Another area of available employees is those who have retired.  If a significant number can be encouraged to “unretire” it would have a beneficial impact on the job scene. With people living longer, healthier lives, extra cash in their pockets can give older individuals more options.

But some economists are suggesting more radical solutions. We should, they say, go down the route of a more generous visa waiver system for poorer countries, workers from outside the European Economic Area who would be happy to come here and sleep four to five to a room for the minimum wage.

But let’s face it, a policy based on slum landlords is an admission of abject failure by the political classes.

The government needs to appoint as a matter of urgency an employment czar, someone who can cut through the bureaucracy, identify solutions that will increase the workforce and push them through a moribund government.

The current political squabbling about which political party should occupy the top job among EU finance ministers shows exactly where their priority lies, and it is not with employers and their daily challenges where roles going unfilled means business opportunities are being missed. Time to take a taxi out of government, guys, if you can find one.