Irish politicians are speaking out after Russian President Vladimir Putin announced a "partial mobilization" for its ongoing war in Ukraine. 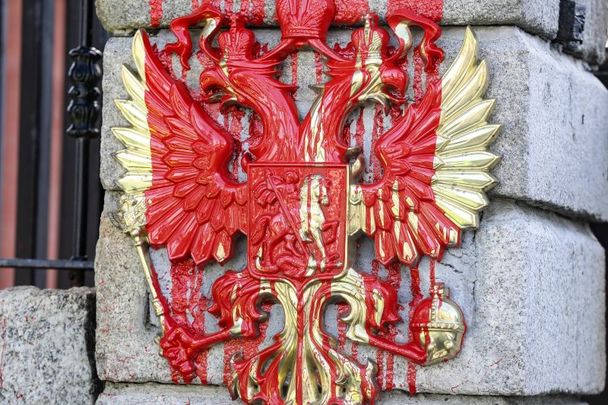 February 24, 2022: Red paint was thrown across the coat of arms of the Russian Federation on the gate outside the Russian Embassy in Dublin. RollingNews.ie

TD Neale Richmond and Ireland's Minister for Foreign Affairs Simon Coveney have both responded after Russian President Vladimir Putin issued a rare, live address on September 21 regarding the conflict in Ukraine.

“The Russian Ambassador continues to work here [in Ireland] as a tool of the brutal Putin regime, launching verbal attacks on our own Government and spreading tragic disinformation about this war," Richmond, who is Fine Gael's spokesperson on European Affairs, told the Irish Mirror on Thursday.

“He and his entire staff should be expelled.

“Perhaps the Embassy could be seized and used to accommodate Ukrainian refugees fleeing his country’s continuing attacks on Ukraine."

According to Ireland's Central Statistics Office (CSO), there were 47,962 arrivals in Ireland from Ukraine by August 7, 2022.

Richmond's comments come the day after Russian President Vladimir Putin, who launched what he called a "special military operation" in Ukraine in February, announced a "partial mobilization" which will see military reservists "called up."

Putin went on to say in his televised address: "The West has gone too far in its aggressive anti-Russia policy, making endless threats to our country and people."

Accusing Washington, London, and Brussels of resorting to "nuclear blackmail," Putin said: "I would like to remind those who make such statements regarding Russia that our country has different types of weapons as well, and some of them are more modern than the weapons NATO countries have.

"In the event of a threat to the territorial integrity of our country and to defend Russia and our people, we will certainly make use of all weapon systems available to us. This is not a bluff."

Putin's announcement triggered protests as well as an "exodus" by some in Russia.

“These comments are a significant escalation in Russia’s brutal war in Ukraine," TD Richmond said on Thursday of Putin's address.

“A ‘partial mobilisation’ in Russia will prolong this tragic, illegal conflict, and increase deaths, including of Russian conscripts and many more Ukrainian citizens."

He added: “Russia is a rogue state acting in a barbaric fashion.

“The fact their Embassy based on my own constituency remains open is extremely disappointing."

Elsewhere on Thursday, Ireland's Minister for Foreign Affairs Simon Coveney called for an end to the conflict while speaking in New York City during a high-level meeting on the need for accountability for Russia’s invasion of Ukraine as part of the United Nations Security Council.

"The path to peace is clear," Coveney said. "The country that made a deliberate decision to start this conflict must now make a decision to bring it to an end.

"Russia must withdraw its forces from the sovereign territory of a fellow UN member state. It must be held accountable for its actions through the international bodies and structures that we together have created for this purpose.

"It is not solely about Ukraine and its future. This is about the entirety of the UN membership, all of us and all of our countries. If we do not reject Russia's actions in the clearest and most stark terms, we allow the world to be governed by force and not by dialogue and the application of international law."

Minister @simoncoveney - Russia must "be held accountable for its actions, through the international bodies and structures we have together created for this purpose. It is not solely about Ukraine and its future. This is about the entirety of the UN membership.” #UNSC 🇮🇪🇺🇳🇺🇦 pic.twitter.com/dhYcwsx7u8