The Irish government published its long-awaited Housing for All plan last week which promises to end Ireland's housing crisis, the biggest challenge facing the country. 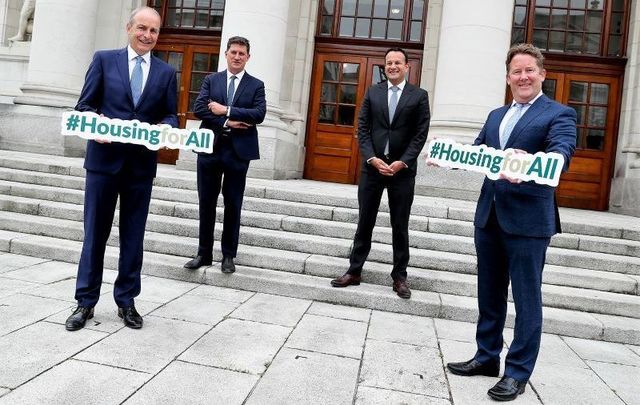 House prices are out of reach for most people. Rents have soared to penal levels. We're only building half the homes we need. And politicians have been unable to sort out the mess which began with the crash 10 years ago and has got worse instead of better in recent years.

So will this new plan work? Well, time will tell. Understandably there is a lot of cynicism in the air because it's not the first master plan for housing that has been produced.

But there is one big difference with this latest effort, and that is the amount of money involved. The government has committed to throwing a €20 billion mountain of cash at the problem.

The plan is to spend €4 billion a year over the next five years to produce 33,000 new homes each year up to 2030. That is double the number we are building at the moment.

Where will the money come from? It will be borrowed, of course, increasing even further our national debt which is already one of the highest in the developed world.

Whether this is a wise strategy will be argued over by the economists. Most people here won't care because our dysfunctional housing market is driving everyone nuts.

But it's a huge amount of money relative to the size of our economy and annual revenue. It will all have to be paid back at some point and it's by no means guaranteed to fix the problem.

The danger of inflated costs, inefficiency, and waste is very real. Money alone won't solve our housing problem because it's not just a lack of funding that is the difficulty.

Already the cost of building materials here has soared. There is a chronic shortage of skilled construction workers. Our planning system and the right to object to new developments cause interminable delays.

But despite these limitations, there is an extra factor in the equation now that is forcing the government to take this dramatic action. Put simply, the members of the government parties are fighting for their political lives.

Housing is the number one issue in the country and the voters have run out of patience. Sinn Féin, with its simplistic but appealing solutions, is way ahead in the polls. The government is running out of time and is facing annihilation at the next election, now just over three years away in early 2025.

For that reason, the coalition government -- Fianna Fáil, Fine Gael, and the Green Party -- has to act now, and act fast. Unless they can show real progress in the next three years, they are toast.

What that means is that the Housing for All strategy has to work. The target of 33,000 new homes a year must be reached by 2024, before the voters go to the polls in the next election. Even if that is achieved, the political outcome is far from certain.

So what is in the Housing for All plan? It promises a wide range of measures, all backed by state money (the 130-page plan published last Thursday can be read here).

It includes measures to increase the provision of social housing, affordable homes and cost rental homes, as well as private housing. The aim is to deliver 90,000 social homes, 36,000 affordable homes and 18,000 cost rental homes (with rents fixed at the building cost rather than the rental market) by 2030. Plus there are measures to help the private sector deliver 156,000 homes in the same period.

The plan requires all local authorities to produce proposals for housing in their areas by December. It expands the role of the Land Development Agency to provide thousands of new homes on state lands. It has measures to encourage the provision of new homes in underused buildings in town and city centers. And it includes reforms to curtail delays caused by court actions taken by NIMBY (Not In My Back Yard) objectors.

The plan also promises to tackle land hoarding, with a proposal to claw back much of the profit made by speculators when land is rezoned. It includes a vacant site tax to force developers to build immediately rather than sit on sites with planning permission. And there is much, much more, reaching across all aspects of zoning, planning, and construction.

A key part of the plan is the nomination of what it calls "pathways" to increase the provision of new homes. These pathways will be overseen by named government departments and state agencies which will have the responsibility of seeing that they work.

A lot of what is in the plan does seem aspirational and complicated. But in fairness to the Minister for Housing Darragh O'Brien, that is a reflection of the complex nature of housing provision here and a recognition that it will take progress at all levels to solve the problem.

It's not just a matter of building lots of social homes, which is the Sinn Féin policy. It will require innovation at all levels in the housing market to make a real difference.

There is a big emphasis in the plan on extra measures to help the "squeezed middle,” the people who earn too much to qualify for social housing but not enough to get the size of mortgage needed to buy a home here at today's prices.

There are proposals on "shared equity," with the state paying for part ownership of a new home until the individual is ready to buy that out. And there will be access to more loans through local authorities.

Builders will have to provide 10 percent of new developments for affordable housing in addition to the 10 percent that has to be provided for social housing at present. There will also be a requirement that a significant portion of new developments must be offered for sale to individual buyers rather than the entire development being sold as a single lot to funds who then put the homes on the rental market.

This last measure addresses a problem that has become a real sore point here recently as big investment and pension funds have swooped in to buy up entire developments and cash in on high rents here. The so-called "vulture funds" have pushed individual buyers out of the market for many new developments recently and this has caused great resentment.

But there could be unintended consequences to this. Construction firms say that banks here are still too slow to lend and that the funds provide upfront total funding for major developments. Without them, the builders say, these developments would not be built at all.

The fact is that anything that increases the supply of new homes here will help. If enough new homes are provided then rents and prices will eventually fall.

So limiting the role of the foreign investment firms in the housing market may be counter-productive. It's an emotive topic and an interim balance needs to be struck, which is what the plan attempts to do.

Another difficult area is planning. We have the farcical situation where politicians who berate the government about housing routinely oppose new developments in their electoral areas to keep their NIMBY voters happy.

The Sinn Féin leader Mary Lou McDonald is currently objecting to a development of 1,600 apartments in her area in Dublin city center. Her Sinn Féin colleague in the Dail, Aengus O Snodaigh, is objecting to another big development in his area on the west side of the city.

The plan makes some attempt to prevent such objections delaying projects. Even if planning permission is granted, objectors can seek judicial reviews in the courts where there are lengthy delays.

It's not unusual for projects which have been given permission by local planners to be held up for three or four years. The problem for the government is that property rights are embedded in our Constitution and making changes is difficult.

Another problem is that giving local authorities -- county councils and town councils -- the task of providing a lot of social and affordable housing is asking a great deal of them. They don't build homes directly themselves anymore. They have planners, architects, surveyors, and so on but not large construction teams.

They can produce plans for new developments which then go out to tender among private builders. And that will increase pressure in the same pool where already there are not enough workers and material costs are rising rapidly.

So will the Housing for All plan work? Certainly, it will help. But it won't be able to overcome the limitations in the industry here, at least in the short term.

And like any market which has billions poured into it, it will probably increase prices rather than reduce them over the next few years. The minister and the government have a real fight for survival on their hands.