On both coasts of the Wild Atlantic Way is the reality that we are about to experience again the craic and stimulation created by election fever. 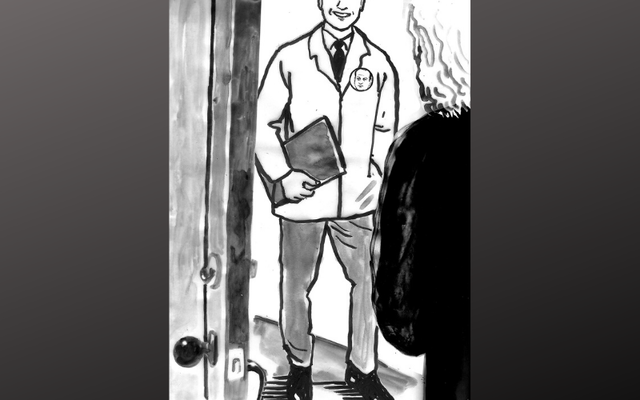 Canvassers arrive at the door of our man Cormac McConnell. Caty Bartholomew

Cead Mile Failte again to all of you, wherever you are reading this out there in the green yonderlands, and the great news developing by the minute on both coasts of the Wild Atlantic Way is the reality that we are about to experience again the craic and stimulation created by election fever.

Ours is a snap Saturday excitement which will be over before we realize it on February 8-9. Yours will last a lot longer than that but is creating huge waves of excitement and anticipation over here.  Truth is that no race on earth enjoys an election more than we do.

Before dealing with this epidemic of election fever, however, in keeping with modern marketing trends globally, can I give you all early notice that I will be making an exclusive special offer in this space next week.

Free, gratis, I am moved to offer ye a gift which will give the winner the thrill of a lifetime and may indeed transform that lifetime both commercially and spiritually into the future. Ye will have to keep close tabs on the Irish Voice next week, despite your election fever, in order to be the beneficiary!

And, furthermore, because I am in great spirits altogether, I’m inclined powerfully to state that I’m driven to promise there could be two or even three winners to benefit forever after, at no cost to themselves, from this very unique special offer indeed. Where else would ye get the chance of a special offer like that?

Don’t miss the Irish Voice next week for your own sake and that of your loved ones and, no, despite the rabid election fever over here in East Clare, with canvassers rattling our doorbell every 10 minutes, I am still totally sane and joyous. And I will totally honor the promise defined above.

Returning to our election excitement over here, I have to pay tribute to the volunteer canvassers of all parties who were braving heavy rain and winter chills from Lough Derg and the Shannon to support their political parties and independent candidates.  The first of them was ringing our doorbell only a matter of four hours after Taoiseach Leo Varadkar formally announced the dissolution of the outgoing government.

Read more: Ireland's General Election 2020 - who would you vote for?

As a matter of personal interest, for what it is worth, the canvasser already was aware that I have voted for Fianna Fail all my lifetime in this lively republic, and will stick to that this time around too, but was interested in the fact that I was loud in praise of Varadkar’s work on behalf of the nation.

He won’t earn my first preference vote, I said, but his Fine Gael candidate here locally will surely earn a stroke of respect and appreciation down the ballot paper.  It will be the first time in my electoral life I’ve voted for a Fine Gael candidate but, sure, from my time in journalism in Clare and elsewhere, don’t I know the most of them well.

Times change, usually for the better, and we need to be aware of that and react to it, whether in East Clare or at a caucus in Iowa involving Democratic hopefuls.  The canvasser on my doorstep put it well when he remarked that the ballot boxes of 2020 hereabouts are infinitely preferable to the bullet boxes of the too recent past when the Black and Tans were released upon us by Winston Churchill.

We have long political and social memories, as ye all know well, wherever you are reading this, and democratically conducted general elections, on both coasts of the Wild Atlantic Way, are calming episodes that help to assuage old hurts and fears.

I’ve covered many elections over here as an old hack for newspapers and later radio outlets on both sides of our strange border which is the upcoming Brexit frontier between the departing John Bull and the European Union.  You learn more than a little along the way.

The standout lesson for me, at any rate, is that the party tallymen and women, drawn from the unpaid ranks as such as the canvassers on my doorstep these East Clare evenings and nights, are invariably 100 percent correct in their predictions. They know the score long before the official counters around the ballot boxes have arrived at an official binding decision.

They can even foretell which candidates are likely to be battling it out for the last seat in our multi-seat constituencies on this side of the border.  They can on many occasions even tally the wafer-thin margins by which those final seats will be won or lost, and frequently those margins are less than 100 votes.  It’s an incredible achievement proven time and again.

If there is one past election victory which I remember most of all it was the victory of the young Bernadette Devlin after a long count and battle in Tyrone.  Her victory signaled the beginning of this new era which, quite incredibly, has led to the reality that there are now more green (nationalist) votes in the Six Counties than there are orange votes. I never thought I would see that day arrive in my lifetime but, as stated above, times change in a fashion only party tallymen can fathom out.

I have to go now because the doorbell is ringing loudly again and there is surely another canvasser seeking the support of this household for his candidate.  I will treat him, or her, with the greatest of respect and admiration even though he/she knows already, in this intimate town, that I’m a Fianna Fail supporter.

Excuse me now and remember that special offer coming up in next week’s issue.

Read more: It is high noon in Iowa as Democratic battle gets very nasty