Ireland's fishermen and farmers took to Dublin to protest what they feel are unfair regulations. 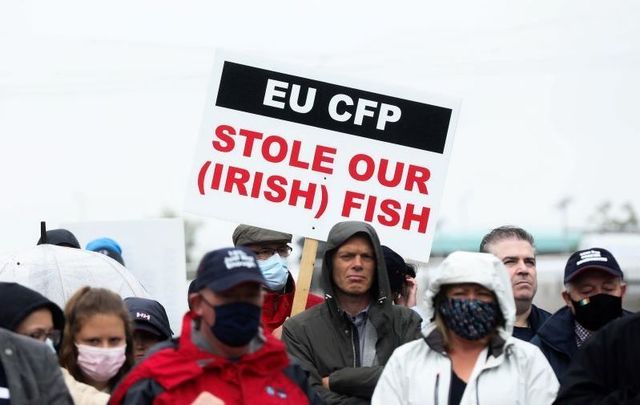 June 23, 2021: Fishermen protesting outside a meeting of the Dáil in Dublin against a lack of support from the Irish government against the EU Common Fisheries Policy. RollingNews.ie

It was a surf and turf sort of week in Ireland. We also had the Democratic Unionist party implosion to worry about, and the spread of the Delta variant, and whether the restrictions on bars and restaurants here could finally be lifted next week.

But it was fishermen and farmers here who made much of the news last week as they complained bitterly about what the EU is doing to them.

They are not happy with the Irish government either, which they say is failing to stand up for them. The issues involved for our fishermen and farmers are different, of course, but they go back to the same roots, as we will explain in a moment.

First the fishermen. In the middle of last week, a huge flotilla of fishing boats sailed up the Liffey in Dublin city center to protest at what our fishermen say is a crisis in their lives. Because of Covid, the Dáil was sitting in the Convention Centre beside the river that day so the fishermen were able to bring their arguments directly to the politicians.

It was the most picturesque protest we have seen here in a long time. The trawlers, big and small, had come from around the coast. They did not completely block access to Dublin Port but they filled the river, and for a while, nothing else seemed to be moving.

What prompted the protest was the fishing part of the Brexit deal which the EU has done with the U.K. and which is now coming into effect. It means the amount of fish that EU boats (including Irish trawlers) can catch in British waters has been drastically reduced. The Irish fishermen claim that this country has taken the biggest hit, far bigger proportionately than that taken by France or Spain, for example.

Thanks to Covid, which closed restaurants across Europe for the past year or more, fish exports from Ireland had already been decimated, the fishermen say. So this is a double blow for them, one they claim will destroy the Irish fishing industry. They say their earnings will be down by more than half, making many of our trawlers non-viable.

Like our own waters, the seas around Britain are fertile fishing grounds. Many Irish trawlers on the east and south coasts take as much as half of their annual catch of prawns, mackerel, and some other fish there.

But because of the Brexit deal, that will be slashed. It will also mean that more trawlers from other EU countries like France, Belgium, the Netherlands, and Spain (which have largely fished out their own waters) will do much more of their fishing in Irish waters instead of British waters.

This is already a problem, the Irish fishermen say, because under the EU Common Fisheries Policy these countries have the right to fish alongside our boats in Irish waters and they have far bigger quotas than Ireland does. They do so on an industrial scale, using huge trawlers that are far bigger than most of the Irish boats. 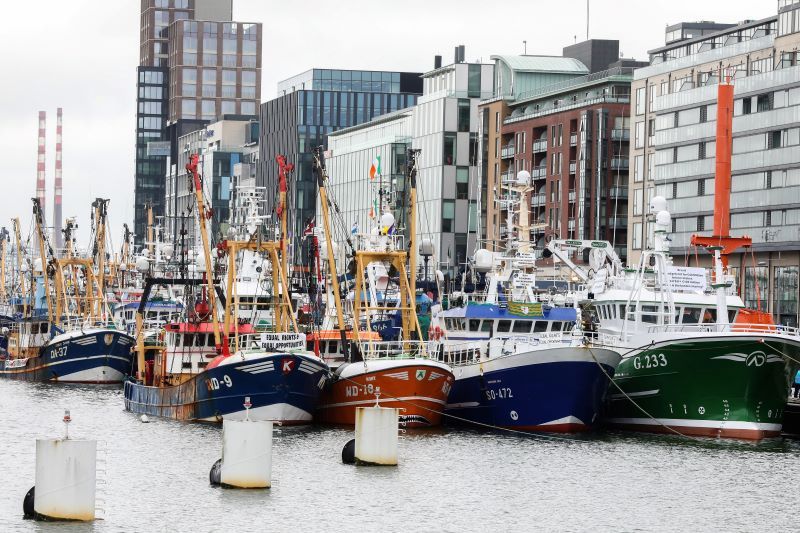 June 23, 2021: Trawlers on the River Liffey in Dublin. Fishermen are protesting in Dublin against a lack of support from the Irish government against the EU Common Fisheries Policy. (RollingNews.ie)

Given the small size of the Irish Navy, the amount of protection we can offer to the Irish fishing industry is minimal. There are ongoing claims that the foreign boats regularly flout the rules on where they can fish, the amount they catch, and the methods they use. And this is likely to get even worse when these boats are limited in what they can catch in British waters and concentrate more on Irish waters.

The fishing industry in the U.K. is only a tiny proportion of the overall U.K. economy. But it became a huge issue in the Brexit campaign and a key plank in Boris Johnson's jingoistic claim that the U.K. would "Take Back Control."

The result, as we said, is that the Brexit deal now means that the amount of fish that EU boats can catch in British waters has been drastically reduced. And the country that is hit hardest is Ireland.

But it's not just the Brexit fallout that is the difficulty. The roots of the overall problem for fishing here go back to 1973 when Ireland joined the EU (then called the EEC).

The key objective at the time was to look after Irish agriculture, a far bigger part of our economy than fishing here. So we gave away much more than we should have on fishing to get as much as we could for farming from the Common Agriculture Policy (CAP).

The basic principle of the Common Fisheries Policy is that all EU boats should have access to fish in all EU waters, including the surrounding territorial waters of each member country. When the shares for fishing were negotiated, these were decided mainly on the size of each country -- so big fishing countries like France and Spain got most and small countries like Ireland got least. Back then it did not seem to matter that much because all the concentration was on agriculture.

Various attempts have been made over the years to change this, but the basic problem remains. It was summed up by one of the placards on the trawlers in the protest last week. It read: "Ireland has 22 percent of EU waters. Ireland gets 3 percent of fish caught in EU waters."

It's worth repeating that these damning figures are for fish in Irish waters. It's no wonder that Irish fishermen are so angry. And now the Brexit fallout is going to add even more to their justifiable sense of grievance. 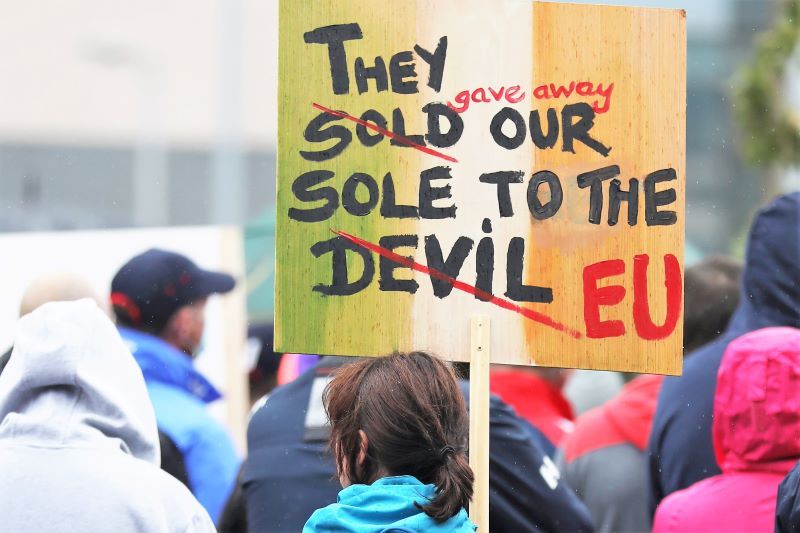 June 23, 2021: Fishermen carrying signs and banners as they protest outside a meeting of the Dáil in Dublin, against a lack of support from the Irish government against the EU Common Fisheries Policy. (RollingNews.ie)

As we said above, it was not just the fishermen here who were up in arms last week. Irish farmers, despite all they have gained under the CAP, are furious as well. This is because of the agreement made in the EU last week on CAP reform to bring it more into line with wider EU policy on climate change and the environment.

The CAP eats up around a third of the total annual EU budget and the figures involved are enormous. Most of the money goes on farm subsidies, particularly the system of direct income payments to farmers.

The reform deal, which has been produced after several years of difficult negotiations, sets out how nearly €400 billion -- that's billions, not millions -- of CAP farm funding will be spent over the next five years.

So far the deal is provisional, but it's unlikely to change that much given the level of support for it. There is general agreement across Europe that the CAP has to be reformed to reduce the environmental impact of intensive farming and to lower the sector's emissions that are a major contributor to climate change.

The basic aim is to move CAP money away from large-scale intensive farming to more nature-friendly farming, and in doing so to reduce the 10 percent of EU greenhouse gases now emitted by agriculture (in Ireland farming produces 35 percent of our greenhouse gases!).

There will be more money for small family farms, paying these farmers more to be custodians of the land, the environment, and biodiversity, rather than always trying to maximize production with the use of chemicals and fertilizers. The deal will require 20 percent of all CAP money in 2023 to be spent on "eco-schemes" that protect the environment, rising to 25 percent in 2025.

Examples relevant to Ireland could include restoring wetlands to absorb carbon, returning large areas to forestry and wild landscape, as well as supports for organic farming. All of this may sound virtuous to urbanites, but from Ireland's point of view, it is highly problematic.

That is because agriculture is proportionally a much bigger part of our economy and much of our output, in dairy and beef, comes from mid-sized and larger farms that are worked very intensively. These farmers also take up much of the direct payments, and moves to change that will hit their income hard.

It's not surprising, therefore, that the Irish Farmers Association last week slammed the EU agreement as "a bad deal" for Irish farmers. "The combined effects of the proposal will decimate a cohort of farmers in Ireland," the group said.

That reaction is not good news for the government which will be under intense pressure from farmers in the coming months to work to soften the provisional deal. For our farmers, just like our fishermen, it's a double whammy, the other part being the impact on Irish agricultural exports to Britain after Brexit.

For our farmers, however, it's likely to be a losing battle. Change has to come, even if the level of impact here will be severe in comparison with most other EU countries.

The solution -- moving to a less intensive kind of agriculture -- is possible, as we can see from the small but growing organic farming sector here. But it requires a change in the national mindset, an acceptance of lower-income levels, and a different lifestyle on farms.

That's a huge topic, one that we will be returning to here in the future. The 40 shades of green will be taking on a whole new meaning.