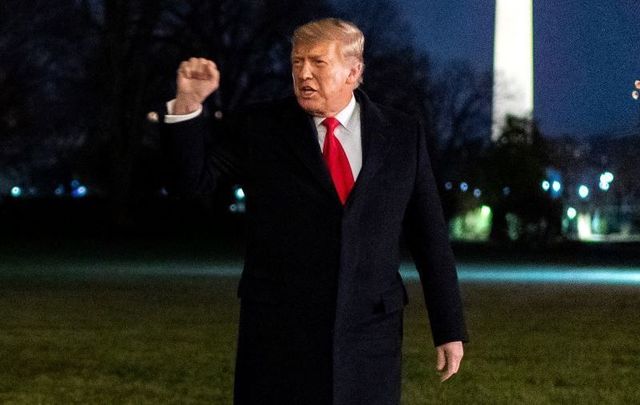 Remember back in 2015 when Donald Trump glided down an escalator in Trump Tower to declare he was running for president and told us that the Mexicans were the real Enemy of the People?

He soon added, and added, to that list -  Muslims, illegal immigrants, the Deep State, the Fake News Media, the Swamp, even former members of his administration. All Enemies of the People.

Well, who’s been proven as the real enemy now?

We found out last Wednesday, January 6, a horrifying day that will forever live in American infamy. A day when the Trump Train crashed right into our majestic Capitol building in Washington, D.C. and burned.

Donald J. Trump -- chief instigator, wannabe dictator, criminal mastermind, and the world’s worst sore loser -- has a new title that will be a fitting epitaph: Enemy of American Democracy.

It’s still doesn’t seem real, the siege on January 6 when a crazed, bloodthirsty mob took their marching orders from Trump and his various stooges at a “rally” and headed for the Capitol, intent on overturning an election that was legally held. If they couldn’t do that, hanging Vice President Mike Pence or shooting House Speaker Nancy Pelosi in the noggin on live TV would suffice.

A domestic terrorist assault on American soil, in the seat of our government. Five deaths, destruction to the Capitol, a total desecration of our values, our democracy, a country left divided and shocked to the core. All thanks to the extreme mental instability of Donald Trump.

Make America Great Again…with organized insurrection if necessary after all the election challenges are shot down by the courts. Trump has been loudly dog-whistling for years, and last week the hounds were set loose.

A question for the 75 million 2020 Trump voters – is this what you signed up for? Crazed MAGA maggots swinging from the Senate balcony and smashing windows? Violent thugs in combat gear beating police officers with American flags for all the world to see?

We’re pretty certain that millions of Trump voters -- maybe, hopefully, a majority -- were outraged by the failed coup and the abhorrent violence. They voted for Trump for their own reasons and that was their right – that’s what we get to do as Americans.

But how could anyone who loves our country, respects law and order – isn’t that, in giant caps, supposed to be MAGA gospel? – and believes in peaceful transition be anything but revolted by planned violence against our government?

Of course the actual perpetrators, Trump’s hardcore acolytes, thought they were doing God’s work. They’re so deluded that they can’t see the obvious: their cult leader actually can’t stand them and only ever used them.

The Daily Mail had a quote from a source that sums up Trump’s thoughts about his marauding base: “Trump was raging because the poor white trash mob made him look bad. When he saw pictures of the half-naked guy in the fur hat he started complaining they looked ‘cheap and poor.’”

Imagine the tattooed creep with horns who posed for photos at the Senate lectern, or the guy sitting at Pelosi’s desk, pulling up to Mar-a-Lago to try and meet their idol? They’d be escorted away in cuffs if they got within a mile of the place.

Think their offspring would ever mix with Ivanka’s?  No way. The Trumps love when the riff-raff scream “lock her up” at rallies and rail against voter fraud, but when the lights dim? Then they become Trump trash.

Speaking of the disgraced president’s adult kids, they keep finding new ways to show how repellent they are. Don Junior, a punk hanging off his father’s coattails, elected to nothing and yet threatening to “go into the backyards” of Republicans who wouldn’t “stop the steal,” should lawyer up, stat.  He was an opening act for his dad at the D.C. hate fest, and if there’s any justice he’ll face federal charges for whipping up the insurrection mob.

Another with blood on his hands is Rudy Giuliani, the cartoonish law and order tough guy now facing disbarment in New York who gleefully told the rioters, “Let’s have trial by combat!”  How is this 9-11 profiteer – he made millions posing as “America’s Mayor” – walking the streets after using such incendiary language?

There are so many Trump zombies who would not accept that their candidate got buried at the polls by Joe Biden.   We know their names…Cruz, Hawley, Gosar, Brooks, etc.   Craven, cynical empty suits who care nothing about their country and everything about their own political backsides which must be pretty sore because we now know them as national disgraces forever.

On the bright side – MAGA is dead. The political future for the Trumps is dead. An impeachment or perhaps worse, jail for multiple crimes, awaits Donald Trump.

America the Beautiful – that’s what we are. Wounded yes, but better days are on the horizon for sure.