IrishCentral Contributor John Joe McGinley shares the terrible story of the Great Flood in Gweedore that occurred in Co Donegal in August 1880. 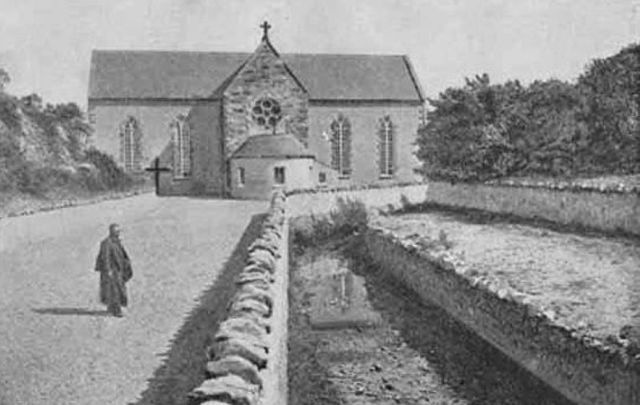 On the 15th August 1880, tragedy struck the parish of Gweedore while parish priest Father James McFadden said Mass in a packed St Mary’s Chapel in Derrybeg. This is known in Gweedore as the great flood, while the Irish Times would describe the event as the Gweedore catastrophe.

The 15th of August was the feast of the Assumption of Mary and the local church of St. Mary’s in Gweedore was full with many parishioners standing around the chapel.

On that fateful day, a freak storm broke out and a deluge was thrown from the heavens as thunder rang out. The church was built in a ravine where mass had been said in secret during the penal laws which outlawed the Catholic rites and a mountain stream ran under the floor of the church.

Soon that stream was overflowing and within minutes of the storm, the water rose up through the floor and the masonry gave way to a deadly torrent that engulfed the worshipers.

The doors became jarred by the rising tide and people began scrambling out of the windows. Water levels inside the church rose to an estimated 12 feet.

Father McFadden was aware that fatalities had taken place and began to give general absolution to the congregation and then made his own escape jumping from the altar smashing a window and making it to safety. Sadly, five parishioners died and over 100 were injured.

The others who were drowned were Grace McGarvey, Carrick, Derrybeg; Conal Boyle, Inishmaan Island; and Enrí Ó Gallchobhair and Neil Doherty, both of Magheraclogher, Bunbeg.

To fully understand the tragedy, it is necessary to look at the history of Ireland and Gweedore to see why the Chapel of St. Marys was built where it was in a remote ravine over a river and susceptible to flooding.

This unsuitable location ensured that the deluge which engulfed the unfortunate parishioners, whilst a freak event of nature, created more damage than was necessary to both parishioners and the building.

This was because of two things, firstly the restrictive penal laws imposed on Irish Catholics and secondly the stubbornness of successive protestant landowners in Gweedore.

To avoid arrest, Catholic priests and worshippers had to find hidden areas in the Irish countryside to celebrate Mass. ‘Priest Hunters’ were employed to seek out and arrest unregistered priests.

Many of these places of worship were marked with “Mass Rocks”. The Mass Rock was oftentimes a rock taken from a church ruin and used as a place of worship for Roman Catholics.

Usually, the priest arrived in disguise and placed the sacred vessels on the rock while assigned locals kept a lookout from vantage points in the landscape from where they could see any approaching English militia. There are still many Mass rocks all over Ireland, the faithful still consider them to be sacred places.

During the years of the penal laws, it was in this ravine in Derrybeg where St. Marys would one day stand, that Gweedore Catholics gathered into worship. When the laws were relaxed, and the people of Gweedore sought to build a permanent place of worship. This barren land was the only place they were allowed to use by the landlords of the time, who were reluctant to allow a roman catholic chapel on their land.

So, St Marys was built in the ravine above the river that would so dramatically overflow on that dreadful day 15th of August 1880. Tragically five parishioners died with hundreds injured. The Irish Times labelled it as “The Gweedore Catastrophe” and the flood made headlines across the globe.

This is an account of the tragedy which appeared in the New Zealand Tablet on the 15th of October 1880:

Sir, — There comes to-day the sad news that on Sunday last, in a wild and romantic glen in Donegal, a mountain flood, bursting into the Catholic chapel during Divine Service, submerged the crowded building, several of the worshippers being swept away and drowned. I know the place well; and the singular circumstances and the curious history of the little church thus destroyed, while they explain the tragedy which has just occurred, afford us an illustrative glimpse of Ireland a hundred year ago. Between the pass of Dunlewy and the sea, about two miles from Lord George Hill's pretty rustic hotel at Gweedore, the traveller reaches the hamlet of Derrybeg. Half a mile or more " up the glen" stands, or stood, the chapel in question. Even when told I was within a few perches of the edifice, I looked for it in vain on my first visit to the spot some years ago. After a while I noticed, rising, as it seemed in a brake of heather, a stone cross. Drawing nearer, I saw that the cross stood on the pointed gable of a building, the roof of which was below the level of the land around. I found myself on the brink of a wild ravine, at the narrow bottom of which a noisy mountain river brawled and danced its way from lake to sea. Down below, built across or upon the stream was the "chapel " of Derrybeg. Its walls on either hand almost touched the side of the rocky fissure, on which wild evergreens and dwarf oak clustered beautifully. I descended and found as neat and as impressive a little church as ever I entered, albeit everything was simplicity itself. All was well ordered; and scrupulous cleanliness and devotional care were observable in the most minute arrangements. Far remote as it was from the noisy world, I noted that even here the village blacksmith could bear his daughter's voice "singing in the village choir," for the hymn books and even the harmonium were at hand ; while the river outside, and beneath the floor where I stood supplied a never-ending " thorough bass." Of course, I asked why so singular a spot had been chosen as the site of the building. "It was not all choice," replied my companion, the pastor of the district ; " not an inch of ground would the neighbouring lords of the soil give us on which to erect a roof ; we are here by proscription ; " and then he told me the story. For nearly 200 years, or ever since the early part of the reign of Anne, this ravine was the secret place of worship for the Catholic peasantry of the neighbouring glens. Sentries were posted on the edge of the cliffs above, while, on either brink of the river below, the mountaineers knelt — a ledge on the rocks, still pointed out, sufficing as an altar. Indeed, the place afforded unusual advantages or facilities for such proscribed devotions, so easily could several hundreds of worshippers be secreted there. About 100 years ago the sentries happily were dispensed with, and a little wooden box was fixed on the natural altar ledge, so that the candles were not blown out by the wind. Later, a permanent wooden hut, open at the end facing down the river, was put up, within which the officiating priest and his attendant had room to stand or kneel. There are old men living near Dunlewy, I believe, who remember this hut — the river gorge, with the sky for a canopy, being the only church or chapel where the people prayed, under summer sun and winter rain, till a comparatively recent period. lam not astonished that, independently of the refusal of landlords to give a site for " a Popish chapel," this spot, hallowed by such memories and associations, should have been clung to by the people. So, thirty or forty years ago, they, by volunteer labour, blasted away the bottom rocks, bridged over the stream, and built their 'new chapel " in the cleft of the ravine I have described. I would ask you, sir, for kind permission to add a word or two about the poor people on whom the calamity of last Sunday has fallen— the congregation of worshippers in that little church. It is my belief that there does not breathe within our islands a rustic community more nearly approaching in simplicity of manners and purity of lives the picture Longfellow has drawn for us of life in the village of Grand Pre. Though privations have tried them sorely during the past year, they have contributed naught to the records* of disorder or crime. Death, swift and terrible, has now filled with wailing and grief their humble homes — these homes where, as I well know, a wayfarer ever found a smiling welcome, and wherein 'a stranger was a sacred name." Their good friend and benefactor, Mr. William A. Ross, of Dunlewy Castle, is now away in Egypt and may not hear of this tragedy for weeks to come. In his absence I shall be glad to receive and forward to the clergyman of the district, or to the Most Rev. Dr. Logue, the estimable Bishop of Raphoe, any help which kindly and sympathetic hearts on this side of the Channel may feel disposed to contribute. lam aware, sir, that it is not lightly you permit any such appeal to the readers of the Times, and I can only hope that you may perceive in the circumstances of the case some ground for extending the privilege on the present occasion.

Yours very truly, A. M. Sullivan.

Not only did the freak storm damage the Church but the surrounding countryside was devastated, houses rendered uninhabitable, livestock killed, and crops ruined. An appeal was sent to the British parliament for aid.

£100 was sent on the 18th of August as an initial amount with several members of the British government contributing.

Father McFadden who became parish priest in 1875 continued to serve in the parish until 1901 during which time he challenged landlords for their cruel treatment of tenants and sought international aid for people who had been evicted from their homes.

The original St Mary’s closed in the early 1970s with the opening of a new chapel on higher ground close by. A memorial stands on the grounds of the old chapel in honour of those who perished in the flood. A mass is offered every year for those that died as Gweedore will never forget the great flood of 1880.