Kathleen Maloney recounts her visit to Dingle in Co Kerry and her encounter with its most popular resident, Fungie the Dolphin. 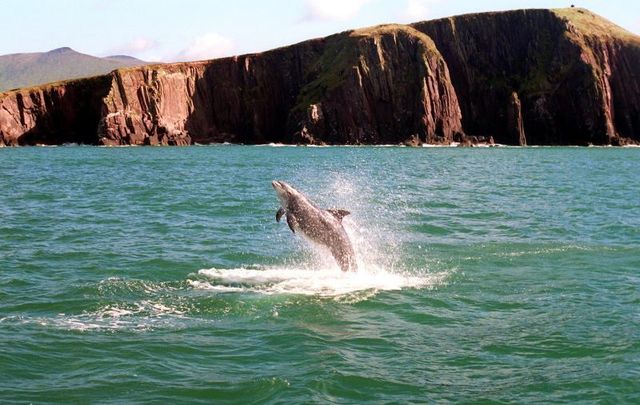 Did you know that you can go dolphin watching in Ireland? Enjoy these images and videos of the most famous Irish dolphin, Fungie.

*Editor's Note: IrishCentral is re-sharing this article in the wake of the sad news that Fungie the Dolphin has not been seen for days and is feared dead.

Dingle is one of the most picturesque places I've visited in Ireland. It's a small port town on southwest Ireland’s Dingle Peninsula.

There are ancient ruins scattered throughout the land and in the quaint town of Dingle, many pubs remain untouched from years gone by. Some pubs even double as shops. 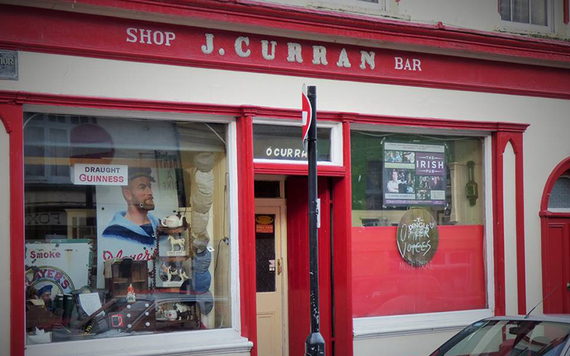 The pubs are lively in the evening and you can sing along at a trad session while enjoying a Guinness. In fact, you'll be encouraged to. There's also a brewery in town at the site of the old Dingle Creamery.

I enjoyed looking at the fishing boats in the harbor and if you like fresh seafood, well this is the town for you.

Slea Head Drive and a ride along Connor Pass are both stunning and not to be missed.

With all Dingle has to offer, I have to admit the first time I visited Dingle I didn't come for the seafood, the adorable town, the Guinness or the magnificent views.

I came to see Fungie the dolphin, their most famous resident.

I did swim with dolphins in Mexico a few years back and the truth is, I felt bad about it afterward. Sure, it was terrific coming face to face with a dolphin but they are in an enclosure and as an animal lover I can't bear to think about how they were captured. It must be torturous living in a small pool and looking out at a vast ocean that you can't get to.

As I drove from Dublin to Dingle I looked forward to seeing a dolphin swimming in its natural habitat. 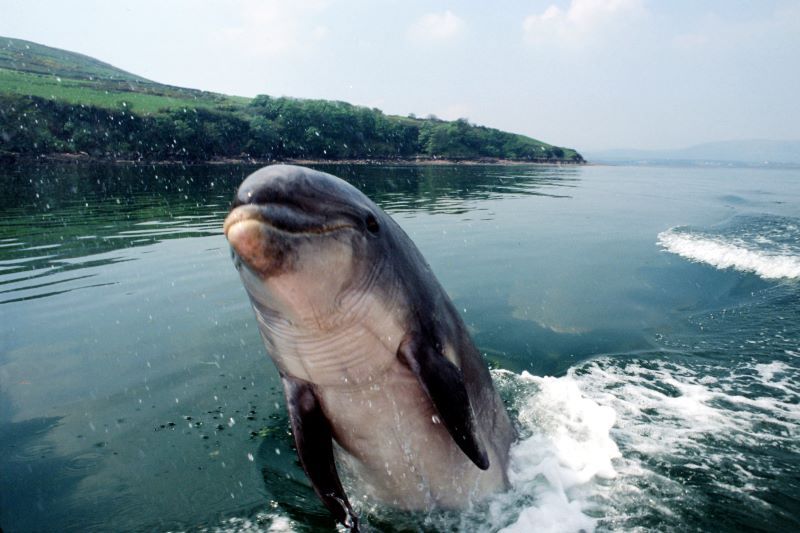 Fungie is a fully grown, middle-aged, common male bottlenose dolphin. He was first seen in the harbor by a local lighthouse keeper in 1983. There has been speculation he was orphaned there and he may feel secure in the sheltered harbor.

Dolphins are highly intelligent and they usually travel in pods but Fungie seems to prefer human companionship. He is known to interact playfully with swimmers, divers, kayakers, and surfers. He actually seeks out human interaction and has never been aggressive with anyone. His behavior just isn't consistent with other dolphins in the wild. He spends his day swimming with the local boats many carrying tourists.

The average lifespan of a common bottlenose dolphin is upwards to 48 years in the wild. Fungie has been in Dingle Bay for 34 years.

No one really knows how he got there or why he stays but the tourism industry in Dingle is sure happy he decided to call Dingle home. Fungie spawned an entire industry in Dingle and they even built a statue in town in his honor. Boats operate daily carrying passengers to see him. Around the town, you can also purchase photographs, books, and other souvenirs of Fungie. 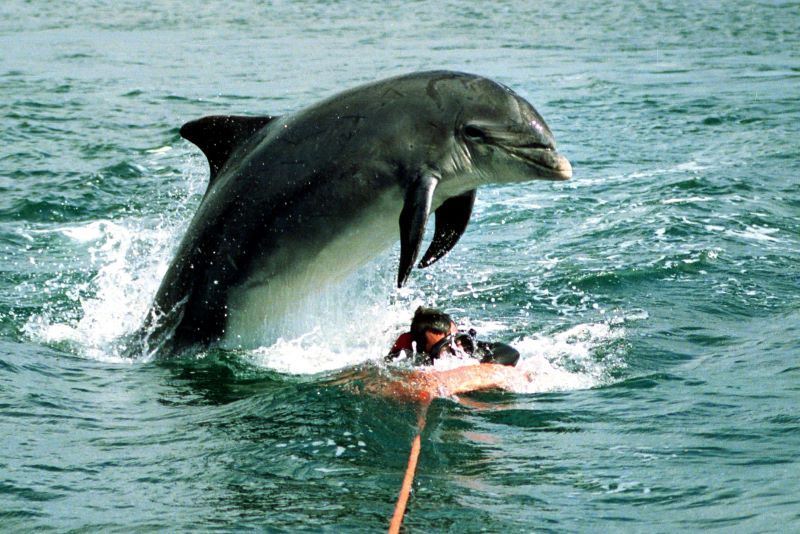 As I boarded the boat to go and catch a glimpse of the main attraction I must admit I was skeptical I would see him at all. He's a wild dolphin and you really can't predict when and where he will pop up. But the boat captain assured me he would refund my money if I didn't see him. Those are pretty good odds.

As I searched the water for him my skepticism increased. The waters were calm and I didn't see a dolphin fin anywhere in sight.

Suddenly the captain of the boat poked his head from the small window on the boat and he began to call for Fungie as you would call a dog. I honestly thought he was just placating me. 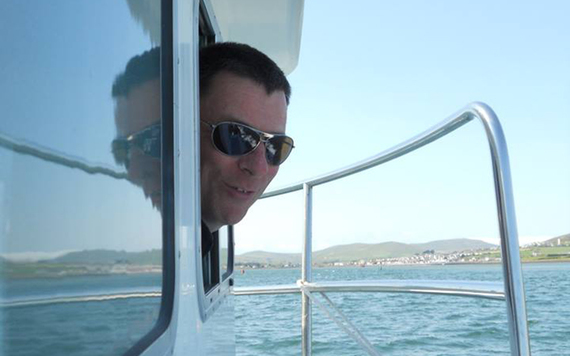 The captain of the boat poked his head out the window and called Fungie...he came!

But then suddenly Fungie jumped from the water and began to swim and bounce in the waves alongside our boat. He seemed genuinely happy to see the boat captain. He began to make squealing sounds which reminded me of a giggling child.

There were six tourists on the boat with me visiting from Japan. I attempted to converse with them earlier but they didn't speak a word of English. Yet when Fungie first appeared the girls jumped up and down and howled with delight, "Fungie! Fungie!" They ran all around the boat as Fungie swam around us. They were as happy to see him as I was. 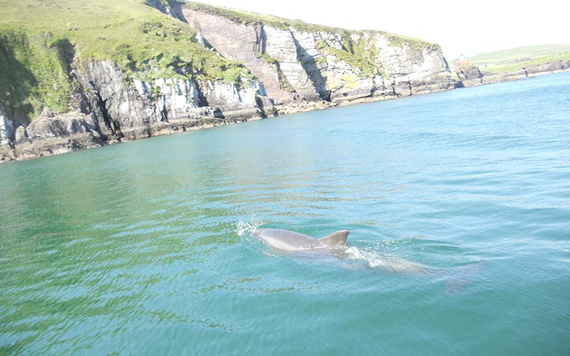 It appeared that Fungie came when called, like he was greeting friends.

The next day I was returning from the Blasket Islands on a ferry when I spotted Fungie again. It was late in the afternoon and all of the boats carrying tourists were back in the harbor. The water was so still and the sun was beginning to set. This time Fungie wasn't being playful or jumping from the water at all. He was gently swimming in a dinghy as a local couple sat in the small boat sweetly talking to him. It was evident he was very comfortable around them. They had a bond. 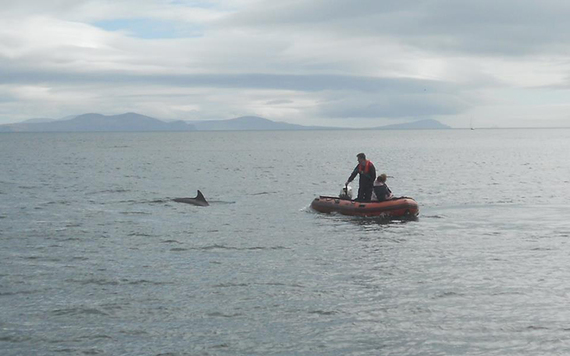 Fungie swims gently around locals in a dinghy.

As the ferry passed by their dinghy Fungie appeared to be communicating with them as they smiled and laughed. It was a very loving and tender scene. It left me feeling happy he is so loved and looked after by the locals.

It's easy to see how one solitary dolphin could capture the hearts of so many people around the world. Even as far away as Japan.

Fungie is a corker. He seemed like a fun loving, carefree and happy fellow - very much like the local Irish lads I'd met in the pub in Dingle town the night before. 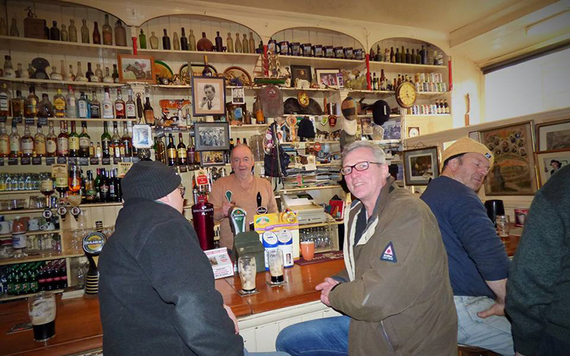 Enjoying the lively company and warmth of Dingle.

After spending a few days in Dingle and seeing the incredible beauty of its shores and experiencing the friendliness of the locals there, I packed up my car and headed north to Dublin. As I took one last look back over Dingle Bay I could easily understand why Fungie hasn't left.

I didn't want to leave either.

*Kathleen Maloney is the author of "Twice Lost," a memoir about what happened to her husband and how finding her roots in Ireland after his death helped her to heal. Learn more on her website. You can also follow Kathleen on Facebook at Kathleen's Ireland