Fungie the Dolphin has been entertaining tourists in Dingle for the past 37 years. 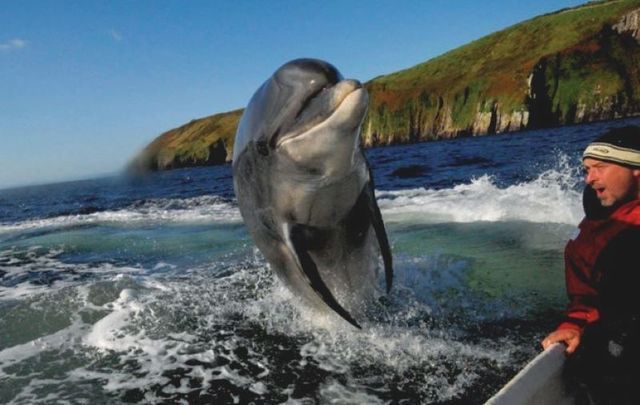 A Dingle boat tour company has called off its search for iconic Irish dolphin Fungie, who has now been missing for six days.

Dingle Sea Safari issued a heartbreaking statement on Sunday confirming that they were calling off the search after extensively searching Dingle Harbor and Dingle bay for the missing dolphin.

"Unfortunately, we have no news about Fungie's whereabouts," Dingle Sea Safari said on Instagram.

"At this stage, we are calling off the search in the hope that Fungie has just gone off on an adventure and, if he so chooses, will one day return to us."

The post thanked the Mallow Search and Rescue team for taking part in the extensive search and emotionally thanked Fungie for his company over the last 37 years.

"Wherever you are my friend, I hope that you are safe and happy and thank you for all the years of joy you have brought to so many people."

Meanwhile, Dingle Dolphin Tours promised to keep looking for Fungie on Monday but said that there had been no sightings since searches began.

The page also thanked the Mallow Search and Rescue team for their efforts during the search.

"We want to give Philip and the team at mallow search and rescue a big thank you for all their help in the search today. They were amazing," the page said on Sunday night.

"We didn’t find him but that gives us hope he is out and about somewhere. We will carry on the search tomorrow."

Unfortunately after another day of searching for Fungie yesterday we have nothing new to report.
We want to thank the team at mallow search and rescue for all their help.
We didn’t find him but that gives us hope he is out and about somewhere.
We will carry on the search today.🐬

"There’s no doubt about it, this is totally out of character for him," Flannery told Newstalk on Monday morning.

"I’m doing this for the last 33 years and in all that time he has never disappeared for this length of time, so it is very worrying."

Local boatmen and fishermen have been searching for Fungie since he disappeared last Tuesday and fears were initially eased when one fisherman said that he was "1000% certain" that Fungie swam alongside his boat.

However, there have been no further sightings of the famous dolphin, renewing fears of Fungie's demise.