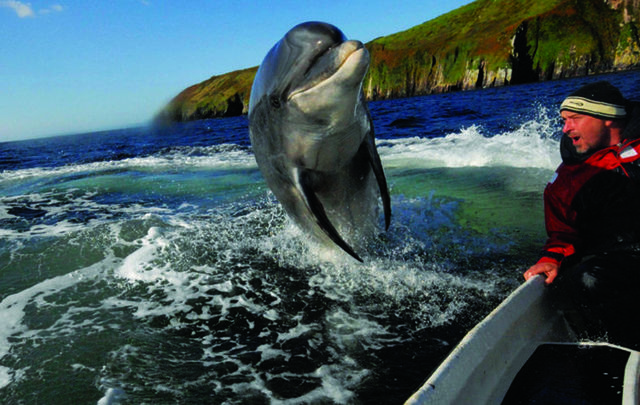 Fungie the dolphin has been hurt by recent ex-hurricane, Storm Ophelia. Tourism Ireland

Fungie the dolphin, a favorite tourist attraction who lives just off Dingle, in County Kerry, suffered serious injuries during Storm Ophelia on Monday.

The bottlenose dolphin, who has remained in the area of Kerry for generations, suffered injuries including two gashes to his head. “Fungie Forever”, a group dedicated to the dolphin updated their Facebook page after the major storm on Monday, October 16.

Poor Fungie the dolphin has some pretty sore cuts on his head.

“You might say he has a few more beauty marks now.

“Two cuts – but they do not look too serious and we know how fast dolphin skin heals, so we are quite positive this will just leave some scars.

“Fungie is fine,” they said.

The photos were taken by Jeannine Massei and her husband Rudi Schamhart.

17Th Oct.. The day after Ophelia.... A exceptional wonderful sunny and calm day.. But Ophelia left a a few 'marks' on...

Posted by Fungie Forever Photo's of the Dingle Dolphin on Tuesday, 17 October 2017

Thankfully, dolphin skin constantly flakes and peels as new skin cells replace old cells. In fact, they can be replaced every two hours which is nine times faster than in humans. Fungie will be on the mend in no time.

His new scars will also make Fungie identifiable. For years some disbelievers have thought that perhaps “Fungie” is a series of different dolphins who happen to pass through the same area. Why?

Because Fungie has been showing up in Dingle, County Kerry, for 34 years!

Fungie first graced the Kerry town with his presence in 1983 and has been showing up regularly ever since.

What disbelievers might not understand is that dolphins can live up to 48 years so why Fungie’s heading into old age he has a couple of good years in him yet.