“The people of Ireland looked after me… They were supportive and loving and they welcomed me home like an old friend.” 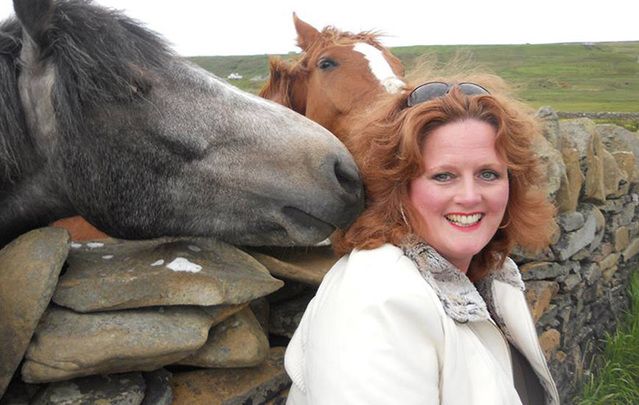 Americans often asked me, "What is it about Ireland that makes you love it so much?" I always respond, "It's the people."

Yes, Ireland is gloriously beautiful. So beautiful it will take your breath away as it has mine, many times. The scenery is graceful and grand. But when you return home after a visit, it's the people you'll remember the most. The people of Ireland are the warmest and friendliest people in the world. They are also very comical.  They usually don't take themselves too seriously and there is something very endearing about that.

The first time I visited Ireland was four years ago. I was standing in line at Shannon Airport waiting to clear customs when an officer pointed to me and motioned for me to step out of the line and come over to his station. "Me?" He waved me over, "Yes, you."

He sweetly said, "Welcome Home." I thanked him and handed him my passport. When he heard my New York accent he looked at my passport, "You're an American?" "I told him, "I am." He laughed and told me to get back on the other line - he thought I was Irish and returning home. We laughed about it and I remember feeling proud that he recognized my Irishness. After all, while growing up my father always told me I had the map of Ireland on my face.

While some plan their trip for months or years, very little planning went into my first trip to Ireland. My husband died months earlier and I was brokenhearted. While I'm usually a happy and upbeat person, after he died, I'd lost my joy. Nothing made me happy. I went through the motions of life and kept telling myself I was fine. I'd set a timeline of one year to grieve. But of course, that's not how grief works. In fact, his death seemed to drudge up even more grief I had since my mother, father and sister had passed. I was mourning all of them now. 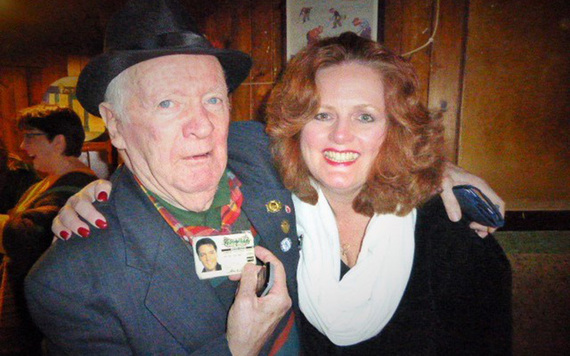 Kathy Maloney and a local man from Westport.

I took my niece with me on that first trip and it felt so good to laugh again. It's impossible to feel sad when you're in a pub in Dublin. Between the music and the interaction with the local people - you will be entertained. A few months later I returned with my daughter and we went to Dingle to see Fungie the dolphin. Then we took the ferry to The Great Blasket Islands. We were well received by the donkeys on the island and we sat for two hours as they circled around us. We laughed and we wondered if they would toss us off the cliff. After digging out some leftover snacks, we quickly made friends with the donkeys. We watched the seals below us bathe in the sunlight. There was such a peacefulness about being there that day.

Ruins on The Great Blasket Islands.

I returned with a dear friend and thoroughly enjoyed listening to Moses, our tour guide from Killarney, as he lead us through The Gap of Dunloe and talked about the history of Ireland. As I was thinking how his name and stories were familiar to me, he told me he was my tour guide months earlier as I toured The Ring of Kerry. He patiently answered all my questions and I had many. We spoke about our families and I'd felt as though I was catching up with an old friend.

That afternoon my friend and I got into a minor fender bender in County Kerry. I ran into the local butcher shop to see who owned the car we'd just swiped. As we apologized to the older woman, she took my hand and told me it was fine and not to worry about it. She even blessed me and wished me a safe journey. The butcher kept thanking us for stopping. Back in the car I looked over towards my friend and said, "Well, they sure took that well."

I've also traveled to Ireland alone during the last four years and I’ve always felt safe. I'm not one for a tour bus, so my last trip I rented a car in Dublin and drove to Belfast where I went on a political tour. I was mesmerized as my friendly guide took me to all the places my beloved father told me about growing up. When my guide handed me a black marker and told me to sign the peace wall - I proudly wrote my father's name on the wall.

I went to Derry and The Giant Causeway. I drove to the famous Carrick-a-Rede rope bridge in County Antrim and was so surprised when I suddenly felt some panic about crossing the bridge. I tried three times and I was embarrassed each time I walked back to the side I started from. A worker approached me and asked what was wrong. I explained while I was never afraid of heights before there was something about the rope bridge swinging 98 feet above the rocks below that was making me terrified to cross it. He calmly took both of my hands and walked the entire length of the bridge backward as he repeated to me, "Kathleen, you didn't come all this way to turn back now." He was right and with his help, I crossed that bridge.

I drove through Portrush and Portstewart which were both lovely towns. I've always heard how stunning Donegal is and I'd have to agree. I thought Slieve League was even more spectacular than The Cliffs of Moher, if that's possible. And, it was a lot less crowded. Each time I got out of the car in Donegal I stopped for a moment to put my hand on my heart and just took it all in. As I struggled with my luggage one day while exiting a hotel in Donegal, a boy about four years old with red hair and freckles, jumped out of his seat next to his parents and opened the door for me. I smiled at him as I told him what a little gentleman he was.

One night in a pub in Westport, a member of the band asked my name as I was on my way to the ladies’ room. As I exited the bathroom he led the entire bar as they sang "I'll Take You Home Again, Kathleen." What a welcome! Each time I got into a cab and the driver asked my name they also broke into the chorus of the same song. I remember each conversation I've had with cab drivers in Ireland and we always end up talking about my Irish-American father who passed away in 2001. I've always appreciated their genuine interest in my father and his story.

Two years ago, I came close to moving to Ireland, but life got in the way and while I still hope to do that one day, I've put that dream on hold for now.

In four years, I've visited 26 counties in Ireland. Each one is unique and special. Each county is more beautiful than the next. But it's been the warmth and kindness of the people that captured my heart.

On the last day of my most recent trip while having dinner a waitress asked me, "Are you looked after? Are you cared for?" I smiled and told her I was. It completely summed up how I was feeling. The people of Ireland looked after me and cared for me as I traveled through the past few years. They were gentle and kind to me when I needed it the most. They were supportive and loving and they welcomed me home like an old friend.

Thank you Ireland - you've helped to heal my broken heart.

Yes, I'll be back again to see the other six counties.