The Coronavirus cannot be vilified, as President Trump fails to lead and scripts his own demise, America braces itself for infection. 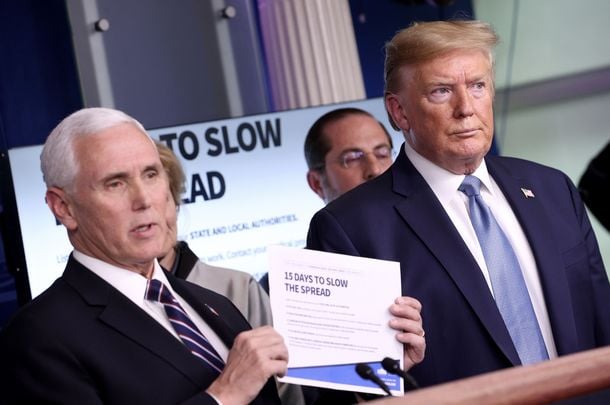 The Coronavirus cannot be vilified, as President Trump fails to lead and scripts his own demise, America braces itself for infection.

There's nothing more lonesome than a pub with no beer, except perhaps St. Patrick’s Day without a parade.

The New York City parade was the harbinger of spring, like the first daffodils or the clock going forward.

Alas, the year 2020 will forever be remembered as the year spring was canceled and, worse, St. Patrick’s Day null and voided as well.

Read more: US government order screening and self-quarantine for Americans arriving from Ireland and elsewhere

The swirl of bagpipes, the cadence of marching feet, the cheer and good craic in the thousands of Irish pubs was all silenced overnight.

Like a ghostly galleon the virus arrived, unseen and unbidden, leaching onto its victim, sickening most and killing some.

Future generations will wonder what it was like, the year of the plague brought about by the virus. They will learn it crept up like a thief in the night, first publicized as a strange flu out of China, then sweeping the world like a crashing wave.

The sheer intensity and weight of it crushed the human spirit at least for a while. It was a silent invader.  There was no army, merely a microbe tinier than a dot relentlessly invading or seeking to invade our bodies.

It struck us randomly, rich and poor alike, Hollywood stars, politicians, sports figures. It knew no boundaries, crossed no deserts, swam no seas, it was just THERE, suddenly making your body sick.

Like all plagues, some reacted heroically like doctors and nurses on the front lines, many giving their lives to stop the spread of infection.

Then there were the charlatans, the president who said he bore no responsibility for the dreadful initial handing of the crisis, the price gougers when folks tried to stock up, the hare-brained analysts all over TV, instant experts with no background or experience prattling away like kids in a nursery.

We will remember the steady hands, like Dr. Anthony Fauci, the leading infectious disease doctor in America, forcing the president and his administration to admit what was entirely known, that the response to the virus had been hapless and helpless and useless for the first two weeks.

All the talk about Chinese conspiracy, that it was all a left-wing plot, all the usual tropes about the traitors on the left evinced by the president and his followers has had no impact.

The virus doesn’t do politics, is immune to being vilified, doesn’t care how many fake news charges are made.  It just gets on with the job at hand, sickening and killing as many as it can, scything through countries, territories, dominions without fear or favor.

Nothing personal President Trump, but as the Irish might say it made a complete eejit out of you.

Which was bound to happen at some time in this gormless presidency. As Wall Street crashed and countries shut down and panic spread, the president was still reserving his daily spot on Twitter railing against political opponents rather than heeding his own call for unity.

“Filleann an feall ar an feallaire” runs the Irish language expression, ”the bad deed always comes back to haunt the doer.”

The doers were the American people who elected a reality TV imbecile as their president on the strength of a fictional biography and with no government experience.

Now they are sowing the harvest of that dreadful decision.

Coronavirus was going to end up in America anyway, but the president’s initial inaction has cost the country dearly.  He must be replaced in November.

How do you think Donald Trump is dealing with the COVID-19 outbreak? Let me know in the comments section below.