Taoiseach Leo Varadkar raised the issue of the undocumented Irish in the U.S. and the E3 visa bill during his meeting with President Donald Trump on Thursday. 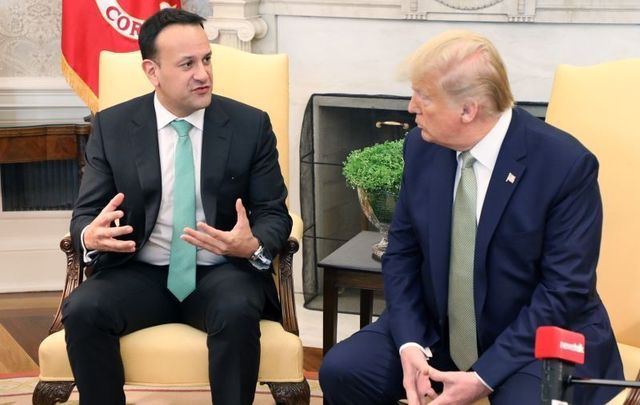 Leo Varadkar raised the issue of the undocumented Irish in the U.S. and the E3 visa bill during his meeting with President Donald Trump on Thursday.

The Taoiseach (Prime Minister) was in Washington DC on March 12 for the annual state visit ahead of St Patrick’s Day.

The leaders' meeting came just after the US House of Representatives passed a bill on March 9 that could give Irish citizens access to thousands of unused E3 working visas in the US every year. The measure will now be considered in the Senate.

When asked if Irish citizens will always be welcome in the US, President Trump said: “Always, always. Just like your Prime Minister (Taoiseach). They will not only be welcomed – loved. We have millions (of Irish citizens). It changes every year. I think it’s actually bigger now.”

Varadkar said there are more than 35 million Americans who claim Irish heritage, to which the president replied: “It’s got to be one of our biggest. We love the Irish.”

When questioned on whether he will discuss the inclusion of Irish citizens in the E3 visa bill, Trump said: “We are going to be looking at that, we are gonna (sic) be talking about that today. It’s a very important part of our conversation today.”

Speaking later, Varadkar said Trump has “committed once again to assisting us” over the E-3 visa issue.

“Seeing if he can use his influence on Senator Blunt and Senator Cotton to see if we can get that through in the next couple of days which would be great, but we are more or less where we were this time last year on that, but hopefully we can have some progress too,” Varadkar said.

The two leaders, who did not shake hands at the meeting due to the threat of the coronavirus,  also discussed the global viral pandemic.

Trump, who appeared to confuse Ireland and the UK, said the reason the UK was not included in the travel ban announced last week was due to its strong borders.

“It has got very strong borders and they are doing a very good job,” he said.

“They don’t have very much infection at this point and hopefully they will keep it that way.”

Read More: Does Trump think Ireland is in the United Kingdom?

Varadkar added that one of the reasons Ireland was exempted from the ban was the presence of US border security in Ireland.

“Just saying that the President has excluded Ireland from the travel ban. And one of the things that we have in Ireland is CBP, American border security, in Ireland. I went through it myself yesterday, and they were asking the right questions — whether people had been to China, things like that. So that puts us slightly in a different position.”

Later, Varadkar was the guest of honor at the annual Friends of Ireland lunch at the Capitol, which the president did not attend this year.