So since last weekend, we're on lockdown here.  It's very strange for everyone and very difficult for some people, but the general feeling is that as long as you stay healthy it could be a lot worse. 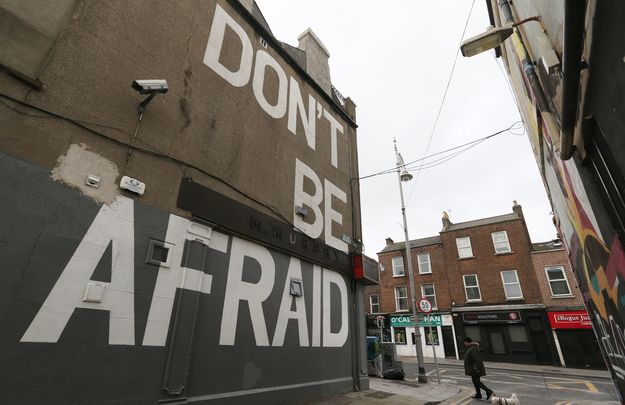 So since last weekend, we're on lockdown here.  It's very strange for everyone and very difficult for some people, but the general feeling is that as long as you stay healthy it could be a lot worse.

Dublin: Announcing the escalated restrictions on Friday evening, Taoiseach Leo Varadkar did not use the word lockdown.  It's not a word he likes to use, he said, because it can mean different things to different people.  He said he prefers to be precise in his language so that everyone knows exactly what they are expected to do.

You are probably aware of the main points by now:

- Everyone to stay at home for two weeks (and that may be extended).

- People only to leave home to shop for food, household items, medicines or to assist the vulnerable.

- Only people who work in essential services, supermarkets, pharmacies, etc. allowed to travel.

- Going out for brief physical exercise allowed but it must be within 2 kilometers (just over a mile) of home.

- Social distancing of two meters (over six feet) to be observed at all times outside the home.

- Groups of people outside forbidden, unless members of the same family out for exercise.

- Over 70s and those with pre-existing conditions that make them vulnerable forbidden to leave home for any reason (called "cocooning").

This new regime is in addition to the other measures already announced to do with social distance, washing hands, coughing rules, self-isolation if you feel you have symptoms, etc. 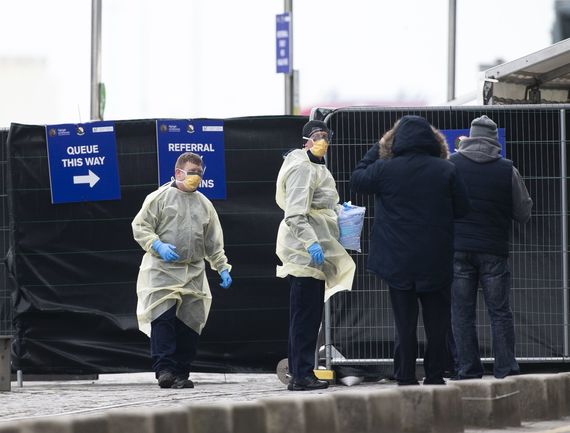 It's not a total lockdown but it's close and similar to what is now happening in New York.  A total lockdown would mirror what we saw in cities in China where people were ordered to stay indoors 24/7 and that was enforced for weeks by the police and the army.

Or it would be closer to the measures imposed in Italy and Spain in the last two weeks.  Like many people here I have siblings abroad, including a sister who lives in Spain.  She's a teacher and lives alone in an apartment block which she is forbidden to leave without the required paperwork.  In the past week, she has been outside just once, to go shopping for supplies.

That's a real lockdown and it could happen here yet, depending on how successful the restrictions are in containing the spread of the virus.  We don't know that yet but there is some hope because the number of cases here is well below what had been predicted for this stage of the pandemic.  This may be a result of the earlier rules we imposed, and the new tighter restrictions should bolster that.

Even so, there is no room for complacency and the authorities here are preparing for a sharp rise in cases, with more coronavirus beds, ICU facilities and so on being prepared.   The government, the health service, and the public are hoping and praying that the new restrictions will mean we can avoid a disastrous spike in cases that would overwhelm the hospitals in the next few weeks.  But it's far from certain.

There are notable differences between what is happening here and in the U.S.  In particular, all decisions here are being taken by the chief medical officer and his pandemic team, and Varadkar and his ministers always refer to this when announcing measures and strategy.  This has given a level of trust and confidence to the public who feel that those in charge are all on the same page and know what they are doing.

Read more: Heartbroken Irishman unable to say last goodbye to wife of 51 years due to COVID-19

Watching the news from America one gets the impression that is not the case over there, with President Trump giving mixed messages and saying foolish things that have to be walked back by his senior medical officials.  It's not a sight that inspires confidence.

In contrast, Varadkar has been impressive, calm and measured, limiting his national addresses on TV to critical moments in the battle and leaving the day to day updates to the expert medical team.  As a consequence, his standing in the polls has soared, making Fine Gael the most popular party again despite their poor showing in the recent election.  Many of the people who voted for "change" in the election are now desperate for stability and proven competence. 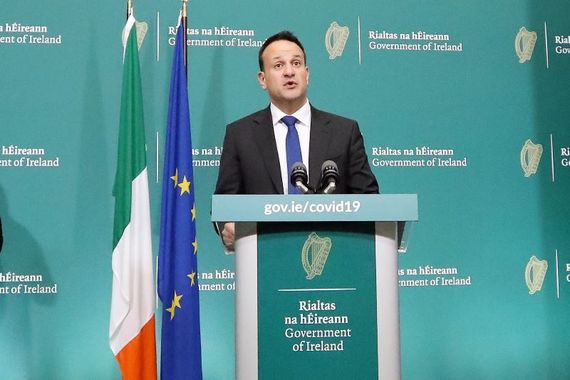 Irish Leader Leo Varadkar has been internationally praised for how he's dealt with the outbreak.

That is not to say that we have got everything right here.  We continued to allow flights from the north of Italy after it was clear they should have been stopped, for example.  We were not as fast as we might have been in imposing the tougher stay-at-home restrictions.

And our under-spending on ICU resources over the years has now been exposed.  We have fewer ICU beds per head of the population than most other EU countries.

But our response to the crisis has been coherent and the authorities have been impressive in the way they are racing to make up for the shortcomings.  Above all, we have managed to get the public on board with what has to be done.

That is vital because even though we have new legislation to enforce the restrictions, we only have 15,000 gardai in the country to do so.  Without broad public support, it won't work.

Of course, it will be difficult for many people here, particularly those with young kids.  It's okay if you have enough resources and your own garden or yard out the back.  For those cooped up in apartments, it's a different story.

To be fair to Trump, he has now moved in the right direction even if he has been painfully slow in doing so.  He was right to promptly close off traffic from China, but he then lost weeks by refusing to accept that the U.S. was in grave danger.  This was a vital time he should have used to prepare for what was on the way. 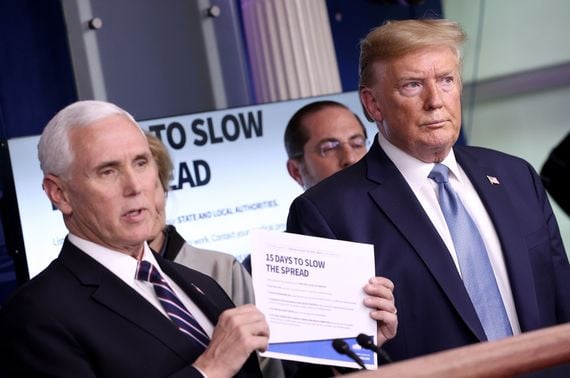 Combined with his dithering and confused messaging, it has left the U.S. badly exposed.  Instead of saying stupid things like wanting to open up activity again at Easter, he should have been advocating a strict stay-at-home policy several weeks ago in New York and other crisis areas.

Because of the delay, a total lockdown may be necessary for cities across the U.S. by the time you read this.  Trump should have been building a consensus with governors and mayors across the country on this, but instead, he wasted time posturing and waffling and now faces a country that is fearful and divided.

Having said that, the media in the U.S. and the Democrats are not blameless either.  Instead of exploiting the situation to try to catch Trump out at every opportunity, they should have been trying to steer him in the right direction.  The situation is much too serious for gotcha questions at press conferences, no matter how much anyone hates Trump.

Also disappointing were the media accusations of racism when the president called the pandemic "the Chinese virus."   It was not the most articulate way of putting it, but he is right.

The fact is the virus originated in China and the Chinese deserve to be called out on their disgraceful behavior not just by Trump but by the rest of the world.  Their failure and duplicity are likely to cause hundreds of thousands of deaths in the U.S. and millions around the world.

It's not the first time either.  The deadly Sars virus in 2003 also originated in China in one of the notorious "wet markets" where they sell all kinds of live wildlife -- animals, birds, snakes, bats, etc. -- piled up in small cages in unhygienic surroundings.   Various coronaviruses are common in wildlife, particularly bats, and the appalling conditions in these markets make it easier for them to transfer into animals which are then bought, killed and eaten by the Chinese.   Occasionally one of these viruses, like Sars and this new one, Covid 19, then makes the jump into humans.

The Chinese have known this for years but did nothing to close these filthy and deadly markets, even after the Sars outbreak. What happened this time was outrageous. 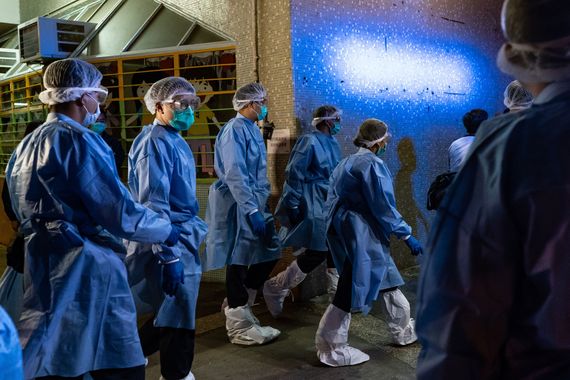 First responders during the Chinese outbreak.

When a few cases of the new virus emerged in Wuhan early in December it was ignored.  When this quickly expanded into dozens of cases it was hushed up, and doctors who spoke out were arrested for spreading lies.

Travel from Wuhan, a city of over 10 million, was not closed down until the end of January after the Chinese New Year had begun.  By then at least a million people had traveled out of the city, beginning a spread that has now gone around the world and threatens countless lives.

Have the Chinese owned up to this and begged the word's forgiveness?  Of course not. Instead, they have suggested the virus might have come from the U.S. and they are posing as the word's saviors by flying aid into Italy and other affected areas.

It's enough to make you sick.  That's if this deadly virus does not kill you first.