A retired civil servant from County Fermanagh last saw his wife alive last Monday when she complained of severe pains. 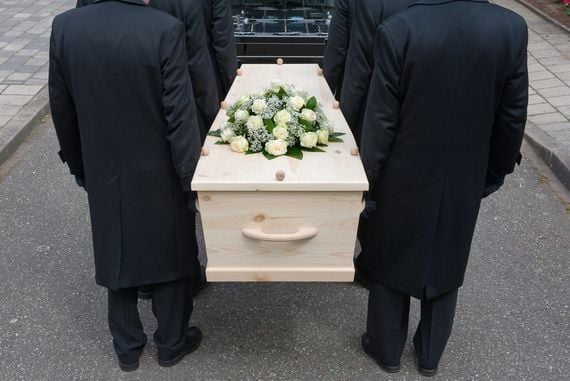 An Irishman told the heartbreaking tale of saying goodbye to his wife of 51 years as she was rushed to hospital in an ambulance with suspected COVID-19 and never seeing her again.

His wife Anne was taken to Enniskillen's South West Acute Hospital under the advice of Dr. Michelle McBrien, the couple's doctor.

Her age, coupled with the fact that she had an underlying health condition, meant that she was at risk if she contracted Coronavirus.

She died a day later without seeing her husband again.

Anne Best was buried on Saturday and, again, her husband was unable to see her.

Tom Best has been told to self-isolate for 14 days because he had been in direct contact with his wife before she was taken to hospital.

It meant that he couldn't attend Saturday's funeral and say goodbye to his soulmate of more than 50 years.

In truth, there was no funeral. To comply with social distancing guidelines, a handful of mourners watched from afar as undertakers lowed Anne Best's coffin into her grave. Her coffin bore a single white rose.

It highlights how COVID-19 is wreaking havoc on every facet of Irish life, including some of the most integral parts like a loved one's dying breath and the chance to say goodbye to them.

He offered to do the interview to "make people take notice" of the COVID-19 crisis and the impact it has.

For Tom Best, going break self-isolation and going to his wife's burial was out of the question.

“I am not going to break all the rules and walk up there and see her. I’m not going to do that because that would not be right; it would be selfish on all the people of Derrylin."

The widowed husband spoke of the trauma and the anguish of not being able to see his wife in hospital. He said that he fell apart when a doctor told him his wife would not make a recovery over the phone.

“I got a call on the Wednesday night explaining that things were not looking good. I’ve been around a lot of death over the years and I can put two and two together. When it comes to your own door, you just fall apart and that is a fact.

“I told the doctor whatever you are doing, you are doing your best. Then he said the next call will be the one to tell me she was gone. ‘You can be expecting it’ he said,” Best explained.

The 77-year-old said that he has not witnessed a crisis like the Coronavirus pandemic in his lifetime. He said that he wouldn't wish what he went through on anyone.

“It’s heartbreaking, it’s heartbreaking. I wouldn’t wish it on anyone, that is a fact. Maybe some good will come out of it. It is unimaginable, I don’t think we have ever faced anything like this in our time, in my 77 years anyhow."

Summing up his loss, Best said that he would miss the simple things he had with his wife.

“You might wonder why I wanted to cook her breakfast and do things for her,” he said.

"I loved her," he concluded.