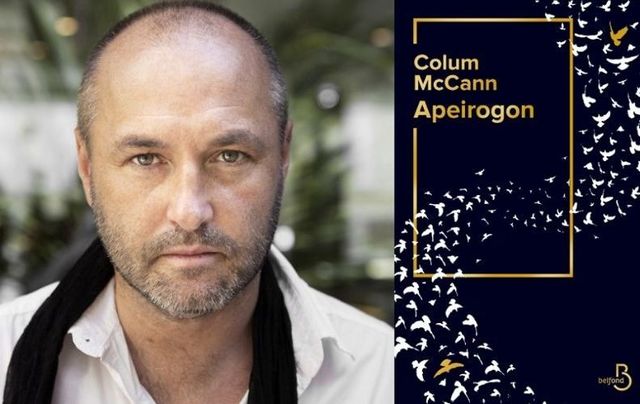 I was delighted I got a seat to hear Colum McCann interviewed by fellow writer and friend, Darragh McKeon. The conversation was screened live via Zoom in the Centre Culturel Irlandais (CCI) in a half-empty lecture room to respect Covid restrictions.

"Apeirogon," McCann's latest novel (Belfond), is a powerful voice for peace and hope and one of the most acclaimed novels of this literary season. His six other novels include “TransAtlantic” (2013) and the National Book Award-winning “Let the Great World Spin” (2009).

McCann had originally planned to visit Paris to mark the launch of the French translation of "Apeirogon." However, the Zoom triangle between McCann’s 86th Street New York City apartment, McKeon’s stone cottage in West Clare, and the CCI in Paris was somehow extremely personal. The three locations also mirrored cultural triangulations in "Apeirogon."

In the book, McCann plunges us into the heart of the tragic Israeli-Palestinian conflict through the testimony of two real-life characters who lost their daughters to violence in their homeland. The devastated friends, Rami Elhanan, 70, an Israeli graphic designer, and Bassam Aramin, 52, a Palestinian academic, now travel the world together telling their stories, initiating dialogue, and calling for peace.

McCann is not only a literary genius when it comes to helping people move forward. As Co-Founder of “Narrative 4,” an association which created story exchanges for students, he helps them see that their voices can bring change. Showing people, how it feels to step into another’s shoes, also parallels Rami and Bassam’s work.

As we listened to two of Ireland's finest writers discuss their lives, how they started out, and their writing processes with such candor, I hoped there were budding writers in the audience.

McKeon, 41, who also enjoyed a career as a theatre director, felt he had been held back for many years, and had been looking for “permission to be a writer." His debut novel, “All that is Solid Melts into Air” (2014, Belfond) was shortlisted for the “Newcomer of the Year award”. McCann commented, “it was a debut to rattle all the windows and open up the ventricles of the heart.…McKeon is here to stay.”

The two men are visibly intertwined; McCann was McKeon’s teacher before they became fast friends and they are mutual alpha readers. After McKeon read “The Dancer,” McCann’s 2003 fictionalization of the life of Rudolph Nureyev, he felt Irish literature had been changed forever. The novel stepped outside Ireland, ranging time periods, continents, and territories. McKeon steered his own debut novel to Russia, using the Chernobyl disaster as a backdrop.

McCann, also devoid of literary snobbery, confided “writers are no way nearly as intelligent as readers think”. At the beginning of "Apeirogon," a hybrid work with invention at its core, he orchestrates an ambiance of confusion, unfolding “a work of storytelling which weaves together elements of speculation, memory, fact, and imagination.” The reader at times emerges as the narrator. His literary innovations will be named and taught to future generations of students. The two writers fascinated as they generously shared; McCann’s lucky students in Hunter College, New-York, must sit on the edge of their seats.

McCann’s father Sean was a writer and a features editor for the “Irish Press," and was known for having a great love of writing and for writers. The young McCann witnessed writers like Brendan Behan knocking on his front door and his father proffering “tenners” in advance money. His father also wrote children’s books - when "Goals for Glory," his soccer novel, was read out in his classroom, McCann witnessed the excitement of his school friends and realized the power of fiction.

However, McCann doesn’t see “much difference between good journalism, poetry or prose." Nonetheless, growing up around newspapers had an impact. He started work at 12 telephoning in 200-word soccer match commentaries to the Irish dailies. He became a cub sports reporter at “The Connaught Telegraph,” Castlebar often playing in the very matches he wrote about!

However, his next step in journalism, in the early ’80s, took him from his home in Deans Grange to cover the heroin epidemic in less privileged areas of Dublin. His investigative report was an award-winning one. He also found out that he enjoyed when there was a certain element of danger lurking around the corner.

McCann, mentor for McKeon, also enjoyed having a mentor of his own - Ben Kiely (1919 –2007), famous Irish writer and broadcaster. Kiely told the 16-year-old McCann he had what it took to become a writer. McMann also appreciated his secondary school teachers and can remember the pride when called to read out an essay. He said he wrote others that weren’t good and he is relieved publishers rejected the novel he wrote at 23 as it was “shite”! However, writing it was great training. Lucky for us, he wasn’t discouraged and went on to become the award-winning writer and entertaining empathic interviewee we witnessed.

It was a truly wonderful unusual evening, being in close Zoom company of such a fun and brilliant pair and bearing witness to the respect these men treat each other, their readers, and their audience with. They both acknowledged the talent of young Irish writers, especially young Irish women writers. Nora Hickey M'Sichili, CCI Director, was a fantastic moderator and as fact-checker for the Enniskillen based pages of McKeon’s new novel, was thoroughly implicated.

Departing the CCI, in the moonlit courtyard, I spotted a young man with the stance of McCann’s Nureyev. Was it Fearghus O Conchúir, choreographer and dancer in CCI cultural residency? He was chatting with fellow residencies or students; like McCann and McKeon before them (both spent time in the CCI) all ready to take that quantum leap into other lives and cultures. McCann maintains that the Irish have “a unique magic which allows us to get into other people’s experiences, and to go in with humility and learn”. Perhaps that’s another reason why the Irish diaspora does well wherever they go?

With Paris’s Covid alert at maximum, the city’s bars were shut from 6 October, and with the specter of another lockdown, I’m delighted I have "Apeirogon" to curl up with. We’re also waiting with bated breath for “Remembrance Sunday,” McKeon’s new novel.

Readers, like the birds on the cover of "Apeirogon", need the flights and sanctuary our writers provide now, even more than ever…