The first Pope was married - it's time for the Catholic Church to move forward by going back. This was not always the "status quo." 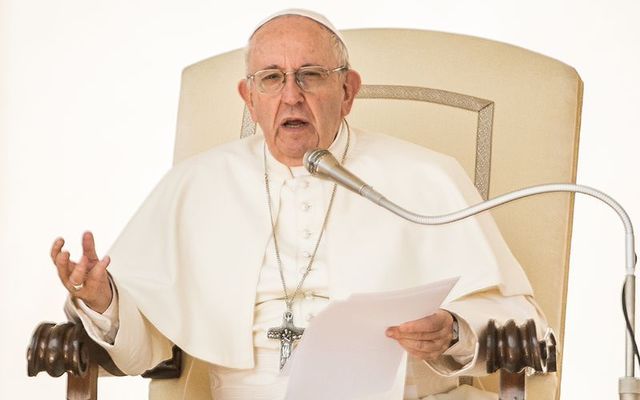 Pope Francis has asked the Catholic Church Synod to be open to priests marrying. Getty

The first Pope was married - it's time for the Catholic Church to move forward by going back. This was not always the "status quo".

Of one thing we are clear—the first Pope, Peter, was married.

The three Synoptic Gospels recount how Peter's mother-in-law was healed by Jesus at their home in Capernaum (Matthew 8:14–17, Mark 1:29–31, Luke 4:38). These passages clearly depict Peter as being married.

That’s important, especially as this bravest of popes, Pope Francis, dared to raise the question of married priests last weekend.

The center of the Catholic Church, The Vatican in Rome.

The leader of the Catholic Church told an assembly of bishops at the Vatican that, when it comes to the controversial issue of priests being allowed to marry, they must not be "smothered by the ashes of fear and concern for defending the status quo."

But plenty Catholic Church officials still are. The Pope has been accused of heresy for a perfectly good idea. American Cardinal Raymond Burke called the whole idea of the upcoming Synod a direct attack on the “lordship of Christ.” He has many fervent backers, especially in America.

The slippery slope argument holds here. Allow married men and women will demand access to the priesthood and so on.

Such arguments trivialize the seriousness of the issue. In a half-century, because of an utterly unnatural doctrine of celibacy, the Catholic Church will be clinging to life support and relevancy.

It's time for the Catholic Church to allow priests to marry.

The Vatican is keenly aware of the crisis in vocations, especially in the Western world, with only African countries showing an increase in the numbers wanting to become priests.

There is a time and a tide, and this Pope sees clearly the extent of the crisis.
In a thinly-veiled warning about complacency, Francis stated, “If everything continues as it was, if we spend our days content that ‘this is the way things have always been done,’ then the gift vanishes, smothered by the ashes of fear and concern for defending the status quo.”

Ending celibacy as a requirement will not end the vocations crisis, but it would triage it. The question of how to get the missing flock back is another problem entirely.

Francis has shown great courage and insight to begin the much-needed discussion. He is on the right side of history.

After all, Peter, a married Pope was the rock on whom the church was built. Francis clearly walks in his footsteps.

What's your opinion? Should Catholic priests be allowed to marry? Let us know in the comments section below.