A twisted family history. Fortunes made and lost. The mob. The mysterious death of an Irish American showgirl. Is this the Biden scandal that sticks? 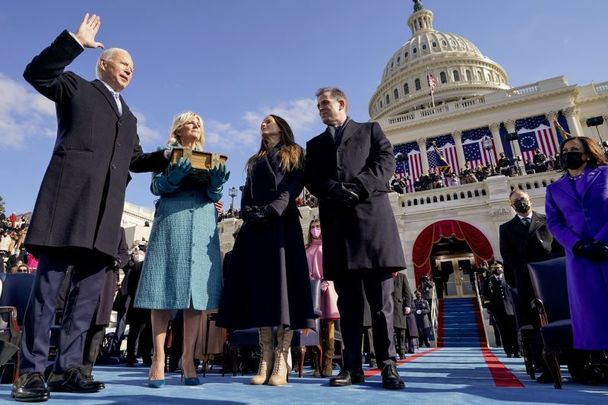 January 20, 2021: Joe Biden is sworn in as the 46th president of the United States by Chief Justice John Roberts, as Jill Biden, Ashley Biden, and Hunter Biden look on the West Front of the US Capitol on in Washington, DC. Getty Images

But gone are the days when Republicans could just whisper anything – about Hillary and her email, or Barack and his birth certificate – and it would drive the right kinds of folks the right kind of crazy.

But here in the dog days of summer, we might finally have the scandal that sticks to Uncle Joe like a $10 gallon of gas.

It’s got everything: A twisted family history, including Biden’s angry Irish uncles. Fortunes made and lost. The mob. And even the mysterious death of an even more mysterious Irish American showgirl.

If the GOP can’t use this to sink Biden, they may have to live with the fact that…well, the American people can live with Joe Biden.

“All children are shaped by their parents,” Adam Entous writes in the August 22 edition of The New Yorker magazine.

“Joe Biden draws much of his public persona – his emphasis on his Irish roots and his middle-class background, his interest in politics and in public service – from (his mother’s family) the Finnegans.”

This long article is about the lesser-known ways “Biden has been shaped by his father – a man he described, in his eulogy, as ‘a dreamer burdened with reality.’”

At the center of this article is a cousin of the president’s father called Bill Sheene, whose name had been misspelled for years as “Sheen.” What emerges is a messy, boozy trip down bad memory lane.

In the 1930s, Biden’s teenaged father watched the president’s grandfather make a bunch of money only to lose it, necessitating a move to a hardscrabble, heavily-Irish enclave in Pennsylvania.

It seems Jean’s dad had a “bit of a chip on his Irish shoulder about the Scranton elite,” as the president later noted.

Jean’s brothers, meanwhile “ridiculed Biden, Sr.,” who talked a lot about things like golf, horses, and fancy cars that no one actually ever laid eyes on.

Yet in 1941 Jean married Biden, Sr., who went into business with a “mobbed-up business partner, Arthur Briscoe,” a onetime bootlegger who also had a plan to make lots of money during World War II. Along the way all of these old timers drank way too much.

Various people alternately describe Briscoe as “charismatic” and “scary.” The details that follow lean towards the latter.

After marrying, Briscoe began another romantic “relationship with an actress in New York…who had connections to the mob.”

Her name was Marie Gaffney.

Briscoe’s first wife was soon after “scalded to death in a bathtub. There was no autopsy, and the death was declared an accident,” according to The New Yorker.

Briscoe then married his Irish American girlfriend. In fact, it was on “Gaffney’s recommendation (that Briscoe) contacted Frank Costello,” seeking the kind of help with a business matter that only the “so-called Prime Minister of the Underworld” could give.

After World War II, all of this worked out well enough for Briscoe and Gaffney – if not for the Bidens or Sheenes.

“The Sheenes sued Briscoe, alleging that he had siphoned money off their partnership,” Entous reports. But when Briscoe and Gaffney failed to show up in court, a “local sheriff visited their estate and found Briscoe lying down, ‘inebriated,’ (as well as) Gaffney, who had been dead for about a week.”

The body was “so decomposed that it was impossible to determine an anatomical cause of death.”

It’s also impossible to establish much else about Marie Gaffney’s life, because despite her mob, show biz – and now White House – connections, she is a ghost.

Perhaps her name has been spelled wrong all along.

Briscoe married yet again and lived until the 1980s. Bill Sheene III lives in an RV park in Florida.

And Joe Biden resides in Washington, DC. For now. At least until Hunter’s laptop offers up the real story about Marie Gaffney.