Irish leader Albert Reynolds was a man of vision

“By the one-hundredth anniversary of the Rising, if Ireland is not yet all green, unity will not be far away”. 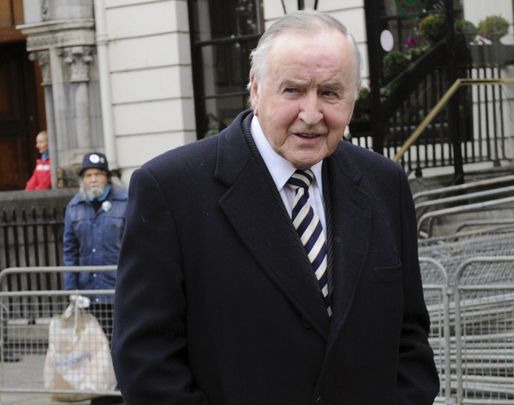 Such was the prediction of the first man from County Roscommon to hold the premier position in the Irish government.

Albert Reynolds, who began his life in the northeastern corner of the county, had risen far beyond the boundaries of his native land to become an international figure and one to whom Ireland owes an enormous debt of gratitude.

An honest voice, a personable politician, a man of his word—this was the gentleman who sat across the small glass table on the mezzanine of the Shelbourne Hotel in Dublin one wonderfully brisk summer day in 1999. Dressed in a deep blue pinstriped suit, he was all business---quoting export figures and explaining negotiating terms of the Downing Street Declaration, providing an inside look into the peace process of 1994, while passionately proclaiming Ireland’s economic progress of the last decade of the twentieth century. Mr. Reynolds was clearly a man with a vision and regret.

Born in Rooskey in 1932 to a family of three boys and one girl, his father made his living as a cabinet maker while his mother tended to the young children. After attending a national school in Carrigeen parish, he studied at Summerhill College. In the mid-1960s he and his brother Jim opened a ballroom of Cloudland near Rooskey. One business venture led to another and eventually into political life.

He was first elected to the Longford County Council in 1974 entering the Dail three years later. He served in a variety of ministerial positions:

- 1982 Minister for Industry and Energy

-  1987 Minister for Industry and Commerce

The following year, 1992, Albert Reynolds became the Fianna Fáil Taoiseach. At the apex of his political pyramid, he pointed Ireland toward reconciliation, and nudged the North and South closer to peace, nearer to unity. His signature and that of John Major, Prime Minister of England, appear on the front cover of the Downing Street Declaration issued on 15 December 1993.

Read more: Why Mary Robinson is one of Ireland’s most respected figures

When asked whom he most admired in the political arena, he quickly identified Sean Lemass as his mentor. When pressed as to which person could claim the greatest political accomplishments in recent history, Reynolds unhesitatingly pointed to Bill Clinton, the former President of the United States.

The Troubles in Northern Ireland

Neither Clinton nor Reynolds were the first to approach the North. Lemass met with the Northern Ireland Prime Minister, Terence O’Neill, in 1965, an accommodation which Unionists viewed as threatening and which eventually cost O’Neill his job. Charlie Haughey was the first Taoiseach to speak for the North, his words being reinforced with “unofficial” arms shipments across the Border. That too cost him his job.

During those years Reynolds was Minister for Posts, Telegraphs, and Transport, months in which he sought to use his position as a stepping stone. What better way to break down barriers than to listen to the other side? Truly listen─via radio, to the voice of southern neighbors. Reynolds directed that the transmitting stations of RTE be located close to the Border whereby they could beam their communication waves into the North.

Counties Derry and Donegal have always been geographically isolated from the Republic of Ireland, but during the 1970s Reynolds sought to dismantle the barricades and open up the mind’s eyes to a wider world. Under his stewardship, the Dublin government-subsidized air travel offices for those counties.

With the reins of power firmly in his hands, Reynolds had two national objectives─opening up the Irish economy so as to reverse emigration, and taking the first steps toward real peace for the island. Economically the income figures spoke volumes. The standard of living, since the Treaty, had been significantly lower in the Republic than in British-subsidized “northern” Ireland. How to erase this discrepancy? Reynolds looked to the continent for assistance. In 1992, Reynolds successfully negotiated an eight billion dollar influx from the EEU. “Northern” Ireland, on the contrary, is way down on the list of priorities for target money for the United Kingdom. Being only a small piece of the British Empire has its drawbacks. During the same time period, the North realized only one-eighth of the monies that washed ashore from the continent. For every eight pounds that ended up on the Dublin seacoast, only one pound found its way to Belfast Lough.

How did the Republic use surplus cash? Infrastructure! Anyone driving through Ireland in the third millennium would not recognize the roadways as even remotely similar to those of the early 1990s. Money for remodeling old structures and starting new businesses, interesting international companies to take advantage of Ireland’s literate workforce and open new factories, tax incentives—these were the targets of added cash; consequently, the South’s economy during the last half of the 1990s grew three times faster than that of the six northern counties.

Read more: A thanks to John Hume

Negotiating for peace proved a more difficult task for this man of vision. Both the British government and the I.R.A. were equally suspicious of each other. The Irish Republican Army has never trusted England to implement a just settlement; they have always felt that nothing could be wrung from England without physically wresting control. For their part, Downing Street did not believe that the I.R.A. would honor a ceasefire nor would Sinn Féin participate in a Stormont.

Furthermore, no single voice represented Northern Ireland. Various factions vied for attention. It was clear from the onset that certain concessions would have to be given to the Northern politicians in order for talks to begin. The South must relinquish claim to an All Ireland, and the I.R.A. must cease the gunfire. With regard to the peace initiatives, when Reynolds was seated in the Taoiseach’s chair, John Hume of the SDLP party in the North approached him and intimated that a porthole on the ship of state was ajar. The language of the I.R.A. was changing and the stellar convergence on the political horizon of international figures such as Bill Clinton, Hermut Kohl, Gerry Adams, John Hume, John Major, David Trimble and himself, Albert Reynolds, provided a unique window of opportunity which might just might, open out onto a vista of a sea peace for Ireland.

Reynolds claims that “without Bill Clinton, there would have been no cease-fire” (2). The American President sent George Mitchell to Ireland as chief intermediary between the rival parties. Mitchell acted with the full backing of the President. In addition, by issuing a visa to Gerry Adams in 1994, Clinton loosened the stranglehold on American foreign policy formerly held by the Crown and opened the way for Adams to receive international recognition for his cause.

During negotiations, Reynolds met with John Major and advised him not to push for decommissioning. Why? Because traditionally the Republicans had never surrendered their arms willingly, and the peace proposals coming out of the North offered no keen reason for them to do so now. Even after the Irish Civil War, the Anti-Treatyites did not hand over their guns to the Dublin troops but rather simply dumped them (some hoping for a better day to use them.) But rust is the premier decommissioning agent. When the wheels of justice are spinning, there is seldom a need for bombs, mortars, bullets, or sledgehammers.

In 1993 when Reynolds peered down the road of the next millennium, he beheld a woodland that encompassed all Ireland. He reasoned that partition simply doesn’t need to be. Historically there has been unity on the island for thousands of years. To fragment this Emerald Isle and color a section of it Orange is simply not a permanent fait accompli. The barriers will corrode in time, demographics will alter the election results of the Northern Parliament, and Protestants and Catholics will have to learn to trust one another.

Upbeat and positive in his view of the Irish national scene, Albert Reynolds expressed but one regret. Although his appointment to principal artist had been sudden and the Fianna Fáil canvas prepared with the appropriate brushstrokes, there had not been enough time at the easel. Holding the Taoiseach’s office for only two years, Reynolds did not have sufficient time to complete the portrait of Roisin Dubh (3) as he had envisioned Her.

When asked about his legacy, what words he wishes to have etched as his political epitaph, he unhesitatingly replied, “I want to be remembered as a man of peace” (4). True to his words, Reynolds took the political risks, pressing and pressuring the machinery of government to work for a settlement, a pathway to pacificity.

Years hence, when historians look back, what design will they see woven in the Irish fabric of the 1990s, what common bonds will they see holding the society together, what straggling edges will they view as frayed threads threatening to unravel the framework? Surely the infusion of continental cash helped jumpstart Ireland’s sagging economic engine and fired the pistons of progress into the twentieth-first century. And surely the initiation of the peace process, spearheaded by Albert Reynolds, will be viewed as a hallmark of achievement, a significant step away from the precipice of endless sectarian violence and paralyzing political possibilities, a cobblestone on the road toward a united Ireland—financially sound, religiously tolerant, geographically whole.

Reynolds departed his beloved Ireland for the eternal peace in 2014.