Why Mary Robinson is one of Ireland’s most respected figures

Mary Robinson was much more than Ireland's first female president. 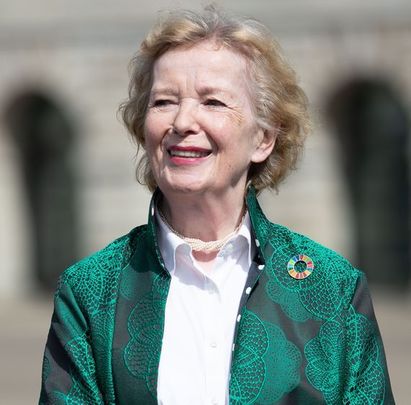 Mary Robinson is one of the most influential figures in Irish politics. Rolling News

As Ireland's first female President and a champion of human rights, Mary Robinson is one of the most influential and respected figures in Irish history, transforming the very landscape of Irish society and offering a source of hope for the downtrodden.

Robinson, who became President of Ireland in 1990, ushered in a new era of greater inclusion and equality for Ireland when she was elected, and utterly transformed the role of the Irish President.

Prior to Robinson's election, the Irish Presidency had been a low-key position viewed almost as a retiring home for aging politicians.

Robinson, however, used her newfound position of power to give a voice to the voiceless in Ireland and around the world.

She embarked on numerous humanitarian campaigns, preaching diversity and drawing Irish attention to a number of domestic and international issues.

She visited Rwanda, for instance, shortly after a gruesome civil war had ravaged the country to showcase the horrific suffering in the African country. Robinson became visibly emotional and upset in a press conference after her visit as she described the state of affairs in Rwanda and that press conference, coupled with her visit, helped to shed international light on the crisis.

Closer to home, http://www.corklgbtarchive.com/items/show/196Robinson invited members of the Gay and Lesbian Equality Network (GLEN) to Áras an Uachtaráin in 1992 at a time when gay sex was still criminalized in Ireland. Robinson's invitation was a clear signal that it was time to end prejudices against the LGBT community and she was widely lauded for the brave move.

Robinson's commitment to diversity became evident during her acceptance speech following her election in 1990. The newly-elected President of Ireland promised "a new Ireland" for all people in her famous speech.

"Because I was elected by men and women of all parties and none, by many with great moral courage, who stepped out from the faded flags of the Civil War and voted for a new Ireland, and above all by the women of Ireland, mná na hÉireann, who instead of rocking the cradle, rocked the system."

Robinson was the only Irish politician to meet the Dalai Lama on his tour of Ireland, despite pressure from the Chinese Government not to do so in addition to reported pressure from then Taoiseach Charlie Haughey.

But that has always been Mary Robinson's way. She has an uncanny habit of standing up for politically unpopular campaigns but always ending up on the right side of history.

She vociferously stood up against the Catholic Church, the most powerful organization in Ireland in the 20th century, and argued in favor of taboo subjects like abortion, contraception and divorce.

As President of Ireland, she met with Sinn Féin leader Gerry Adams at a time when Sinn Féin was censored by Irish and British media. Robinson's decision helped Sinn Féin to gain more credibility and ultimately helped the peace process in Northern Ireland.

Likewise, her visit to Prince Charles and Queen Elizabeth II in England helped to foster better relationships between Britain and Ireland at a time when the issue of Northern Ireland was particularly divisive.

State visits between Irish and British heads of state are now commonplace. That is almost all thanks to Mary Robinson.

There she continued to fight for the oppressed and became the first High Commissioner to travel to Tibet in 1998. Robinson frequently challenged international governments, including the United States' use of capital punishment and Ireland's immigration laws.

Like the Irish Presidency, Robinson transformed the role of the High Commissioner of Human Rights from a largely bureaucratic role to a role that publicly campaigns for human rights issues.

After leaving the post in 2002, Robinson continued to work with the UN and has aided several human rights campaigns since.

She is now a prominent environmental activist, frequently urging people to rethink how they treat the planet.

Robinson now uses public transport and no longer eats meat in a bid to save the planet and asks people around the world to make climate change personal in their lives.

She continues to fight for the new Ireland that she promised in 1990 and continues to shine as a beacon of hope for the hopeless and as a voice for the voiceless.

There have been few politicians that have had as much impact in shaping Irish society and she is undoubtedly one of the most important figures to ever grace this small island.

Read more: Inspiring Mary Robinson quotes on the anniversary of her inauguration as President of Ireland