A thanks to John Hume

Contributor Ed Neafsey urges "Irish Americans who consider themselves to be 'united Irelanders'" to offer John Hume a heartfelt thanks. 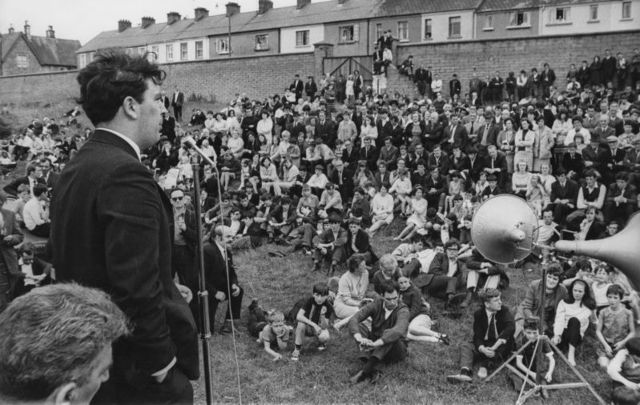 August 10, 1969: John Hume addresses a Catholic meeting at the Celtic Park football ground in Derry before a parade by the Protestant Apprentice Boys of Derry. Getty Images

John Hume's lifetime of work sets an example for those who want a united Ireland to follow, writes Ed Neafsey.

History says, don’t hope on this side of the grave

But then, once in a lifetime the longed-for tidal wave of justice can rise up

And hope and history rhyme.

John Hume’s brave and steadfast commitment to peace and reconciliation in Northern Ireland made hope and history rhyme. Irish President Michael Higgins said Hume "shined a light of hope throughout the darkness" of the Troubles. And he was an architect of the Belfast/Good Friday Peace Agreement (GFA) that ended it.

Hume is the only person to receive the Gandhi Peace Prize, the Martin Luther King, Jr. Peace Prize, and the Nobel Peace Prize. His legacy of non-violence, peace, and reconciliation has secured him a place in Irish history alongside the “Great Emancipator” Daniel O’Connell.

Hume was a member of the British and European Parliaments, as well as Stormont. He was a constitutional nationalist. He believed a united Ireland could only be achieved with the consent of the people of Northern Ireland.

Hume called “consent” the peaceful and democratic way to win unity in an “agreed Ireland.” He convinced others - including the Sinn Féin political party - to embrace the principle of consent as the way to achieve a united Ireland.

Re-unification based upon “[c]onsent freely given north and south” is a keystone provision in the GFA. The GFA calls for a border poll to be held when it “appears likely” to the British Secretary of State for Northern Ireland that “a majority of those voting would express a wish that Northern Ireland should cease to be part of the United Kingdom and form a part of a united Ireland.”

It is unclear how far off that day will be? Before it arrives, however, more needs to be done to foster reconciliation and a shared society in Northern Ireland. Hume’s lifetime of work on these issues sets an example for all who seek unity to follow.

Hume showed the power of working together and building trust through, as he said, “spilling sweat not blood.” For this, Irish Americans who consider themselves to be "united Irelanders" should join me in expressing a heartfelt thank you.