"I was overcome with grief because I would never get to meet the Irish girl with red hair." 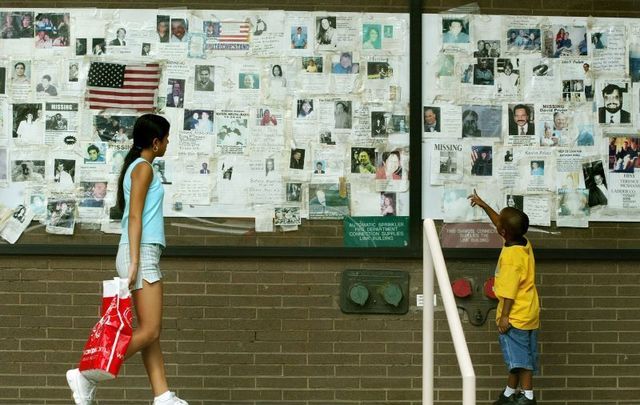 A wall of missing persons posters after 9/11. Getty Images

Dermot McEvoy recalls living in New York City on September 11th, and how one poster of a missing woman stood out

On the morning of September 11, 2001, I was in my office at Publishers Weekly on West 17th Street in Manhattan putting the finishing touches on a profile of Pulitzer Prize-winning journalist Haynes Johnson.

Just before 9 a.m. someone came into the office and said that an airplane had hit the World Trade Center. I immediately went to an office window looking south to see if I could see anything, but was not successful. There was no smoke in the air so I figured how bad could it be? Moments later everyone was in the conference room watching TV as a second plane hit.

My friend and boss, Mike Coffey, turned to me and said he had to go get his son, Gabe, from the Little Red Schoolhouse on Bleecker Street. “I’ll go with you,” I said.

The thing that still sticks in my mind is that it was maybe the most beautiful day of the year. There wasn’t a cloud in the sky and it was a very hot 82. Maybe it was to be the last real day of summer. I also thought that two planes hitting the WTC in this weather was no accident.

As Mike and I approached 7th Avenue and 14th Street he suddenly said, “I need a drink.” The last thing I needed was a drink but Mike pointed towards Flannery’s bar just off the corner. It probably was about 10 a.m. by now and I expected the bar to be empty. Much to my surprise, I got my third shock of the day when the very long bar was elbow-to-elbow with every kind of mankind, from construction workers to white-collar guys in suits. There was no conversation as all eyes were glued to CNN.

One beer later we were off down Seventh Avenue. At St. Vincent’s Hospital, all traffic was stopped because a triage center had been placed right in the middle of the avenue at 12th Street. In all my years of living in the Village, it was one of the most bizarre sights I had ever seen. Medical equipment was spread the length of the block as hospital personnel waited for the first injured to arrive. What is amazing is that there were very few patients because, apparently, if you were in the WTC you either died or survived without injury.

At the Little Red, we learned that Gabe had been picked up by a neighbor who lived in the Archives Building on Christopher Street near the river. On our way over there I passed a middle-aged man in a business suit. He had a briefcase in hand and walked very deliberately, heading north. The amazing thing about this man was that he was covered in white soot from head to toe. Only later did I realize that the man was in a state of shock from his abrupt start to the day.

We finally located Gabe. Outside, on West Street on the river’s edge, there was nothing but sirens. We walked down there and witnessed fire trucks and ambulances charging north, all covered with the deadly white soot that would kill so many of the first responders after the fact. The convoy of vehicles was endless.

My apartment was in a six-story walk-up. I had had over the years an unobstructed view of the World Trade Center. I saw them go up and now there was only the deadly smoke where they had stood. The smoke was so thick that in the darkness of night you could still see it. It would last for days and in the Village two miles away, you could smell it. I asked a friend of mine, Neil Granger, who had been a Marine in Vietnam, what the hell the stink was. “Incinerated flesh,” he replied. I realized that in Vietnam napalm had done the trick. Here in New York City, it was Boeing jets.

The stink would last days until a drenching rain would thankfully wash it away.

My last memory of that first day was the quiet. Traffic below 14th Street was cut off. For years I had slept to the rumble of cars heading to the Holland Tunnel down 7th Avenue, not really hearing them. Now, because of this strange quiet, I couldn’t sleep.

My Village neighborhood got back to normal, but there was one more heart-wrenching reminder of 9/11. At St. Vincent’s Hospital, a bulletin board had serendipitously sprung up. There were “wanted” posters of the missing people down at the WTC put there by their grieving families. These were mostly happy family photos, taken at weddings and christenings and birthday parties. One girl with red hair and an Irish name caught my eye. Her eyes had a sparkle to them. She had a big smile that showed that she would be a lot of fun at a party.

The poster had key descriptions on it: height, weight, etc. This redhead had a unique characteristic. She had a green shamrock tattooed on her right buttock. I began to laugh, then I was overcome with grief because I would never get to meet the Irish girl with red hair and the Celtic Blessed Trinity painted on her bottom.

She was—like the other 3,000 victims—gone forever and it was the city’s terrible loss, a loss that still reverberates to this day, so many years later.

* Dermot McEvoy is the author of The 13th Apostle: A Novel of a Dublin Family, Michael Collins, and the Irish Uprising and Irish Miscellany (Skyhorse Publishing). He may be reached at dermotmcevoy50@gmail.com. Follow him on his website or the 13th Apostle on Facebook.