"The truth is we will never know who betrayed the Franks, or who killed Michael Collins." 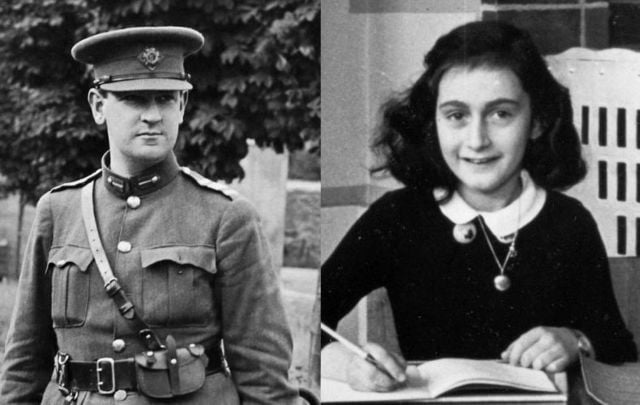 The simple answer to who killed Michael Collins or who turned in the Frank family is we will never know as the past will not give up its secrets and it is fruitless to think otherwise.

That reality has not stopped a collective rush to judgment by the media worldwide as to who betrayed young Anne after the publication of a book identifying and naming the perpetrator allegedly.

Except the book, “The Betrayal of Anne Frank,” is nothing of the sort. It is a blatant libel on a man who can no longer defend himself and the account is so slickly packaged and publicized that a gullible public may well fall for it.

According to the book, the likely culprit is “Arnold van den Bergh, a Jewish businessman, father, and husband who was a member of the Jewish Council in Holland, a group that cooperated with the Nazis.”

The author of the new book is Rosemary Sullivan, who was head of a powerful team of writers, detectives, researchers, and academics all hell-bent on discovering the truth about the 78-year-old crime.

The New York Times says she “assembled an international cold case team of criminologists; behavioral, data, forensic and social scientists; psychologists; a handwriting expert; a rabbi; and many others."

But the opening scene on “60 Minutes,” which did a feature on the book, shows a hapless retired FBI agent checking for new clues in the Frank apartment, now a museum, which millions have visited. Finding new clues after all this time and people traffic there would be like finding a needle in Penn Station.

After lots of profound musing and artificial intelligence acrobatics, they came up with the name of Van den Berg, the only real evidence a long ago anonymous note to Anne Frank’s father that he was the one. As we know from Twitter, anonymous notes have the value of a pocket full of Monopoly money.

It is easy to demonise someone who worked with the Nazis against his own people but many thousands did, the same as many Irish were informers. The revelation that he was on the Jewish Council does not make him guilty of giving away Anne Frank no matter how ugly his behavior was in order to survive.

Even if he did, it is understandable on one level, alas. Indeed the rabbi interviewed on “60 Minutes” asks by far the most profound question: What would you have done to save your own family, would you have informed?

Also, we ask how could he have gotten the information, if true?

Indeed, the last people the desperate Frank family and others would have wanted to have their information would have been members of the Jewish Council-- collaborators with the Nazis.

Like with Micheal Collins, you deal with shifting sands. For decades, Sonny O’Neill was the name most discussed as to who fired the fatal shot at the ambush at Béal na Bláth in 1922.

It now turns out O'Neill was not the master sniper long thought, indeed he was discharged from the British army on disability with severe injuries to his arm that would have made it likely impossible for him to fire and hit Collins.

The shot that killed Collins has fired from 450 meters away at twilight, both sides agree on that, hardly a likely feat for a  man with a withered arm.

When that theory came under close scrutiny, attention instead turned to Emmett Dalton who was in the Collins party and who purportedly was part of a British plot to get Collins who they were afraid was about to restart war in Northern Ireland. He shot Collins in the head from behind is another version of the tale.

Hmm, maybe Collins shot himself just for the fun of it, maybe he liked playing Russian roulette.

The truth is we will never know who betrayed the Franks, or who killed Michael Collins. In the meantime, make way for the next outlandish theory on who did what to whom ... (JFK Junior killed JFK, haven’t you heard?)