The Irish American stories behind the quarterbacks of the New England Patriot and the Atlanta Falcons. 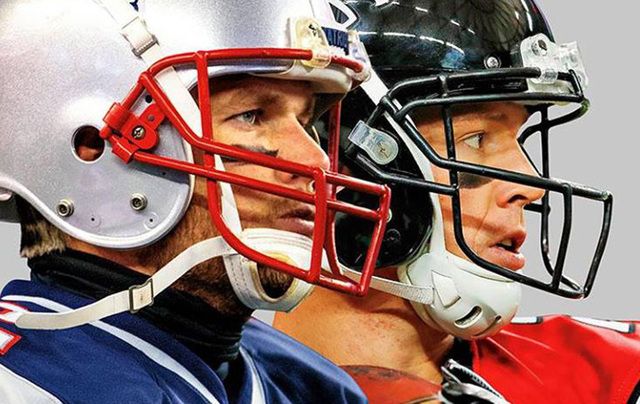 He’s the star yet again of the Super Bowl, but if ever there was an underdog Irish story, Tom Brady (39) is it.

The New England Patriots hero was selected 199th in the famous 2000 draft that saw five quarterbacks picked ahead of him.

All of those guys are now in sweatpants, probably overweight munching Doritos watching the Super Bowl today from their man cave.

Step Forward Chad Pennington, Giovanni Carmazzi, Chris Redman, Tee Martin, Spergon Wynn and Marc Bulger. Let it be known that you were picked in the 2000 draft before the greatest quarterback in football history.

Brady as always will be center stage in Houston, but it was a long climb from unrated rookie to star man. He says it was his underdog Irish spirit that kept him focused at the time  -- but no doubt his Irish temper was up when he was picked in the second last round.

“My father is 100 percent, Irish. We took a trip over there together and visited some of the places where my family came from,” says Brady. “That was a great experience for me, and obviously, I am very proud of my Irish roots.”

Brady is no stranger to Britain and Ireland and spoke of the fond memories he had of golfing trips he took to the Emerald Isle and Scotland.

And Brady, through his father, Tom Sr., is aware of his own Irish history.

For all Irish and Irish-American fans of the gridiron, knowing that the greatest New England Patriots to ever don a shirt is proud of his Irish blood is one more element to consider in this Super Bowl. The term “underdog” and “fighting Irish” might have been invented for him.

Matt Ryan ready to fire for the Falcons

Matthew Thomas Ryan has the Irish look all right.

The Falcons Quarterback at 31 is the new kid on the block amazingly despite being drafted in 2008 out of that Irish hotbed Boston College.

Back then he stood out for the wrong reasons “Freshman year, Matt was this skinny dude we used to make fun of – scrawny, super-pasty, Irish Catholic-looking dude,” Ryan Poles, his college roommate and left guard told the LA Times.

“His image was always of this fragile kid. But on the practice squad, when we were giving a look to the first-team defense, his goal was to absolutely torch them. It would drive the defensive coaches nuts. They would have such a horrible feeling going into the game because Matt was ripping them apart. And as he started getting confidence, he’d be talking crap during practice.

“So, then you’ve got this kid who looks like that and then has this fire inside of him, and you’re like, `Holy smokes, this kid is going to be a player.’”

Ryan grew up in the New Jersey shore town of North Wildwood, the third of four children: Michael, Kate, Matt, and John.

There are scores of Irish cousins all former Eagles fans, Now the Ryans, McGlinchey's, Hartmans, Tarpey's, McCains and Loughreys — cheer for the Falcons.

“I was raised in a huge family where family means everything,” Matt told Philly Voice ,“We (family and friends) have a lot of fun with the Eagles-Falcons thing, but I know where my family and friend’s loyalties lie when we play the Eagles.”

Sam Loughery his grandfather was the father of six, five girls and a boy, and grandfather of 23 (18 are boys).

“I’ve always taught my grandchildren that it’s fundamentals that win games,” he told Philly Voice in 2014. “You play with a bat, ball, and glove, never your mouth. It’s what I preached to all of my children and grandchildren. You win through skills, not attitude. It’s why you’ll never see Matt talk (trash). It’s not the way he was raised by his parents because I didn’t raise my kids that way.

“He’d rather it be that way,” McCloskey continued. “If you want to talk just about him, it’s going to be a short conversation.”

Mike Ryan, Matt’s father, said of his son: “Personal accolades have never been a goal. He’s always had that perspective.”

“My parents taught us family comes first, no matter what,” Kate his sister says. “If Matt played for the Giants or even Dallas, we would have to root for them. “The beauty of all of Matt’s success is that he hasn’t changed at all,” Mike Ryan said.

“He still loves spending a few weeks in Wildwood each summer, playing whiffle ball with his cousins. He still comes back home and supports the Little Quakers (who Ryan played for). If he wasn’t in the NFL playing for the Falcons, Matt grew up loving the Eagles and would probably still be an Eagles’ fan.”

On Sunday, the two close-knit Irish families will square off as two sons of Erin, Brady and Ryan battle for supremacy. It promises to be a clash of Titans. May the best man win.