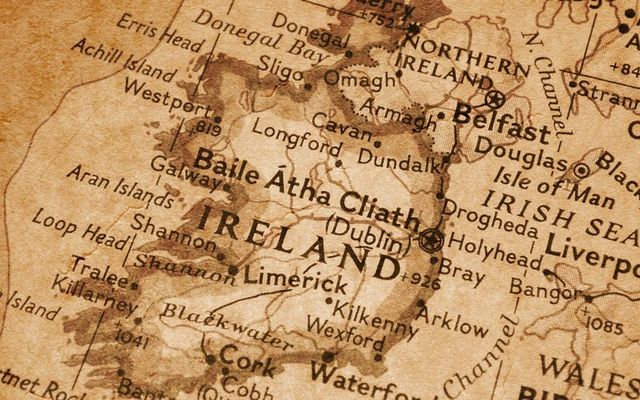 Map of the island of Ireland. Getty

“People have to realize what is happening. The Orange State is gone and we are closer than ever to a united Ireland.”

Sinn Fein minister Gerry Kelly, a key figure in the peace process was in New York, last week. He was commenting on the Northern Ireland census released on Friday last that showed the demographics  moving decisively in the nationalist direction.

Few in world conflict have traveled the road Sinn Fein minister Gerry Kelly has. Kelly has run the gauntlet in so many ways from being the most wanted man in Britain and Europe at one point to a senior figure in the government of  Northern Ireland, the state he fought tooth and nail to drive the British out of as a senior figure in the IRA.

You know something profound has happened when Gerry Kelly of all people completely agrees with the policy of Sinn Fein to embrace the late Queen Elizabeth and to extend warm wishes to King Charles III. It seems as  absurd as an elephant trying ballet.

Kelly, however, puts it very simply-- the Queen went to Ireland in 2012 on a state visit and honored the nationalist tradition there she subsequently met with Martin McGuinness and separately, the new king, then Prince Charles, met with Gerry Adams some years back. That deserves respect, says Kelly.

For him it all revolves around the notion of respect which was so lacking in how unionists treated nationalists for 50 years until The Troubles appeared like a gathering storm.

Kelly’s resume back then would probably have only got him employed by the French Foreign Legion. From bombing the Old Bailey to a 60-day hunger strike to organizing the most epic prison break out in recent history to peace advocate, elected politician and now minister in the stalled government Kelly has done it all at 69-years old.

He is part of the old guard, the original defenders of nationalist areas at the beginning of the conflict who sees no contradictions in his embrace of peace after war which saw him become one of the most important supporters within the armed movement to back the IRA ceasefire and Good Friday Agreement.

I was privileged to speak at the inaugural dinner of the Martin Mc Guinness Foundation in New York alongside Matin’s wife Bernie and son Emmett. pic.twitter.com/LrVSfIuqWm

He was in New York and Washington to meet with Irish American leaders and to address the Martin McGuinness Foundation. He was in America when the stunning census numbers from Northern Ireland showing Catholics in a  majority in the North landed with an explosive thud.

Kelly sees it as a pivotal moment.

“It is a wake up call. We have been saying that for some time, change profound and deep is on the way.”

Kelly does not want to coerce unionists into a united Ireland like 600,000 Catholics were corralled against their wishes into Northern Ireland.in 1922. The next step is to establish dialogue among every involved party, including unionism and all the political parties and community groups in Ireland, in Britain and the USA. Everything should be on the table.

"I think we are closer than ever,” he says.

America is a huge part of the equation he says, pointing out that the intervention of leaders like President Clinton and George Mitchell, as well as community organizations, was vital in securing the Good Friday Agreement.

The other issue he was discussing in America was the legacy one, the need to give some kind of closure for the victims of The Troubles from all sides. It faces a difficult passage with leading British politicians falling far short in their reaction but Kelly is hopeful again that Irish American pressure can yield results.

As for unionists he does not foresee a ‘Road to Damascus’ conversion to accepting a united Ireland anytime soon but the latest census figures showing Catholics at 45.7 percent and Protestants at 43.4percent  restates the  obvious. The Orange State built to last forever as a Protestant redoubt has turned a lighter shade of green. Yet Sinn Fein seeks dialogue, not coercion he says.

As to Sinn Fein leading polls in the Irish Republic and having the largest party  in Northern Ireland, Kelly is especially proud of the young people and new leaders like Mary Lou McDonald and Michelle O’Neill in the North. He says there is a great age range within the party from the veterans, some now in their 70s, all the way down to committed 20 somethings who regard Sinn Fein as the future.

”It’s about managing the momentum,” he says, reflecting on the extraordinary rise of Sinn Fein North and South.

It’s a different world than what Gerry Kelly faced when the Troubles broke out and chaos ensued. Now Sinn Fein are slowly taking control of the bus rather than sitting in the back and so the journey begins. Gerry Kelly is proud to be on board.